Police search for teens responsible for spree of robberies, random attacks in Lakewood

The Lakewood Police Department (LPD) is warning people in Lakewood and Tacoma to be aware of their surroundings and report any suspicious activity. Based on the surveillance video from each incident, the suspects are dangerous and appear to attack at random. The victims' ages range between 18 and 78 years old.

LAKEWOOD, Wash. - Police are working to identify a group of teenagers who committed a series of violent robberies in and around Lakewood earlier this week.

The Lakewood Police Department (LPD) is warning people in Lakewood and Tacoma to be aware of their surroundings and report any suspicious activity. Based on the surveillance video from each incident, the suspects are dangerous and appear to attack at random. The victims' ages range between 18 and 78 years old. 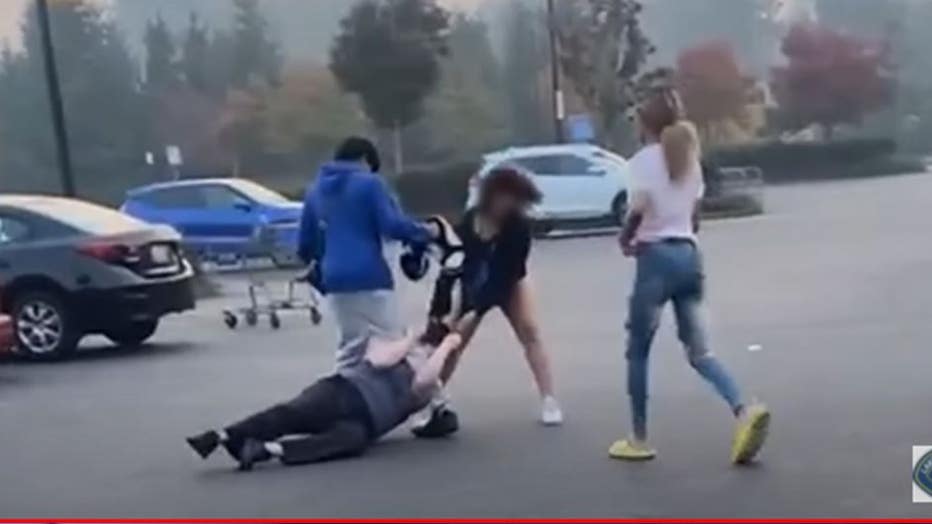 According to the LPD, officers reviewing surveillance footage were able to catch several of the suspects at the Lakewood Walmart on Bridgeport Way on Friday. Authorities say the teenagers with probable cause were taken into custody, but they still need help from the public to identify the remaining suspects.

One of the victims spoke with FOX 13 News on Friday. The 23-year-old woman and her fiancé did not want to be identified, fearing retaliation.

"It was nothing too serious, I just bruised up my face, mainly," she said. "It could have been worse."

According to investigators, the woman was attacked shortly after 6 p.m. on Wednesday in the Lakewood Walmart parking lot. She told FOX 13 News that she had just placed her groceries in her car when three young strangers approached, instigating an altercation that turned quickly to physical force. She said they all went to the ground during the scuffle, and in seconds, they had her keys.

"(One) got into the driver’s seat and everybody else scrambled into the car," she said.

In a split second, she lept onto her vehicle’s hood in an attempt to keep the strangers from stealing it. She told FOX 13 News the driver hit the gas, flinging her off the car onto the asphalt.

The woman’s fiancé received a phone call from medics telling him that she had been injured. While she will recover, he believes the suspects should be treated as seriously as their alleged crimes.

"I feel like they were looking for easy targets, so people that were alone and couldn’t defend themselves," he said. "These are kids who think they can get away with it and won’t get tried as adults."

Lakewood Police said they arrested three suspects Thursday between the ages of 14 and 17, who had returned to the Walmart parking lot in the 23-year-old woman’s stolen car.

Lakewood Police believe the same suspects also stole two cars from Tacoma on Oct 18 and Oct 19. Both victims were ride-share drivers for Uber and Lyft. Both of them were assaulted, and one of them claimed to have had a gun pulled on him during the robbery.

RELATED: Tacoma woman takes recovery measures into her own hands when vehicle is stolen