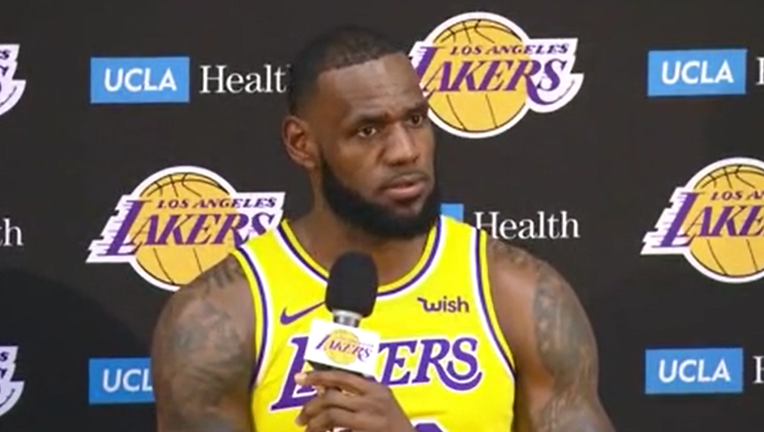 LOS ANGELES - Los Angeles Lakers superstar LeBron James is making headlines off the court for his post on social media about the Columbus, Ohio shooting that killed a Black teenager.

On Tuesday, police in Columbus released body camera video that showed one of the responding officers opening fire at Ma'Khia Bryant, a Black teenager, killing her.

Police shot and killed a teenage girl Tuesday afternoon in Columbus just as the verdict was being announced in the trial for the killing of George Floyd.

In the video, the girl appears to try to stab two people with a knife before she was gunned down by the officer.

Hours after police released the video, James -- an Ohio native --  shared an image of the officer involved in the deadly shooting with the caption, "YOU'RE NEXT" with the hashtag, "ACCOUNTABILITY."

The Lakers superstar later deleted the social media post. James explained he took it down because the post was "being used to create more hate."

"This isn't about one officer," James tweeted, in-part. "It's about the entire system and they always use our own words to create more racism."

The Lakers superstar added that anger may have played a role in the controversial post and vowed to do more research on the deadly shooting.

"ANGER does any of us any good and that includes myself! Gathering all the facts and educating does though! My anger still is here for what happened that lil girl. My sympathy for her family and may justice prevail," he said, in-part.

Waters was also accused of inciting violence by her peers for her comments on the possibility that former Minneapolis police officer Derek Chauvin could be found not guilty in the murder of George Floyd.