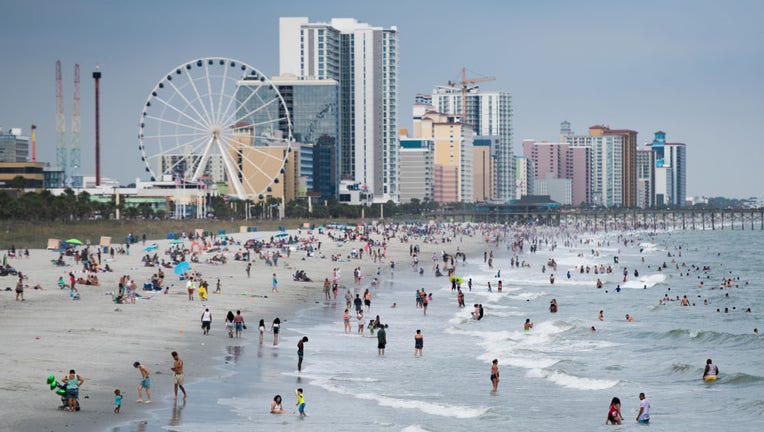 It was bound to happen, America. Summer is coming to a close. But not before we get one more celebration in to hold onto the dog days of summer.

Millions of people will be hitting the roads and taking to the skies to celebrate Labor Day. But for millions of Americans, scorching temperatures and the risk of rain and thunderstorms could dampen those last cookouts, clambakes and afternoons at the beach.

Here's a closer look at the Labor Day holiday forecast from the FOX Forecast center.

TRAVELING THIS LABOR DAY WEEKEND? WHETHER FLYING OR DRIVING, HERE'S WHAT TO EXPECT 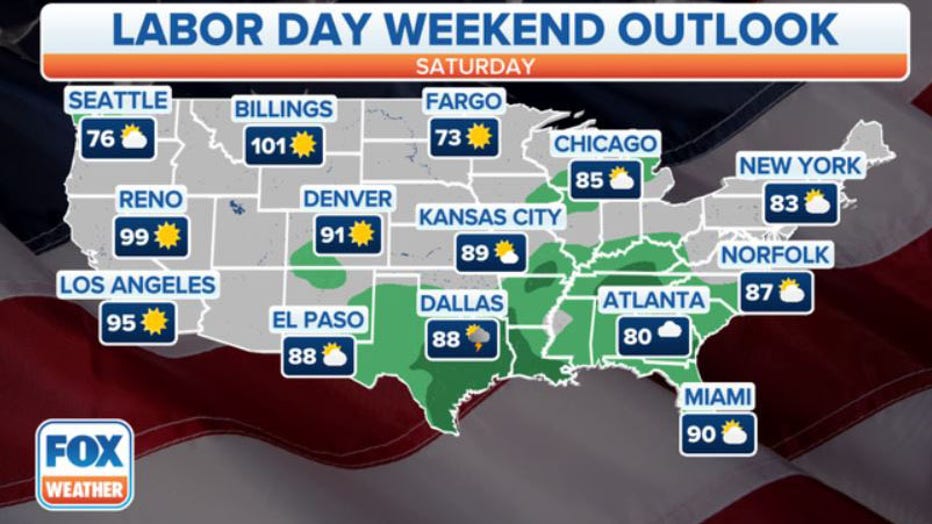 There will be a wide range of weather conditions across the Lower 48 on Saturday, from rain and thunderstorms along the Gulf Coast and Southeast to temperatures reaching the triple digits in parts of the Plains and western United States.

In the Southeast, the greatest chance of seeing rain and thunderstorms will be seen from Dallas and Houston, east through Louisiana, all the way through to Florida.

Temperatures will be in the 80s and 90s from Denver through Kansas City, Missouri, and into Atlanta and Miami.

In the Northeast, temperatures are expected to be in the 80s in places like New York City, Boston and Providence, with a mix of sun and clouds.

Temperatures in the West and Plains will be extremely hot.

Billings, Montana, is expected to reach a high temperate of about 101 degrees on Saturday with plenty of sunshine.

Seattle will be much cooler, with a forecast high of about 76 degrees with some clouds.

Temperatures will be in the mid- to upper 90s from Reno, Nevada, to Los Angeles, with bountiful sunshine.

HOW TO TELL THE DIFFERENCE BETWEEN HEAT EXHAUSTION AND HEATSTROKE

The best time to go outdoors during a hot summer day is in the early morning or late in the evening, when temperatures tend to be cooler than during the afternoon.

If you need to go outdoors during the heat of the day, experts advise you to wear loose, light-colored clothing and drink plenty of fluids.

The dangerous heat can make vehicles deadly for anyone left inside without air conditioning running. Make sure to "look before you lock" to ensure you have not left any children or pets unattended.

HURRICANE SEASON 2022 RUNNING BEHIND SCHEDULE: HERE ARE THE IMPORTANT BENCHMARKS TO WATCH FOR 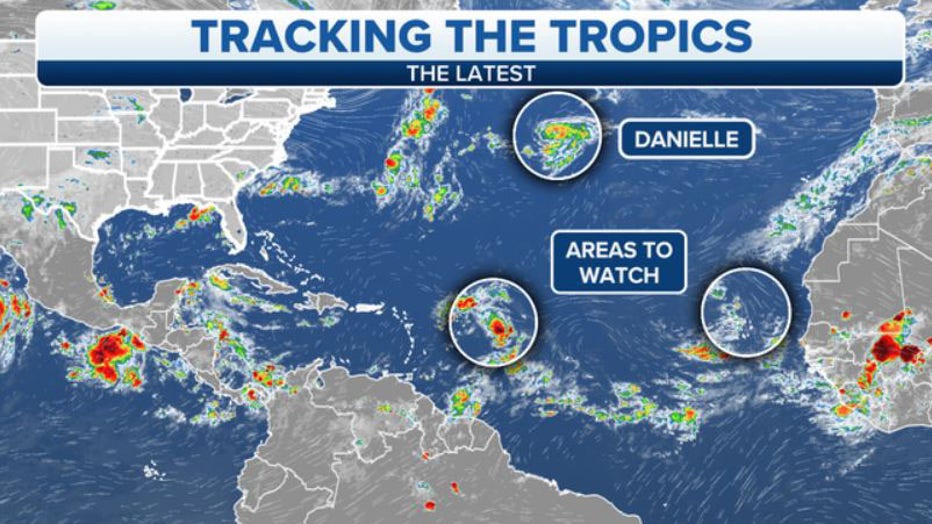 The FOX Forecast Center is also keeping an eye on several tropical disturbances that are brewing in the Atlantic Ocean, including Tropical Storm Danielle.

Tropical Storm Danielle is no threat to land, but the storm's formation is a sign that the tropical Atlantic may be coming to life after a quiet August. 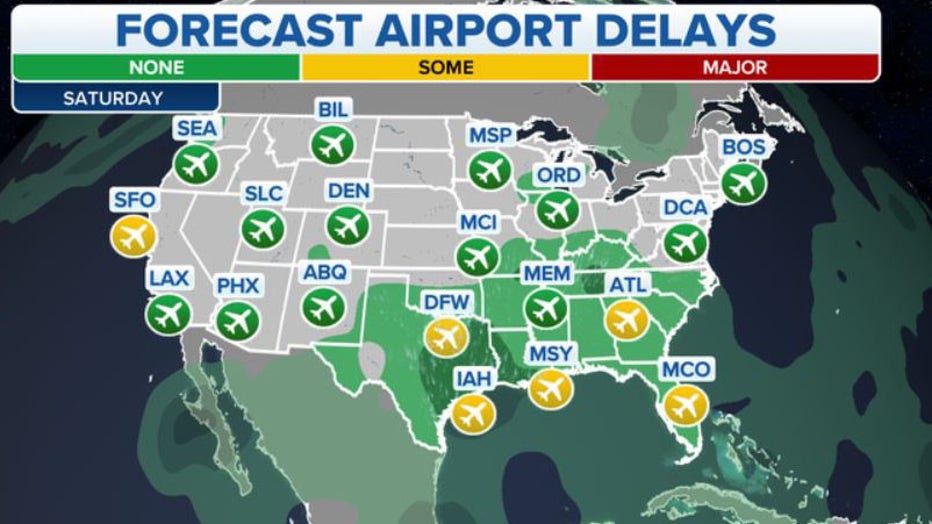 The less-than-ideal weather conditions in the Southeast could also lead to some delays for those heading to the airport.

Some delays are possible in Dallas, Houston, New Orleans, Atlanta, and Orlando.

Out west, some delays are possible in San Francisco with the marine layer fog.

As always - check with your airline for the latest information on your upcoming flight before heading off to the airport. 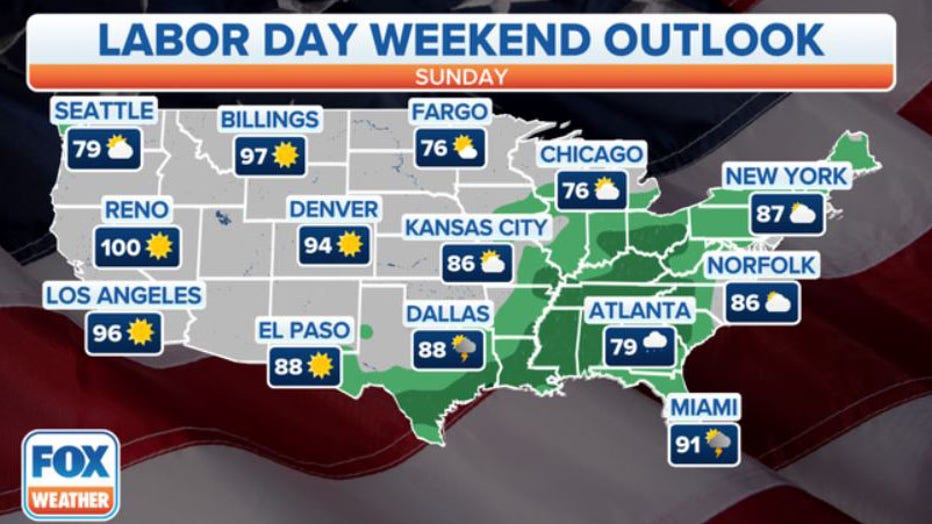 Heading into Sunday, the threat of rain and thunderstorms will shift a bit to the east.

The threat will linger for the Lone Star State and along the Gulf Coast, but chances for showers extend north through the Mississippi and Kentucky valleys, as well as the Great Lakes and into the Northeast.

Rain chances will also be seen in the mid-Atlantic and Southeast.

Temperature-wise, the FOX Forecast Center is seeing another day of triple-digit temperatures in parts of the West and Southwest, while places around Atlanta will reach the 80s.

From the mid-Atlantic and Northeast, temperatures will also be in the mid- to upper 80s.

Seattle will again hover around the 80-degree mark as well, and Billings will be "slightly cooler" than Saturday with a forecast high of about 97 degrees.

And heads up, this has also been the summer of the shark along East Coast beaches.

And on Cape Cod in Massachusetts, at least 20 sharks were spotted in the water over the course of a week. 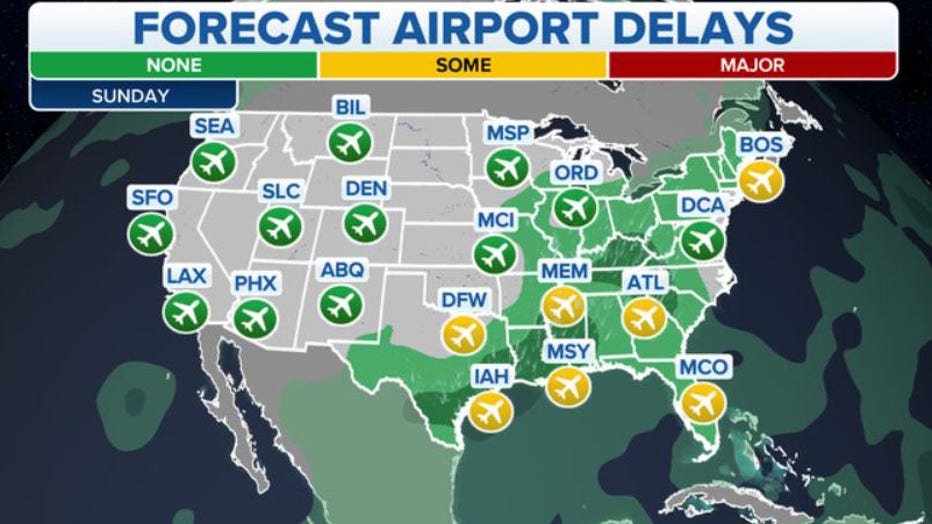 If you're going to the airport on Sunday, you may need to prepare for delays and cancelations depending on where you're catching a flight.

The FOX Forecast Center is expecting some issues at airports in Boston due to weather, and major airports in the South and Southeast are also at-risk of seeing some problems.

Dallas, Houston, New Orleans, Memphis, Atlanta and Orlando could all see some issues, so check with your airline directly for the latest information. 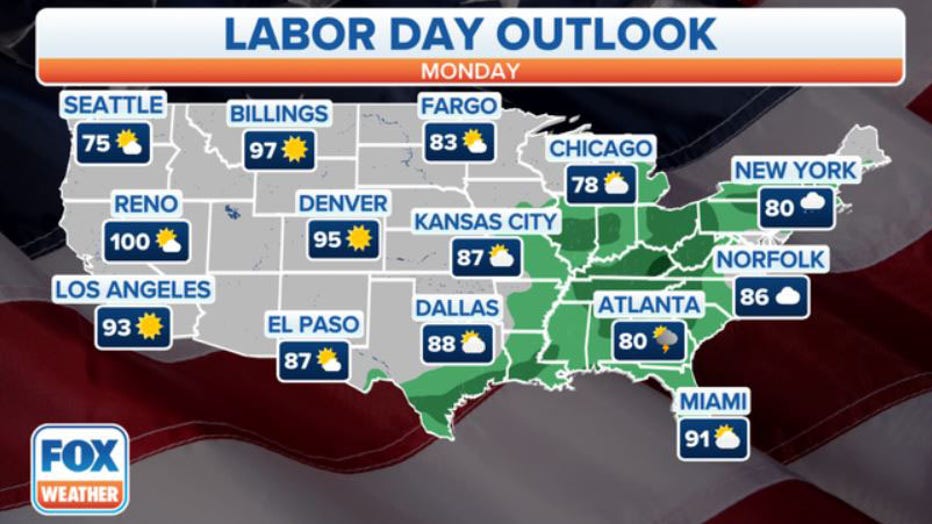 The threat of sub-par weather will continue across the eastern half of the United States, with more chances of rain and thunderstorms across places from the Southwest, Midwest and Northeast.

There's a chance of rain from Norfolk, Virginia, north through the Big Apple and New England, but temperatures will range from the low to mid-80s across much of the region.

If you're looking for sunshine (like most people), you'll want to head west.

Denver will be very hot at 95 degrees with plenty of sun, and the heat will extend to Billings, where the area will likely see a high temperature of around 97 degrees.

Temperatures get hotter the further west you go, so places like Reno will see a high temperature of about 100 degrees on Labor Day.

Temperatures will remain on the cool side in the Seattle area, where the Emerald City will likely remain in the mid-70s.

If you've been meaning to get out to one of our country's beautiful national parks before the end of summer, you've got a lot of catching up to do if you want to be like this grandma-grandson duo.

Grandma Joy Ryan and her 41-year-old grandson have been crisscrossing the country on a mission to visit every single national park in the country, and they've only got one left to visit.

Their ambitious quest began with a road trip to the Great Smoky Mountains National Park in 2015. In the past seven years, these intergenerational travelers have driven more than 50,000 miles to visit 62 out of 63 parks on their bucket lists.

7 FACTS ABOUT US NATIONAL PARKS 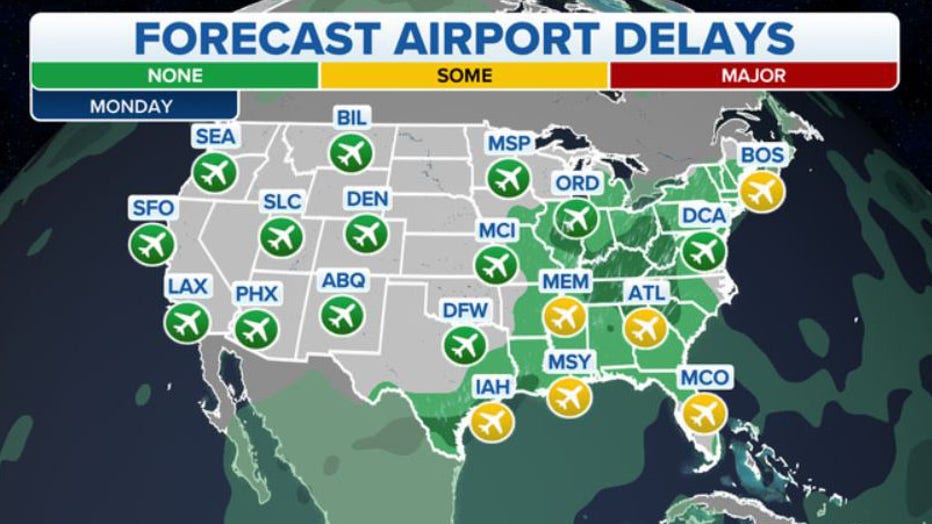 In terms of issues at the airports in the country, most of the problems will likely be in the same locations that could see delays and cancellations over the course of Labor Day weekend.

Houston, New Orleans, Memphis, Atlanta and Orlando will likely see more issues, and passengers should arrive at the airport with plenty of time to space in order to get through security and check bags.

But, again, don't waste a trip to the airport if you don't have to - reach out to the airline directly to make sure things remain on the up and up.