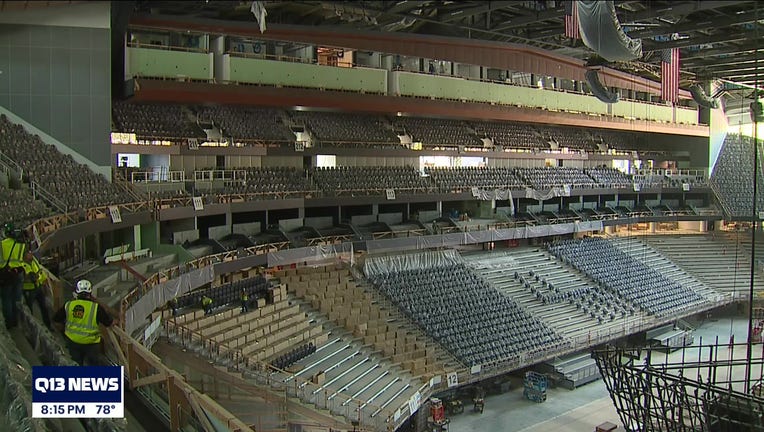 SEATTLE - Seats have been bolted into position throughout the upper deck and into the lower bowl. All the concrete has been poured and on the floor of Climate Pledge Arena, the outline of the rink is waiting to be covered in ice.

Builders say the home for the newest NHL franchise, the Seattle Kraken, remains on schedule to be ready by the middle of October, when the NHL season is expected to begin.

"It’s just making certain that everything’s done quality, top quality, because really, we’re into the finish work now," Ken Johnsen, construction executive with Oak View Group, said Monday. "The biggest issue is just getting the work done, making certain that it’s ready to be turned over and ready to go."

It’s not a mad rush, but it is a compressed schedule to get most of the work done to have the building ready for the Kraken to begin about three months from now. It’s expected there will be a week of festivities including musical acts surrounding the first Kraken home game, but indications are Seattle will begin its first NHL season on the road. The league schedule is expected later this month or early August.

Seattle announced last week that its home preseason games will be played at three different locations around Washington state in venues used by teams in the Western Hockey League. While it’s great outreach for the first-year franchise, it’s also necessary as Johnsen said the arena will likely be undergoing systems testing around the time of the first preseason game on Sept. 26.

The construction team expects 93% of the project to be completed by the end of July and has more than 1,000 workers on site.

"We really want by mid-September, we want to be in really good shape where we feel like everything is in place, and then you test, and you test and you test ... You check everything," Johnsen said.

The building — constructed under the original roof of the Seattle Center Coliseum — will likely have a final price tag of more than $1 billion. Construction included supporting the 44 million-pound historic roof on temporary supports while dirt was dug out of the former bowl to create a massive increase in space to roughly 800,000 square feet.

The bigger arena is noticeable when standing on the floor, but in the seating bowl, the building feels intimate with clear sight lines of the ice or basketball court. The arena will be home to the WNBA’s Seattle Storm, and fans hope the NBA will return sometime in the future.

"We have a tight schedule. We’re gonna make it but there’s just a lot of work to be done," Johnsen said.