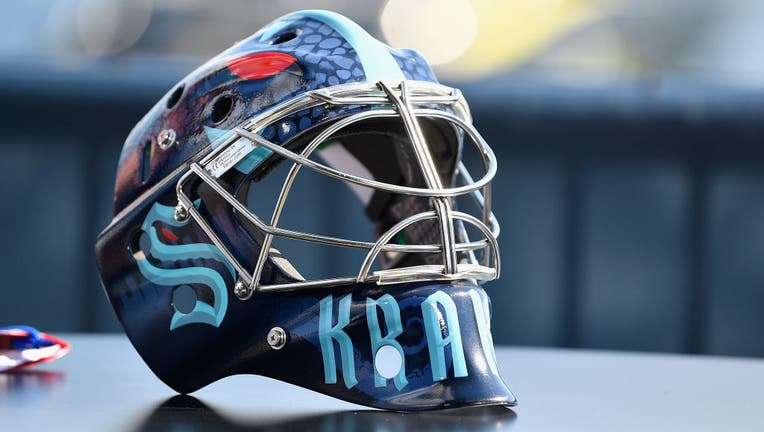 SEATTLE - Philipp Grubauer is going from anchoring a Presidents Trophy-winning roster to the unknowns of playing for an expansion franchise.

The Seattle Kraken had plenty of money to throw at Grubauer to make it happen.

After a somewhat underwhelming expansion draft, where Seattle landed some foundational pieces but also focused on preserving salary cap space, the Kraken made a trio of signings on the first day of NHL free agency Wednesday. There was no bigger splash than agreeing to terms with Grubauer on a six-year, $35.4 million contract with an annual average value of $5.9 million.

Grubauer is the star of the three after finishing as a finalist for the Vezina Trophy for the first time last season. The 29-year-old Grubauer was 30-9-1 last season with the Colorado Avalanche with a 1.95 goals-against average and a .922 save percentage. He also led the league in shutouts with seven and didn’t lose consecutive games all season.

He will be paired with Chris Dreidger to form Seattle’s primary goaltending duo.

"We’re excited to add a goaltender of Philipp’s caliber, especially coming off of a season where he was a finalist for the Vezina Trophy," Kraken general manager Ron Francis said in a statement. "He was a part of a Stanley Cup-winning team and has been one of the top goaltenders in the league over the past few seasons and we’re happy that he chose to join our team."

With Grubauer and Dreidger locked in, the Kraken could be looking to move Vitek Vanecek after selecting him from Washington in the expansion draft. Vanecek appeared in 36 games for the Capitals last season.

Schwartz appeared in 40 games and had 21 points last season for St. Louis. He became a star during the Blues’ run to the Stanley Cup in 2019 when he had a team-high 12 goals.

Wennberg, 26, had a career-high 17 goals and had 29 points total in 56 regular-season games for Florida and will likely push for a spot as a top-six forward with the Kraken.