FLORENCE, Italy -- Amanda Knox vowed Friday to fight her conviction for the murder of British student Meredith Kercher "until the very end" and said she "will never go willingly" back to Italy.

Speaking on ABC's "Good Morning America," Knox said news of the guilty verdict Thursday "really has hit me like a train."

"I did not expect this to happen. I really expected so much better from the Italian justice system," she said. "They found me innocent before. How can they say that it's guilt beyond a reasonable doubt?"

An appeals court found Knox and her former boyfriend, Raffaele Sollecito, guilty of murder in the Italian city of Florence after a retrial.

Her attorney, Ted Simon, told CNN's "New Day" that he had been in touch with Knox and her family all day as they awaited the court's decision.

"It was terrible news," he said. "She understands more than anyone that a wrongful conviction is unjust, not just for the accused but for the victim, their family, as well as society, and she feels this very personally."

Knox's conviction has raised questions about her possible extradition to Italy to serve her 28½-year sentence, handed down in absentia, since she has been in the United States throughout the retrial. 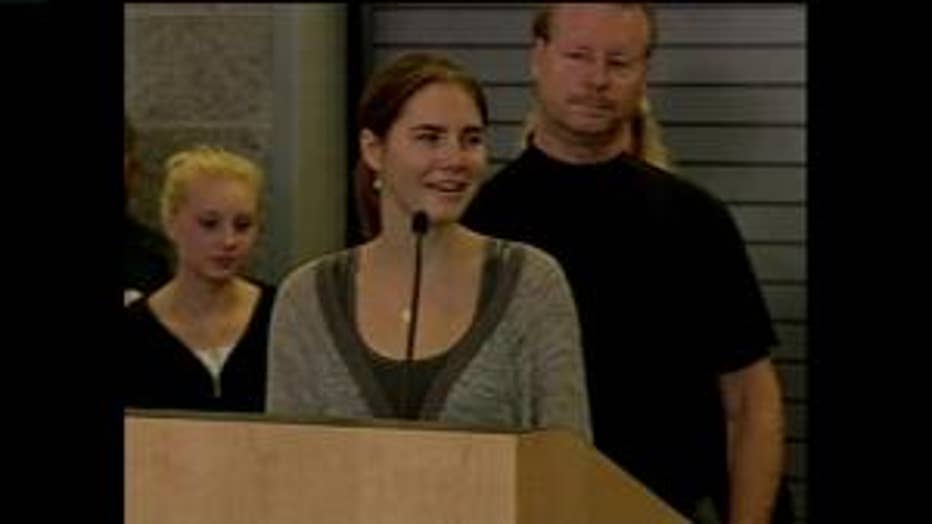 But Simon said it was too early to talk about extradition since there is still an appeals process to go through, which will probably last another year.

Knox, 26, told ABC she would fight every step of the way.

"I will never go willingly back to the place where I -- I'm gonna fight this until the very end," she said.

Asked how she was coping with the situation, her attorney highlighted her strength of character.

"While she accepted that very difficult news, she has rebounded. She has shown great resilience and fortitude. And with a great deal of family support, they're going to go forward and appeal what we would characterize as a completely unjust conviction," Simon said.

The attorney argued there was "no evidence" implicating his client in the murder and never had been, adding that it was "incomprehensible" that the court had found her guilty.

Sollecito, who is not allowed to leave Italy while the legal process continues, was halted in the northern Italian town of Udine, police said.

The Slovenian border is less than 20 miles east of Udine, and the border with Austria lies about 55 miles to the north.

Prosecutors said the couple killed Kercher, a British student, in November 2007. Sollecito was sentenced to 25 years in prison. Both denied murder.

Kercher, 21, was found partially nude in a pool of blood in the house she shared with Knox in the picturesque town of Perugia, where both women were exchange students.

But despite years of courtroom battles over her death, many aspects of the crime still remain unexplained.

'Journey to the truth'

On Friday morning, Kercher's siblings spoke in Florence about their family's long ordeal.

Her sister, Stephanie Kercher, said the family might never know exactly what happened on the night of her death.

"I think we are still on the journey to the truth," she said. "I think it may be the fact that we don't ever really know what happened that night, which is obviously something we will have to come to terms with."

Lyle Kercher, Meredith's brother, said the family may have to wait until spring 2015 for a final resolution, since the verdicts reached Thursday can still be appealed at Italy's Supreme Court.

"Nothing is going to bring Meredith back, nothing will take away the horror of what happened to her," he said.

"The best we can hope for is finally bringing this whole case to a conclusion, having a conviction, and everyone can move on with their lives."

If the Supreme Court upholds the murder conviction, he expects to see Italian authorities make an extradition request to the United States so that Knox serves her sentence in Italy, he said.

She also appeared to rule out meeting with Knox in the future, despite the American's overtures to the family and whatever the final outcome of the case.

"We've asked to have our wishes respected in that we would like to be together as a family to remember Meredith," she said. "A lot has happened over this length of time. It would be very difficult to meet someone having had all that happen."

Knox and Sollecito were first convicted in 2009, but those charges were overturned on appeal in 2011 and the pair were freed, having spent four years in prison.

In March of last year, Italy's Supreme Court overturned the pair's acquittals, leading to the retrial that resulted Thursday night in their convictions for murder being reinstated by a Florence appeals court.

Knox, who remained at home in Seattle, Washington, while the retrial was held, said in a written statement Thursday that her conviction would bring no consolation to the Kercher family.

Presiding Judge Alessandro Nencini has 90 days to write his arguments behind the jury's ruling. Once that is out, lawyers have 90 days to appeal.