The men are accused of robbing a pot shop at gunpoint. Detectives have identified one suspect and are looking to identify the others.

Two of the suspects were armed with handguns and ordered the employees to get on the floor where they were held at gunpoint while the other two suspects filled their backpacks with approximately $5620.00 worth of marijuana merchandise and approximately $4509.00 in cash. 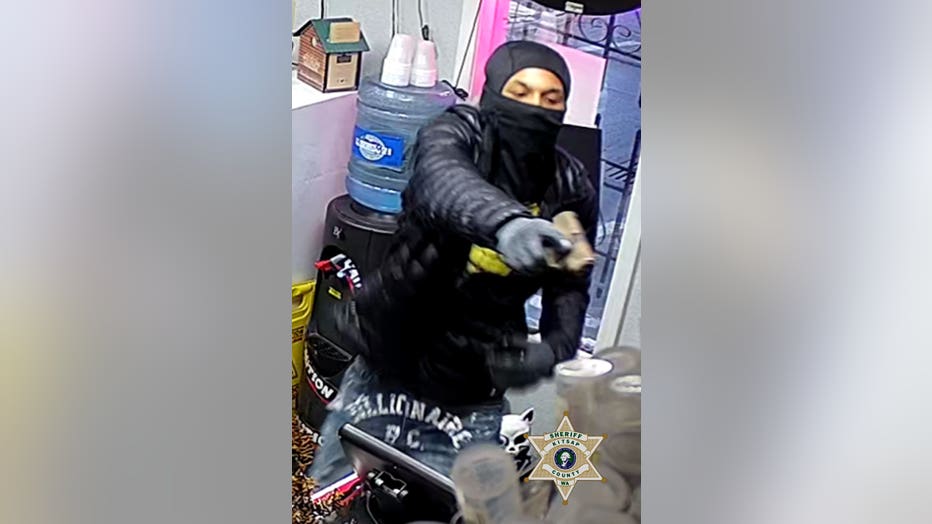 Detectives say they identified the suspect in the red sweatshirt as Ronell Mitchell. He has a warrant for his arrest in Kitsap County for first-degree robbery with bail set at $150,000 once he is caught.

Snohomish County Sheriff’s Det. Matthew Barker is also looking for Mitchell. He said Mitchell robbed a Chevron convenience store in unincorporated Lynnwood at gunpoint on Aug. 29. He was wearing the red hoodie that he did during the Kitsap robbery.

Mitchell is known to frequent Snohomish County and has ties to the Tacoma area as well.

Detectives believe this crew has been involved in additional robberies in Kitsap, Snohomish, and King County.

If you have any information on the whereabouts Ronell or if you can identify any of the other three suspects, submit an anonymous tip to Crime Stoppers of Puget Sound through the P3 Tips App on your cell phone or at P3Tips.com. You can also call 1-800-222-TIPS (8477).

Crime Stoppers is offering a cash reward of up to $1,000 for information that leads to the arrest of any of the suspects.

To speak directly with the case investigator, please contact Detective Dave Meyer at DMeyer@co.kitsap.wa.us or (360) 337-5617 or email matthew.barker@snoco.org or message him through the Snohomish County Sheriff’s Facebook page.

Even if you talk to deputies, you must also submit a tip to Crime Stoppers to be eligible for the cash reward. As a non-profit organization, Crime Stoppers of Puget Sound has to have a record of your tip in order to pay out the cash. Find details on how the reward process works at Crimestoppers.com.