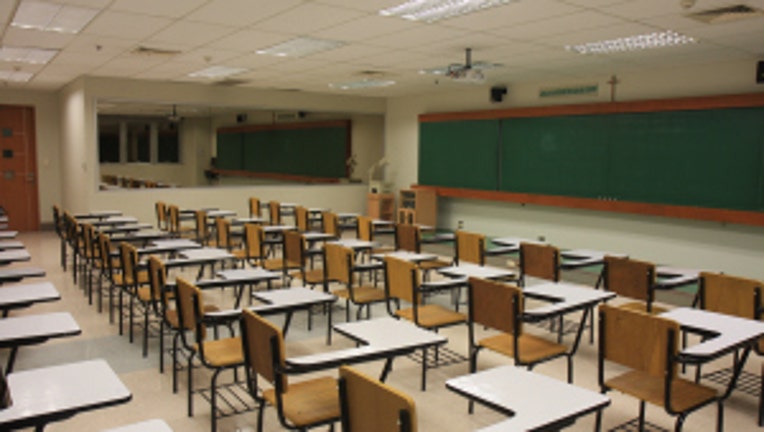 A teacher is now on paid leave, accused of taping a student to a chair, during class.

This happened at Lake Washington High School in Kirkland. Apparently students also got in the act.

A recent incident involving a teacher and tape has been the topic of conversation in the halls.

According to students, a freshman kept getting out of his chair during biology class and the teacher told him to stop.

“He was just kind of messing around and the teacher made a joke, “I'm gonna tape you to your seat,” said one student.

The biology teacher apparently followed through with that threat taping the kid to his chair. Initial reports claim the teacher used duct tape on the teen but students say she used scotch tape on the young man.

Then other students joined in, taping the teen even more and taking pictures with their cell phones.

"My friend said there wasn't anything really overly dramatic. It was a joke,” said student Sheridan.

In a statement sent to Q13 Fox, the district admits the incident happened and is investigating the actions of the teacher and classmates.

The district has a strict policy regarding harassment and bullying and pending the investigation, the teacher could be fired. This isn't the first alleged bullying case involving a teacher.

Last year a Gig Harbor teacher was suspended for holding a child down on the ground during class. On Friday some Lake Washington students were defending their teacher.

“I don't think she did it seriously, it seemed like that would be a little unprofessional,” said student Reaven Johnson. “I like her, I wanted her to be my biology teacher next year.

But Kirkland parents we spoke with say the teacher crossed a big line.

"In this day and age you would think the teachers would know better and if you don't know better, maybe they shouldn't be in a position where they're in charge of kids,” parent John Hay.

A close friend of the student who was taped up says the whole incident is unfortunate.

"I feel kind of bad for the teacher that it got blown out of proportion. I think it was mainly some of the interviews in the class. Some of the kids got riled up about it. Of course the district has to do its job investigating or whatever,” said Ethan.

The teacher isn't the only one facing discipline. Some students are also facing some form of action as well.