SEATTLE -- King County Executive Dow Constantine has asked the Prosecuting Attorney's Office to file a lawsuit challenging the constitutionality of I-976, the $30 car tabs initiative that has passed after gaining a decisive lead in Wednesday afternoon returns.

“The passage of I-976 underscores the ongoing need for comprehensive state tax reform, but in the short term we must clean up another mess that Tim Eyman has created for our state, our region, and our economy. There will be many discussions in the weeks and months ahead to determine how to overcome the loss of safety and mobility caused by this irresponsible initiative, but the impact of I-976 to transportation is – in a word – devastating,” Constantine said in a news release on the county's website.

Sponsored by Eyman, the measure would cap most taxes paid through annual vehicle registration at $30 and largely revoke the authority of state and local governments to add new taxes and fees without voter approval.

The measure would also repeal taxes and fees that were already in place, which could cost the state and local governments more than $4 billion in revenue over the next six years, according to the state Office of Financial Management.

"We don't trust you, and so you better regain our trust, and regaining our trust probably starts with, maybe you shouldn't sue the voters that just said yes to the initiative," Eyman said Tuesday after the first round of vote tallies showed likely passage of I-976. "Maybe you should accept the policy prescription that the voters just voted for."

Initiative 976 was being approved by a 56 percent to 44 percent margin after the first votes were tallied in the all mail election. King County, the state's most populous, was rejecting I-976 but most other counties were approving it by healthy margins.

More than 60 cities use car-tab fees to pay for road construction, bus service and sidewalks. 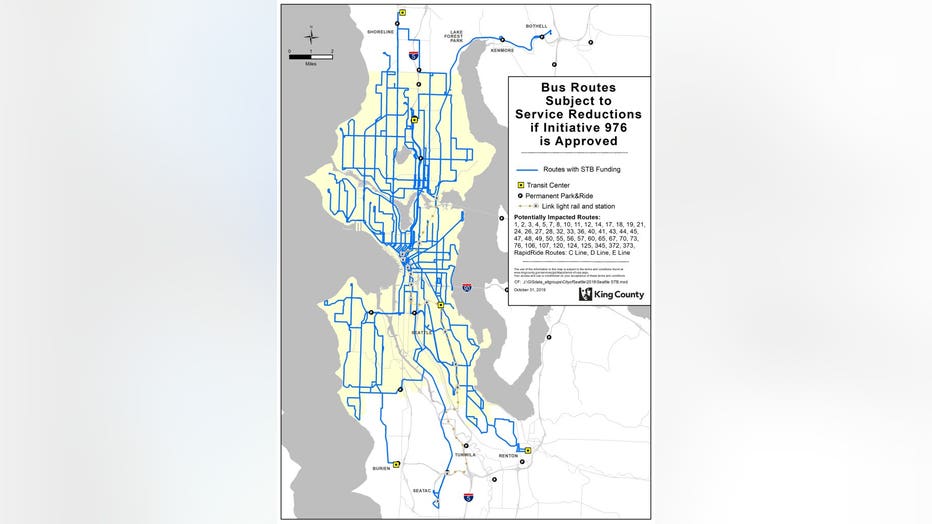 Vote counting will continue for days.