According to the county, the ‘Wildfire Risk Reduction Strategy’ is a set of 12 recommendations to improve wildfire preparedness, response and recovery.

Data from the Department of Natural Resources reports more than 350,000 people in King County live in areas at greater risk for wildfire danger, which the county calls the ‘wildland-urban interface.’

"As climate change increases the odds of a devastating wildfire occurring on our side of the Cascades, we are taking immediate action to better protect people, homes, and infrastructure," said Constantine. "Our experts and partners have delivered a solid set of recommendations that will strengthen our region’s wildfire resilience, response, and recovery."

The catch is that this strategy is simply advice for homeowners; there is no money involved.

"We have all this kindling around us," said homeowner Sue Warner-Murray, "we live in this beautiful environment, and anything we can do to keep it safe—I'm all for it."

FOX 13 previously visited the Mirrormont neighborhood near Issaquah one year ago. We spoke with another homeowner, Linda Shepard, who got tips from King County's forestry expert on keeping her home "firewise."

Today, she showed off the work she's done to protect her home from fires to Constantine.

What she and her fellow neighbors have been doing set the foundation for what King County's risk reduction strategy is all about.

"As King County experiences hotter, drier summers as the result of climate change, there is a great potential for devastation in communities like this one," said Constantine. 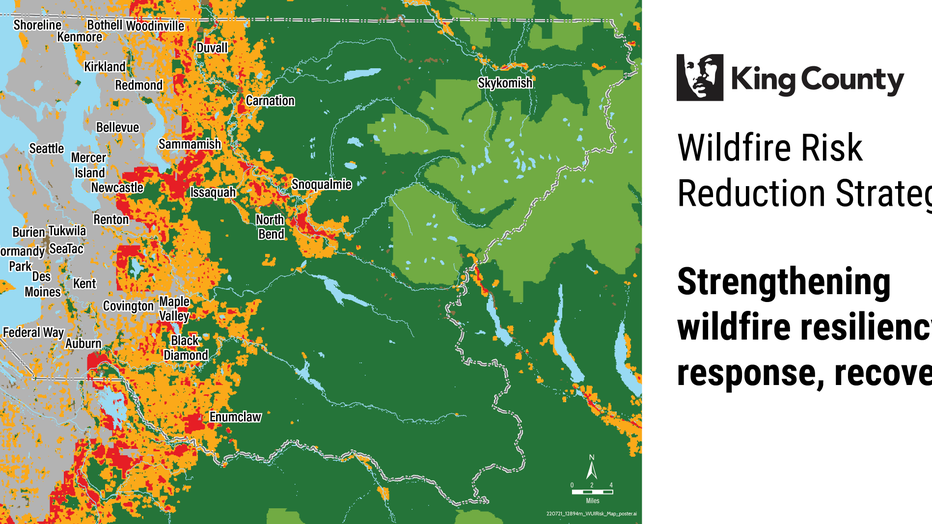 County officials say the conditions have become more favorable for wildfires in Western Washington—but many communities were not designed with such risks in mind, unlike in Central or Eastern Washington where they have traditionally been more common.

Recommended actions put forward by the strategy include:

The strategy consists of recommended actions for small forest owners, of which there are 26,000 in the county, and homeowners—and what they can do to protect themselves and their possessions from fires. But, none of it will be required.

"So I think it really needs to be clear on what homeowners can do," said homeowner Samantha Zistatsis.

Samantha and her family lost their home and everything in it to a fire 32 years ago. She still lives among the trees, and says the county needs to be clear on its priorities.

"It's not a simple as, ‘Trim back so many feet from your house,’" Zistatsis explained, "there's conflicting regulations with the critical areas' ordinance in King County."

She says the ordinance overlaps with the firewise strategy and can be confusing for homeowners.

"You have a house that's right next to a creek, and so you are not supposed to trim, but you need to trim to protect your house and so it gets to: who wins here?" said Zistatsis.

Cost is always a factor for any firewise improvement. FOX 13 asked Constantine if the county will pay homeowners for these improvements.

"There's assistance to homeowners, so we are paying for the expertise," said Constantine, "I do not know if we are also going to be paying to actually subsidize the work, actually, to be done on the private property."

Constantine plans to ask the lawmakers next year for money to help pay for elements of this firewise strategy, possibly including financial assistance to homeowners and small forest owners.

Coordinating an easy-to-understand evacuation strategy is something homeowners told county leaders today they want to see. Officials say it will be part of this new plan.

The Department of Natural Resources estimates 85% of wildfires are started by people, and as a region’s population grows, the chances for wildfires grow.

You can learn more about the Wildfire Risk Reduction Strategy on the King County website.