October is Domestic Violence Awareness Month. The Spotlight shows you a dangerous domestic violence offender who is on the run, and giving you the tools and legal information to protect yourself and your family.

Detectives say that on Sept. 13, McDaniel punched a woman multiple times in the face, then hit her two-year-old child sitting in a stroller leaving the toddler with a black eye. According to court documents, two independent witnesses saw McDaniel "smack" the child who was sitting in the stroller, knocking it over and causing it to fall to the ground with another 11-month-old child inside, fracturing his skull.

One witness told deputies that McDaniel hit the woman with a closed fist "like a grown man," before punching her three to four times in the throat, chest and face.

Detectives are especially concerned due to threats McDaniel has allegedly made to kill the woman.

"We want to get him locked up," said Sgt. Corbett Ford with the King County Sheriff’s Office. "We believe that he is going to be somewhere down in south King County or the North Pierce County area."

Crime Stoppers of Puget Sound is offering cash reward of up to $1,000 for any information that leads to his arrest. Tipsters can remain anonymous when calling 1-800-222-TIPS (8477) or by texting the information through the P3 Tips app on your cell phone.

Martin says the goal of Domestic Violence Awareness Month is to try to prevent it from happening in the first place. In King County, it's easier than ever to apply for a protection order. Simply point your smartphone camera at this QR code: 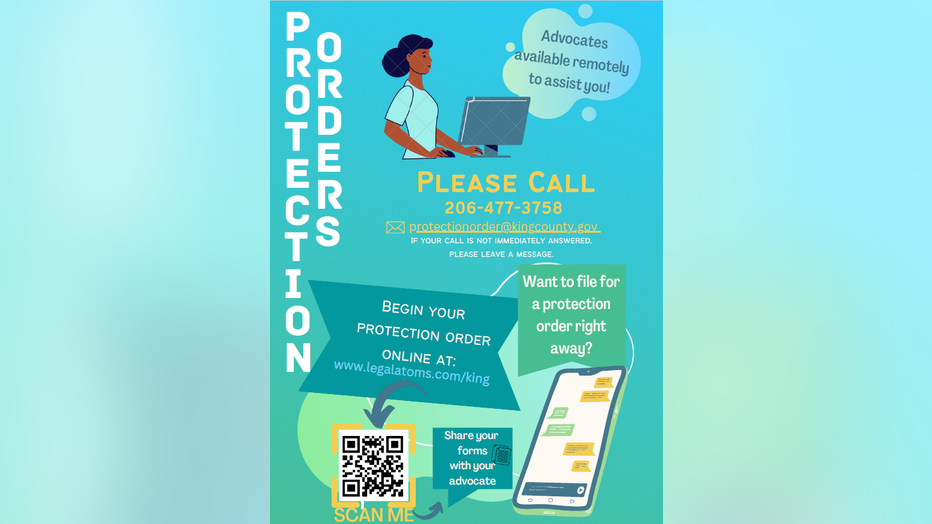 "You can go online any time of day and start to fill out your protection order if you don't want to call 911 or talk to the police. Just point your smartphone at the QR code. We have advocates who are available online to assist people with these orders if they want it, so the order process is much better than it used to be, much more streamlined, and it's all done remotely compared to years past," said Martin.

Martin says a study by the University of Washington showed that protection orders do work.

"I think sometimes people see terrible cases that happened in the media and those stories are real, but for thousands of people, it makes them safer. It does work and it is effective, and the good part is the courts and the police and others in King County take these orders very seriously," said Martin.

DV cases made up 23% of all the charges filed in King County in the first half of September. "The domestic violence unit files more cases than any other unit at the prosecutor's office," said Martin.

"Those that know somebody that's experiencing domestic violence, I think it's important to extend a hand. Reach out to them," said Sgt. Ford.