FOX 13 reporter Dan Griffin is at Pacific Beach, where onlookers have gathered to high ground to watch the waves. The coast is under a tsunami advisory due to a volcanic eruption in Tonga.

SEATTLE - King County said they earlier sent out a tsunami advisory emergency alert on Saturday "out of an abundance of caution."

People in the King County received an alert on their phones warning of a ‘tsunami advisory’ related to the volcanic eruption near Tonga, which prompted advisories all along the West Coast as they braced for big waves. 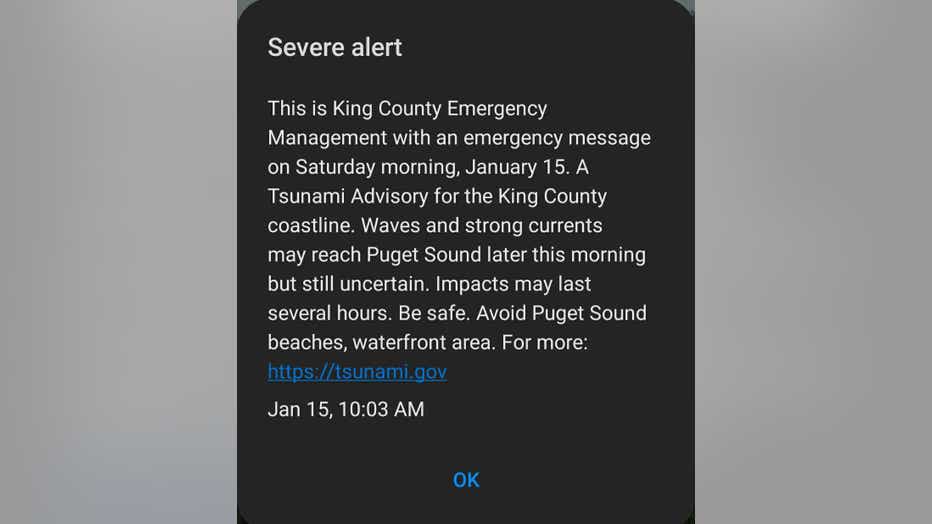 Those waves were not likely to pass into Puget Sound, but officials in King County opted to be safe and issue an advisory, anyway.

The main takeaway from the state’s tsunami advisory was to get people away from the shore, and officials even reported tsunami waves hitting the coastline. Even still, people in areas as exposed as Westport were out on the jetty watching the waves.

As deep into Puget Sounds as Edmonds, parks and areas near the water were closed off for safety reasons.

The tsunami advisory remains in effect in King County and statewide, and will be canceled three hours after the highest wave peak recorded.

RELATED: Volcano erupts in Tonga: Tsunami advisory issued for US West Coast, including Washington and Oregon