Grocery workers will get an extra $4 an hour

SEATTLE - The King County Council voted 8-1 on Tuesday to pass an ordinance that would require big grocery store companies to pay employees an extra $4 an hour for hazard pay during the pandemic.

For most of the pandemic, local unions have been fighting for big corporations to give grocery store workers hazard pay.

"They didn’t sign up for this. It's not like they work at Hanford cleaning up radioactive waste. They bag groceries, they put milk in the dairy department, they cut up meat; that’s their job. And they don’t get paid much to begin with," says Tom Geiger, a spokesperson for UFCW 21.

The ordinance will go into effect on March 22.

One of the union’s main arguments: they say grocery chains profits have skyrocketed during COVID, some 100 to 200%. And the employees on the frontlines don’t see a dime of the profit increase, but they're the ones enduring all the risk.

"In a week they may have a thousand different people there exposed to, so even if 1% of those shoppers are COVID positive, that would be 10 people during that week that they might have come in contact with," says Geiger.

Grocery store corporations did pay employees $2 extra an hour for the months of March and April last year but took it away in May. Since then, the union says many local grocery store employees have gone through turmoil and tragedy because of the virus.

"For the last year I have visited with, and thanked the checkers, stockers, butchers and deli workers at the grocery stores I shop. I have seen and heard their fatigue, and also their courage and dedication to their customers," said Councilmember Rod Dembowski, who drafted the legislation. "These extraordinary times call for governments like King County to respond with extraordinary help. I am proud to stand with these frontline workers and ensure that the risks they and their families are taking, and the dedication they are showing, is reflected in our laws, and in their paychecks. Four dollars an hour is a small price to pay to ensure the continued service they are providing to our communities."

"One of our members who works in South King County, she got COVID, her son who also works in a grocery store got COVID, and he passed away. And she is actually going back to work this month," says Geiger.

The hazard pay measure being considered in King County is similar to other hazard pay laws approved in Seattle and Burien.

Randall and her husband both work at a Safeway just outside of Seattle.

"The two parents in our household are exposed to tons and tons of people all the time, and it’s scary, very very scary." 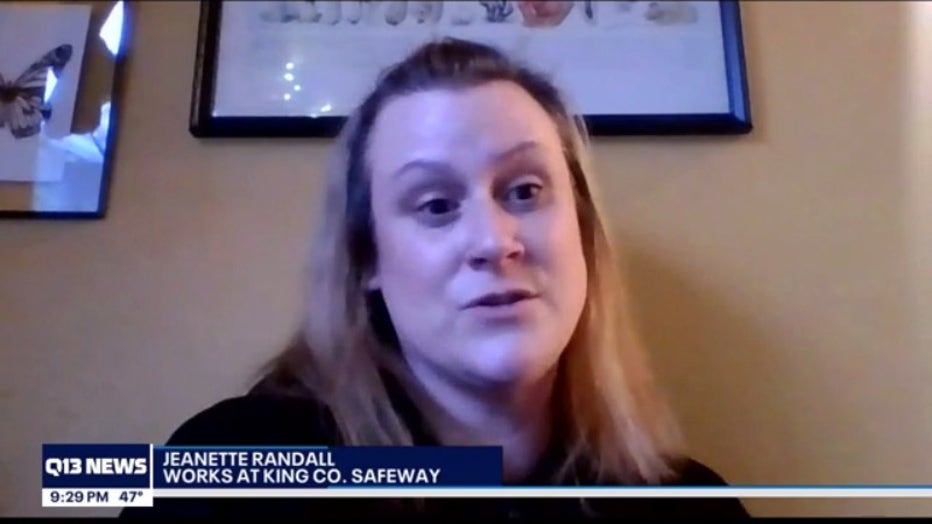 Randall says when she became a grocery store worker 20 years ago, "I definitely did not sign up to work in a pandemic."

She never dreamed of feeling her health would be at risk when she went into work. She certainly never thought she’d ever have to ask customers to wear masks - and sometimes encounter their wrath.

"The ones that are doing it in protest, they’re scary people ... we had a coworker who offered a customer a mask and they had that customer spit in their face."

She says for her and her coworkers, the hazard pay would be more about the acknowledgment of the risks they face daily than the actual money.

"It would give more people that work in grocery stores a sense of pride, and just showing the gratitude."

We’re told while not all members of the county council are in favor of this ordinance, a majority of councilmembers are expected to pass it.

Councilmembers say if passed, the ordinance would last as long as King County is in an official state of emergency due to COVID.