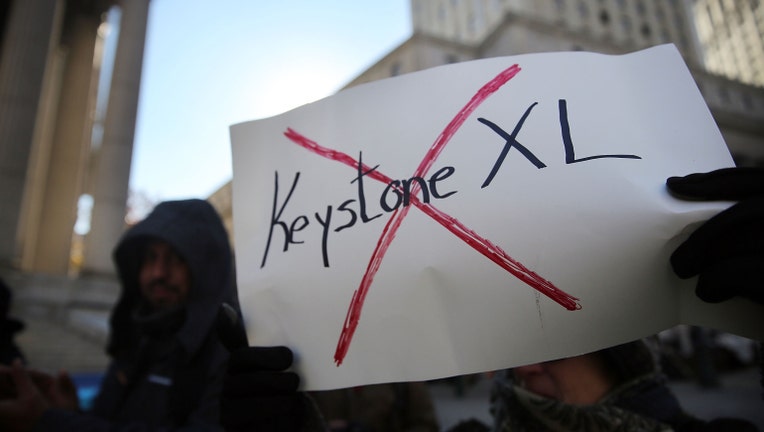 Protesters participate in an anti-Keystone pipeline demonstration in New York's Foley Square on November 18, 2014 in New York City. The Senate is expected to vote November 18, on the controversial pipeline project with 59 supporters, one vote shy of

WASHINGTON (CNN)  -- The Senate blocked a measure Tuesday that would have authorized construction of the Keystone XL pipeline as Democrats chose their pro-environment base over an old friend -- embattled Louisiana Sen. Mary Landrieu.

The vote could just be a speed bump for the Keystone project, with Republicans ready to try again -- with much better odds of success -- once they take control of the Senate in January.

"This will be an early item on the agenda in the next Congress," incoming Senate Majority Leader Mitch McConnell (R-Ky.) said after Tuesday night's vote.

But it's a sharp blow to Landrieu, who had based much of her campaign for re-election in a Dec. 6 runoff on the argument that she could deliver results. For days she had insisted that she had the 60 supporters necessary to cross a key procedural threshold, only to fall one vote shy on Tuesday night.

"This is for Americans, for American jobs, to build an American middle class, and it will create 40,000 immediate jobs," Landrieu said on the Senate floor ahead of the vote. "If the people of this Congress haven't noticed, there's a long unemployment line in some parts of this country."

The vote served as a preview of the confrontations that lie ahead in Washington. President Barack Obama is on track to overhaul immigration rules on his own by the end of the year -- a move that is pushing some conservatives to consider shutting down the government in retaliation.

And as soon as the new Republican Congress is sworn in next year, Keystone will be back on the agenda, along with efforts to curtail Obamacare, raising the prospect of Obama issuing a series of vetoes.

But for all the battles that lie ahead, Tuesday's vote was really about local politics. Louisiana's Senate race is headed for a Dec. 6 runoff election, and Landrieu -- currently the Senate Energy and Natural Resources chairwoman -- saw the pipeline as a final chance to demonstrate her clout to voters in an energy-rich state.

Republicans responded by guaranteeing her opponent, Rep. Bill Cassidy, a seat on the energy committee. The House GOP also had him sponsor their own Keystone authorization bill, which was approved Friday on a 252-161 vote.

Cassidy rubbed salt in Landrieu's wound Tuesday, with his spokesman saying the vote was "perfect snapshot of her time as chair of the Energy Committee -- a failure."

Right now, the decision on whether to approve the Canada-to-Texas pipeline is in the hands of the State Department. Obama has said repeatedly in recent days that he wants Congress to stay out of it and leave it to State to finish its review of -- among other factors -- whether the pipeline would contribute to carbon pollution the could cause climate change.

"There is a process underway and the president is confident that that process will carefully evaluate the consequences of this specific proposal and that that's the proper way for a decision like this to be made," White House Press Secretary Josh Earnest said Tuesday.

Six years into that review, though, lawmakers have grown impatient.

Liberal Senate Democrats like California's Barbara Boxer railed against the pipeline Tuesday, arguing that the environmental harm it could cause far outweighs the potential economic gains.

Boxer pointed to potential health risks of laying the pipeline, including heart disease, increased hospitalization, and a higher prevalence of chemicals that "penetrate deeply into the lungs."

Boxer also referred to the project as the "Keystone Extra Lethal Pipeline."

The Keystone debate on Tuesday pitted traditional Democratic allies against each other.

Many of the Democratic no votes were longtime friends and supporters of Landrieu who had contributed tens of thousands to her campaign.

Sens. Dianne Feinstein (D-Calif.), Chris Coons (D-Del.) and Amy Klobuchar (D-Minn.) all contributed $7,000 or more to her campaign, and all opposed passage of the bill.

In the lead-up to Tuesday night's vote, the big question was whether Landrieu could find the 60 supporters necessary to clear a key procedural threshold.

That left her one vote short -- and her options looked limited. West Virginia Democratic Sen. Jay Rockefeller said Monday night that he was a no vote. Maine Sen. Angus King, an independent who caucuses with the Democrats, said Tuesday that he wouldn't support it.

"Congress is not -- nor should it be -- in the business of legislating the approval or disapproval of a construction project," King said in a statement.