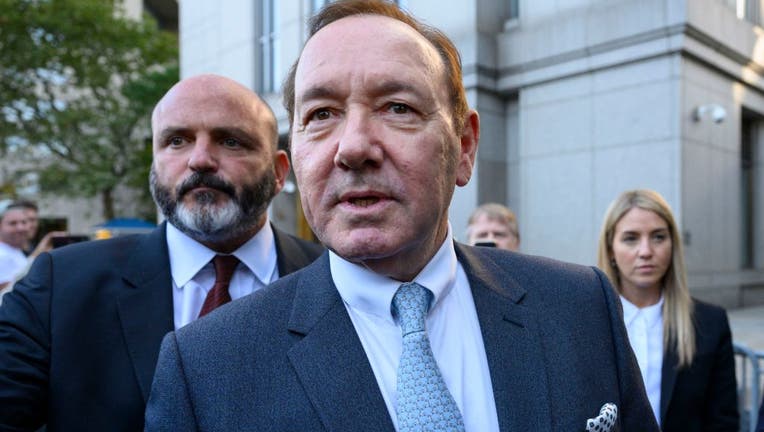 NEW YORK (AP) - The first witness at a civil trial in which Kevin Spacey is accused of making a sexual advance on a 14-year-old boy in the mid-1980s testified Friday that Spacey made a similar move on him years earlier.

Andrew Holtzman was called to testify by lawyers for actor Anthony Rapp, who is seeking $40 million in damages for the psychological injuries he says he sustained as a result of an encounter with Spacey after a party in 1986.

Rapp, 50, began testifying Friday, but the jury was sent to lunch after several minutes in which Rapp provided biographical information about himself. Rapp's claims, first made publicly in 2017, were the first among others that largely shut down Spacey's career after multiple claims of inappropriate touching or sexual advances.

At the time, Spacey was starring in Netflix's political thriller "House of Cards." He's also known for his role in the 1999 film "American Beauty," which won him an Academy Award.

As a teenager, Rapp acted in films including "Adventures in Babysitting." He was later part of the original Broadway cast of "Rent," and is now a regular on "Star Trek: Discovery" on television.

During opening statements Thursday, Rapp's lawyers told the Manhattan federal court jury that they will prove that Spacey picked up Rapp, placed him on a bed in his apartment and climbed on top of him before Rapp wriggled away and fled the apartment. At the time, Spacey was 26.

Holtzman, now 68, testified that he was working in his office at the New York Shakespeare Festival in the summer of 1981 when Spacey entered and sat at a spare desk used by actors and others who worked for the company of seven theaters.

Holtzman said Spacey didn't say anything when he entered the office in a windbreaker, "tight blue jeans," and carrying a leather shoulder bag, but he recalled knowing him because he'd seen his picture in the program for a play, "Henry IV," in which Spacey was performing at the time.

As he finished a telephone call, Holtzman stood up at his desk and a sexually aroused Spacey walked over to him, lifted him up by the crotch and put him on the desk, Holtzman recalled.

"What are you doing? Get off of me!" he said he told Spacey.

"I could feel his erection on my body," Holtzman said.

After a few more minutes, Spacey got off him, grabbed his windbreaker and bag and stormed from the office, Holtzman said.

On cross examination, a lawyer for Spacey, 63, showed Holtzman six pages of a program for "Henry IV" and Holtzman said he did not see Spacey's photograph.