House fails to elect speaker for 3rd day in a row

The House adjourned for a third day without a speaker as Republicans' clash over Kevin McCarthy drags on.

WASHINGTON - For a long and frustrating third day, divided Republicans kept the speaker’s chair of the U.S. House empty Thursday, as party leader Kevin McCarthy failed again and again in an excruciating string of ballots to win enough GOP votes to seize the chamber’s gavel.

Long after darkness, glimmers of a deal with far-right holdouts were emerging. But the day's tally was dismal: McCarthy lost seventh, eighth and then historic ninth, 10th and 11th rounds of voting, surpassing the number of 100 years ago in the last drawn-out fight to choose a speaker. By nightfall, despite raucous protests from Democrats, Republicans voted to adjourn and return Friday to try again.

The California Republican soaked up the moment without visible concern: "Apparently, I like to make history."

The contours of an agreement with holdouts from the conservative Freedom Caucus began to take shape, including several of the key rules changes they have been seeking for months. Those changes would shrink the power of the speaker’s office and give rank-and-file lawmakers more influence in drafting legislation.

The House adjourned on Jan. 4, 2023 after it failed for a sixth time to elect a speaker — continuing a feud between House Minority Leader Kevin McCarthy, R-Calif., and 20 opponents within his own party. The chamber first adjourned until 8 p.m. ET on Jan. 4, following unsuccessful negotiation efforts from McCarthy to secure a majority of votes needed to win the speaker's gavel. After gaveling in at 8:00 p.m., the majority of lawmakers voted immediately to reconvene on Jan. 5, 2023 at noon. Now, the House will have to conduct a seventh round of votes.

At the core is the reinstatement of a House rule that would allow a single lawmaker to make a motion to "vacate the chair," essentially calling a vote to oust the speaker — a move McCarthy had resisted because it had been held over the head of past Republican Speaker John Boehner, chasing him to early retirement.

Even if McCarthy is able to secure the votes he needs, he will emerge as a weakened speaker, having given away some powers and constantly under a threat of being voted out by his detractors. But he would also be potentially emboldened as a survivor of one of the more brutal fights for the gavel in U.S. history.

Other wins for the holdouts include provisions in the proposed deal to expand the number of seats available on the House Rules Committee, to mandate 72 hours for bills to be posted before votes and to promise to try for a constitutional amendment that would impose federal limits on the number of terms a person could serve in the House and Senate.

The chairman of the chamber's Freedom Caucus, Scott Perry of Pennsylvania, appeared receptive, tweeting the adage from Ronald Reagan, "Trust but verify."

Lest hopes get ahead of reality, conservative holdout Ralph Norman of South Carolina said, "This is round one."

"We’ve got some progress going on," McCarthy said, brushing back questions about the lengthy, messy process. "It’s not how you start, it’s how you finish." 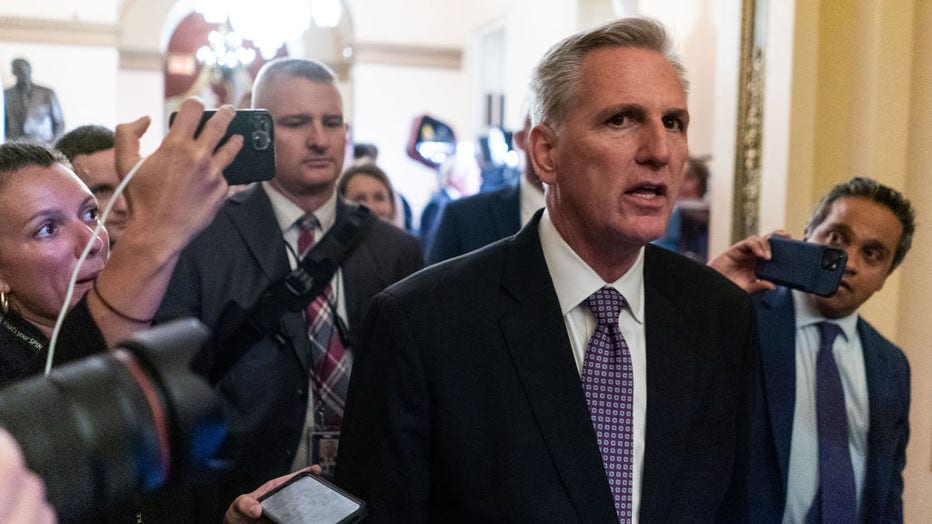 Rep. Kevin McCarthy (R-CA) is surrounded by reporters as he walks to the House Chamber of the U.S. Capitol Building on Jan. 4, 2023, in Washington, D.C. (Kent Nishimura / Los Angeles Times via Getty Images)

With McCarthy's supporters and foes locked in stalemate, the House cannot fully open for the new session, essentially at a standstill, unable to swear in elected members and conduct official business. And feelings of boredom, desperation and annoyance seemed increasingly evident on Thursday.

One McCarthy critic, Rep. Matt Gaetz of Florida, cast votes for Donald Trump — a symbolic but pointed sign of the broad divisions over the Republican Party's future. Then he went further, moving the day from protest toward the absurd in formally nominating the former president to be House speaker on the 11th ballot. Trump got one vote, from Gaetz, drawing laughter.

As night fell before the second anniversary of the Jan. 6, 2021, attack on the Capitol by Trump supporters trying to overturn Joe Biden's election, Democrats said it was time to get serious. The divisive speaker’s fight only underscored the fragility of American democracy exposed by that assault.

"This sacred House of Representatives needs a leader," said Democrat Joe Neguse of Colorado, nominating his own party's leader, Hakeem Jeffries, as speaker.

House Democrats have chosen Hakeem Jeffries to replace Nancy Pelosi in leadership. LiveNOW from FOX's Josh Breslow spoke with Dr. Darryl Paulson at the University of South Florida to break down the party's future.

McCarthy could be seen talking, one on one, in whispered and animated conversations in the House chamber. His emissaries sidled up to holdouts, and grueling negotiations proceeded in the GOP whip's office down the hall. Through defeat after defeat, McCarthy remained determined to persuade Republicans to end the paralyzing debate that has blighted his new GOP majority.

What started as a political novelty, the first time since 1923 a nominee had not won the gavel on the first vote, has devolved into a bitter Republican Party feud and deepening potential crisis.

Democrat Jeffries of New York won the most votes on every ballot but also remained short of a majority. McCarthy ran second, gaining no ground.

Pressure has grown with each passing day for McCarthy to somehow find the votes he needs or step aside. The incoming Republican chairmen of the House's Foreign Affairs, Armed Services and Intelligence committees all said national security was at risk.

"The Biden administration is going unchecked and there is no oversight of the White House," Republicans Michael McCaul, Mike Rogers and Mike Turner wrote in a joint statement. "We cannot let personal politics place the safety and security of the United States at risk."

But McCarthy's right-flank detractors, led by the Freedom Caucus and aligned with Trump, appeared emboldened — even though the former president publicly backed McCarthy.

Donalds, who is Black, is seen as an emerging party leader and a GOP counterpoint to the Democratic leader, Jeffries, who is the first Black leader of a major political party in the U.S. Congress and is on track himself to become speaker some day.

Another Black Republican, newly elected John James, nominated McCarthy on the seventh ballot as nominators became a roll call of the GOP’s rising stars. For the 10th it was newly elected Juan Ciscomani of Arizona, an immigrant from Mexico whose speech drew chants of "USA! USA!"

A new generation of conservative Republicans, many aligned with Trump’s Make America Great Again agenda, want to upend business as usual in Washington and are committed to stopping McCarthy’s rise without concessions to their priorities.

But those opposing McCarthy do not all have the same complaints, and he may never be able to win over some of them.

The disorganized start to the new Congress pointed to difficulties ahead with Republicans now in control of the House, much the way that some past Republican speakers, including Boehner, had trouble leading a rebellious right flank. The result: government shutdowns, standoffs and Boehner's early retirement.

The longest fight for the gavel started in late 1855 and dragged on for two months, with 133 ballots, during debates over slavery in the run-up to the Civil War.