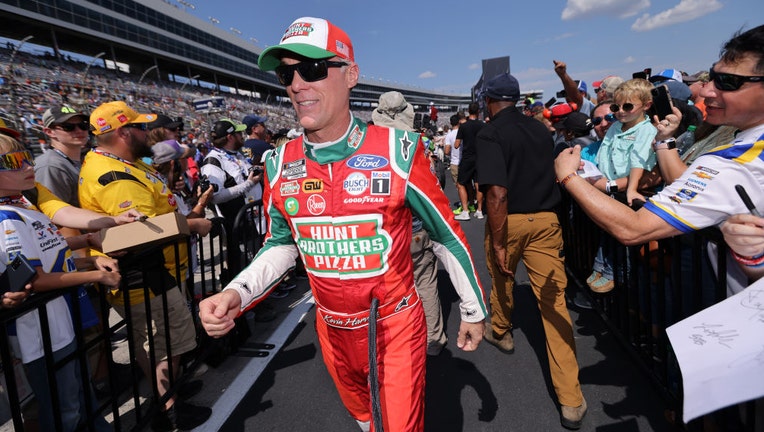 CHARLOTTE, N.C. - Kevin Harvick received the same answer nearly every time he asked another athlete how they decided to retire: Harvick would just know it was time.

The driver thrust onto the global stage when he was named Dale Earnhardt's replacement just days after Earnhardt's fatal 2001 crash will make this 23rd season his last in NASCAR. The 2014 Cup champion heads into his final year tied for ninth on NASCAR's all-time wins list with 60 career victories, 13 consecutive playoff appearances and he's one of the final active drivers from the sport's halcyon days.

"From talking to all the people I’ve talked to, it always came down to the same, ‘Oh, you’ll know, you’ll know it is time, you’ll know the right moment,’" Harvick said in an interview with The Associated Press ahead of his Thursday announcement.

"It’s great to be able to go out on your own terms and plan it how you want it to go, but the biggest thing that sticks out to me is my kids. Being home with them and seeing the impact that you have with them when you are home, being able to be part of that daily process and be that father figure, it’s just time."

Harvick at the end of this season will turn his attention to Kevin Harvick Inc., his growing management business, the enjoyable time he’s spent in the television booth, some bucket list racing, and most important, his young racing family.

Harvick and his wife, DeLana, were adamant they would not raise racers but the slow early days of the COVID-19 pandemic gave father and son too much free time and 10-year-old Keelan is now karting on the international level. The young racer spent part of 2022 racing in Italy — sometimes traveling abroad without either parent — and Harvick figures he saw his son race only three times last year.

And then there's Piper, his 5-year-old daughter who now wants Dad's attention when she's in her own go-kart.

"You know, Keelan, he needs that father figure in his life, especially as he goes down the racing route," Harvick told the AP. "And then Piper probably asks to go to the go-kart track more than he does, and having to send her to the track by herself really frustrates me.

"You don't want her not to have the opportunity to learn like he did. She makes twice as many strides in a day while I’m there than she would in a day when I’m not there. So there's just a time when you have to ask yourself ‘What’s the most important thing for me and my time and my family right now?'"

Harvick had already overcome the NASCAR odds of breaking into the Southern-based sport from Bakersfield, California, when Richard Childress Racing said he'd be a Cup rookie alongside seven-time champion Earnhardt in 2002. But when Earnhardt was killed on the final lap of the 2001 season-opening Daytona 500, Harvick's career was upended.

Harvick competed in 69 NASCAR national races that season with a pair of Cup victories and five wins en route to the Busch title. He was busy but grew jaded by all the attention, the endless Earnhardt comparisons, and the pressure of replacing a superstar during a yearlong grieving period that had engulfed NASCAR.

Perhaps that is what made Harvick so tough.

He fought with his rivals often in his early career and was suspended for a Cup race in 2002 for his actions in a Truck Series race at Martinsville Speedway a day earlier. That incident forged a relationship between Harvick and the late Jim Hunter, a NASCAR executive who helped Harvick navigate the politics of the sport.

But he never softened, not even after having children.

After a 2014 playoff race at Texas Motor Speedway in which Harvick was a bystander to a pit road disagreement between Jeff Gordon and Brad Keselowski, Harvick shoved Keselowski into Gordon and Gordon's crew to trigger a melee.

Harvick for days refused to discuss his role in the brawl, only relenting when he finally accepted that son Keelan needed to hear him accept responsibility — even though Harvick had zero remorse.

Harvick doesn’t know if his grittiness developed from those first difficult years after Earnhardt’s death, but acknowledges an internal pressure to do things his own way and carve out his own legacy that really ramped up around 2006. Some of Earnhardt’s sponsors began pulling off the car and Harvick now had to stand on his own and prove his worth.

"We’d gotten through the tough years of transitioning from what Dale liked to what I liked, and through all those battles and conversations, you put your guard up and become a jerk," Harvick told the AP.

"Looking back at it now, you can see that you could have handled things differently, but it was digging my heels in thinking ‘I need to do this my way now’ and that created some tensions. But I wouldn’t trade anything other than Dale’s death because all those things that came in the next five years were part of surviving and being successful and building something and learning what was right and what was wrong."

His approach led to strained relationships, including a period with seven-time NASCAR champion Jimmie Johnson. Both had come to North Carolina from California and both crashed on Hall of Famer Ron Hornaday Jr.’s couch as they struggled to make it in NASCAR.

But as Johnson surged to title after title, and Harvick fought through lean years with RCR, the relationship fractured and Harvick shoved Johnson in the chest following a 2015 playoff race when Johnson tried to speak to him about an on-track incident.

"We’ve had issues, we’ve been great, we’ve had friendship, we’ve been through it all," Johnson told AP. "I think there’s a great deal of respect between both of us. I truly admire his path and what he’s overcome. Coming from the West Coast as the starting point, climbing through the ranks, we lose Dale and he’s thrust into that position... there’s just a lot of layers there and I respect his work ethic and dedication and career."

Harvick, who added a second Busch title in 2006, counts the Daytona 500, Coca-Cola 600, Brickyard 400 and Southern 500 among his crown jewel victories. Harvick also won NASCAR's first race back during the pandemic, held in front of empty grandstands at Darlington Raceway in May 2020, when NASCAR became the first major sport to return to competition.

Harvick told the AP his own handling of the 2013 parting with Richard Childress — in the works for a full year before he moved to Stewart-Haas in 2014 — is the biggest regret of his career and is grateful the relationship is repaired.

He's forged a strong bond at SHR with co-owner Tony Stewart, crew chief Rodney Childers and his entire No. 4 team. Harvick and Childers are currently the longest active driver-crew chief pairing in the Cup Series at 10 years. Among their 37 wins is a pair of victories last season that snapped a 65-race winless streak — the second longest of Harvick's career.

It was Stewart, the three-time Cup champion and Hall of Famer, who encouraged Harvick to make an early announcement about his retirement and enjoy his final year. Stewart shunned all sendoffs and appreciations in his final season, something Harvick told the AP that Stewart now regrets.

Harvick opens the season early next month with the exhibition Clash at the Los Angeles Memorial Coliseum, followed by his final season-opening Daytona 500 on Feb. 19.

"I want Kevin to savor every lap this season, to compete like hell and to take it all in," Stewart said. "He’s made all of us at Stewart-Haas Racing incredibly proud and we want to make his last season his best season."

Harvick said with certainty that he will not compete in the Cup Series after this year but he’s not completely finished racing. In fact, he’s already got plans for the souped up late model he plans to prepare for himself the day that Keelan is old enough to race against his father.

"He’s a cocky 10-year-old right now who thinks he can beat anyone," Harvick told AP. "We’ll see when the time comes."