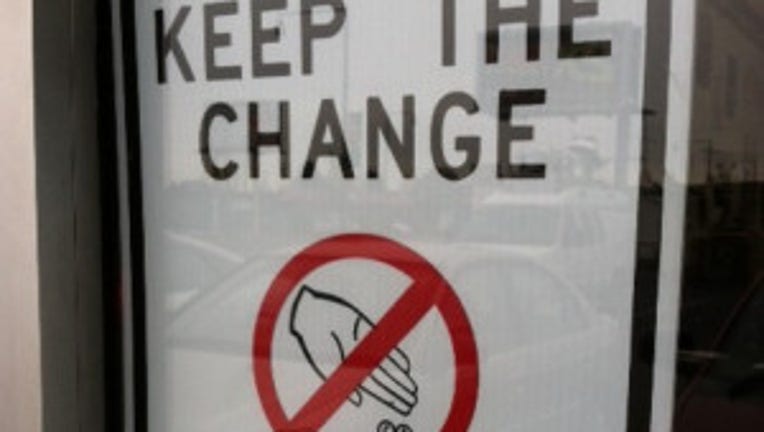 MARYSVILLE- At the HotRod Barbershop in Marsyville, a new sign greets customers on the way in, encouraging them to "Keep the Change" and not give money to panhandlers in town.

“It just got to the point where they were down there on the corners fighting each other," said employee Karen Suppan. "My husband and I saw them literally and it came to blows. They’re owning these streets and they’re making big money.”

Mayor Jon Nehring pitched the ‘Keep the Change’ idea to the owners recently.  At the same time, the Mayor was receiving more and more complaints about aggressive panhandlers.

Instead, Nehring encourages people to donate to charities that help the homeless. In his community that includes the Marysville Community Food Bank and the Damascus Road Church.

“They more and more were going into the parking lot and literally approaching moms as they were getting the kids into the car and their merchandise," Nehring said. "They would turn around to grab their keys and someone is standing there they didn’t know they were there asking for money.”

Now, the campaign has spread to neighboring Arlington where the police chief believes there is a link between panhandling and an increase in heroin use. One hundred window decals have been distributed to businesses and homeowners. But not everyone is happy about the brogram. Vietnam Vet Jim on the corner of 4th Street and the I-5 off-ramp in Marysville.  He said the Keep the Change campaign hurts because he needs the help spare change provides him.

“I come out three days a week or so when I run out of money," Jim said. "I ran out earlier this week.”

Jim adamantly denied using money he receives to by alcohol or drugs. Concerned citizens, such as Georgina Median, said they will continue to give to people like Jim because the money goes directly to those in needs.

“Seeing people like him it really hurts my heart,” said Median  “Today me and my daughter have been in Everett and here and are just going around handing stuff out.”

“We are very compassionate towards those who are truly homeless and in need of help,” Nehring said. “But we want to be very careful that we’re meeting the needs of those who need the help and not subsidizing drug habits.”