Brett Kavanaugh's confirmation to the U.S. Supreme Court has put a spotlight on the dozens of federal cases pitting the Trump administration against Democratic-leaning states, on issues including auto emission standards, immigration and a free-flowing internet.

He lashed out against "left-wing opposition groups" and others during the recent Senate hearing over a high school-era sexual assault allegation, raising questions about whether he can be impartial deciding cases that revolve around Democratic policies or that directly involve Democratic officials.

Kavanaugh already was known as a conservative judge. But his partisan rhetoric created new worries for some who will bring or support cases that eventually could come before the nation's highest court.

"I have even greater concerns about his judicial temperament and his ability to independently weigh cases that may involve the Trump administration," said Oregon Attorney General Ellen Rosenblum, a Democrat who has joined more than a dozen lawsuits against the administration. 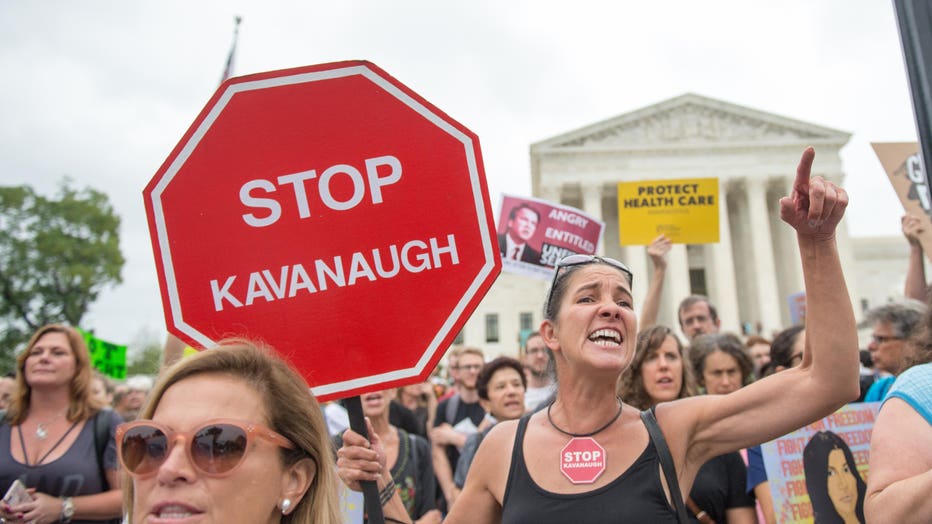 Questions about Kavanaugh's ability to remain impartial and give a fair hearing to such cases escalated after his defiant statement Sept. 27 to the Senate Judiciary Committee.

He railed against the sexual assault accusations as being orchestrated by Democrats, saying: "This whole two-week effort has been a calculated and orchestrated political hit, fueled with apparent pent-up anger about President Trump and the 2016 election, fear that has been unfairly stoked about my judicial record, revenge on behalf of the Clintons and millions of dollars in money from outside left-wing opposition groups."

Kavanaugh, who denied the assault allegation, also said that "in the United States political system of the early 2000s, what goes around comes around" — a statement some observers took to be a threat. But Kavanaugh also said he would not be "swayed by public or political pressure."

Since then, he wrote in a Wall Street Journal op-ed that "an independent and impartial judiciary is essential" and that he will "keep an open mind in every case."

Lawsuits between the states and the Trump administration could test that.

Pat Gallagher, director of the legal program at the Sierra Club, said he expects Kavanaugh would oppose environmental regulation regardless of who calls for it — as he has often done as an appeals court judge.

With his confirmation, Gallagher said, "we're going to have to find ways to keep cases away from the Supreme Court."

Despite questions about Kavanaugh's objectivity, many of the lawsuits involving blue states do not align neatly with partisan ideology. The core question is who has the power to regulate in that area — the federal government or the states?

California's newly signed internet neutrality law is a prime example. It prohibits internet service providers from favoring specific websites or online content by cutting access or charging more for some than others. The state adopted the law last month in response to a Federal Communications Commission policy change earlier this year that ended a similar federal requirement.

"The California legislature has enacted an extreme and illegal state law attempting to frustrate federal policy," U.S. Attorney General Jeff Sessions said in a statement announcing a lawsuit against the state.

California has sued — and been sued — multiple times since Trump took office. Its attorney general, Democrat Xavier Becerra, declined to comment, as did several other attorneys general involved in lawsuits against the administration.

Similar questions over state vs. federal authority are in play in the Trump administration challenge of a law that set up California as a "sanctuary state" unwilling to cooperate with federal authorities in certain immigration matters.

"The concern is that partisan ideology came first and then judicial philosophy, rather than the other way around," he said.

The group is involved in legal battles over immigrants brought to the country illegally as children.

Legal experts said it makes sense for blue states to keep pushing back against the administration, in part because not every case will reach the Supreme Court. Lawsuits can delay federal policies or force compromise.

Both happened with the Trump administration's ban on travel to the U.S. from a group of Muslim-majority countries. After lower courts knocked it back and forced delays, the administration modified the policy. A ban is now in effect and has been upheld by the Supreme Court, but it's not as tough as Trump's first version.

Some advocates have suggested that Kavanaugh should step aside on cases involving the administration and those he criticized during his confirmation hearing. Doing so is rare, though.

"Justices don't recuse themselves simply because they've taken ideological or partisan positions in the past that might favor one side or the other," said Anthony Johnstone, a University of Montana law professor and former state solicitor. "Part of what presidents get with their Supreme Court nominations is their views."