KENT, Wash. -- The Kent community is mourning the loss of Kato, an adored K9 that survived a stabbing six years ago and let elementary school students shower him with affection when he visited.

"People always ask cops what their craziest story is," Kent Police said in a Facebook post. "Kato had many."

In 2013, Kato was seriously injured when he was stabbed by a domestic violence suspect in Des Moines. He made a full recovery and was back on the streets within weeks. 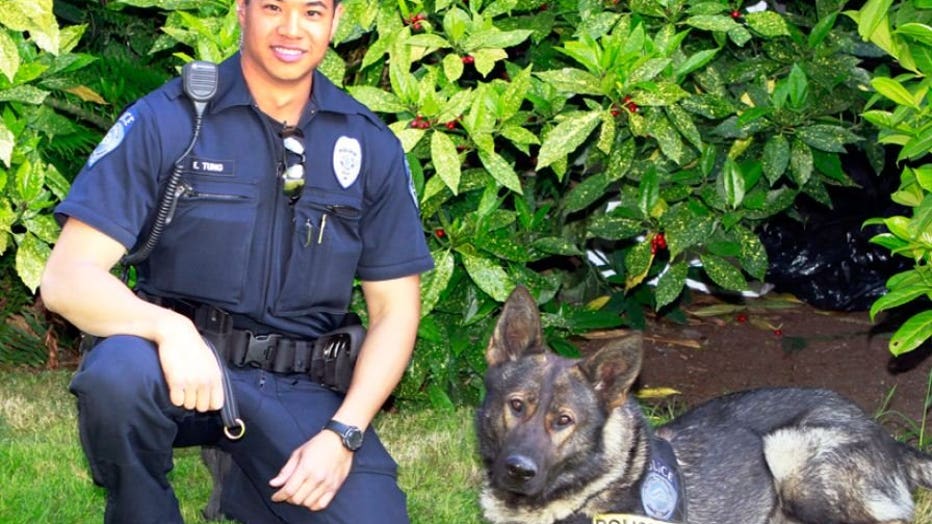 Kato is also credited with locating another suspect who had assaulted police, leading to a "prolific" shootout that was stopped by a propane tank explosion.

"What was a seemingly unrealistic event was dwarfed by how unrealistic Kato's survival was. His handler joked that he had '9 lives.' Many more close calls studded his career," Kent Police said.

Kato also went missing in 2014 and was found using infrared sensors from a helicopter. He was found in a woman's backyard, police said.

But what Kato's colleagues remember most isn't his fine police work: it was his gentle nature and loving temperament.

And he always did those things always with his handler Sgt. Eric Tung. Their bond was so strong, Kent Police Cmdr. Robert Hollis says they had the same personality.

“I feel Kato took after his handler, very happy, enjoyed coming out and doing the work,” Hollis said.

Hollis says at first retirement was not easy.

Hollis says Sgt. Tung and his family kept Kato distracted and eventually Kato started to fully enjoy retirement life with a newborn in the house and Tung’s other dog.

“They were able to bond really well together. A lot of his time was spent running around chasing balls doing fun things,” Hollis said.

It feels like they lost a family member, but they are proud they gave Kato a good life while he was here. Sgt. Tung is a part of a non-profit that raises funds for retired K9’s.

It's called the Valley Retired Police Dog Association and they are always in need of donations. Those funds will go to things like health care costs and food for retired police dogs in South King County.