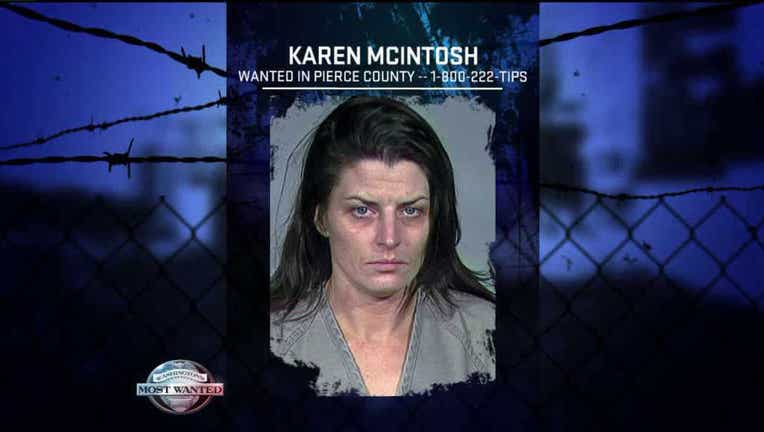 FUGITIVE CAPTURED Jan. 10, 2013 -- Crime Stoppers of Tacoma/Pierce County says Karen McIntosh is in custody, after turning herself into the Pierce County Courthouse on Thursday afternoon. FUGITIVE WANTED IN PIERCE CO. Dec. 21, 2013 -- She's got 22 felony convictions for everything from forgery and identity theft to bail jumping. Now, Karen Lee McIntosh is wanted in Pierce County after detectives say she helped disguise an accused killer. In early September, Dean Barker's body was found dumped outside a vacant house on 124th Avenue East in Graham. His hands were bound and he'd been beaten and strangled. Detectives arrested multiple suspects, including Jeffrey Powell – and that's where they say Karen McIntosh comes into the picture -- accused of rendering criminal assistance by cutting and dyeing Powell's hair to hide his identity. McIntosh was arrested in October, then released from jail. Now, she's on the loose. This is a brutal homicide, Pierce County detective Ed Troyer said. “A lot of people are involved. If you were involved in the actual killing, transporting the body, or covering up -- we're looking for you. We've charged a lot of people and we're looking at her as being part of this. She knows she's being looked for and she's on the run, so we're going to need somebody's help -- a good tip -- to get her caught,” he said. Karen McIntosh has dark brown hair and blue eyes. If you know where she is, call an anonymous tip into: CRIME STOPPERS: 1-800-222-TIPS You must call the Crime Stoppers hotline with your tip to be eligible to receive a cash reward for information leading to a fugitive’s arrest. CLICK HERE for information on how to TEXT A TIP to Crime Stoppers