FORT SCOTT, Kan. - Residents in a small southeast Kansas town fell to their knees in prayer after a lightning strike caused a fire that severely damaged the community’s 150-year-old church.

"Prayer saved our church … and prayer is going to give us the strength and the graces that we need to build it back," St. Mary’s Catholic School Principal Josh Regan said in a message to parents following the devastating fire Monday evening in Fort Scott.

The town is about 95 miles south of Kansas City, Kansas.

HOW TO WATCH THE ARTEMIS 1 LAUNCH

Smoke and flames broke out about 9:15 p.m. at Mary Queen of Angels Catholic Church, also serving as a school for kindergarteners through fifth graders. Multiple agencies from surrounding communities battled the blaze until the early morning hours. 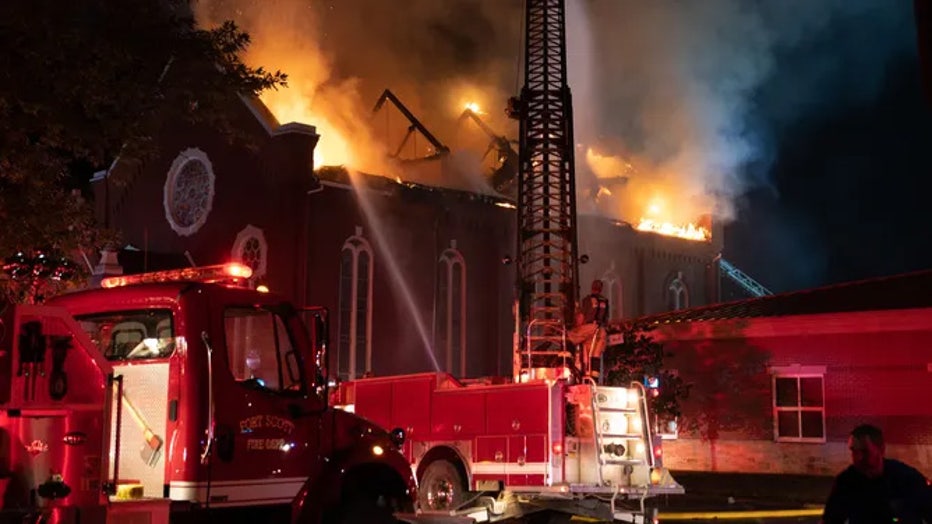 "Our hearts and prayers go out to the parishioners of St. Mary’s Church and the members of our community who have been affected by this tragedy," Fort Scott Fire Chief Dave Bruner said.

As firefighters worked to extinguish the flames, parishioners gathered, seeking a miracle that crews could save as much of the church as possible.

"I know so many people at home were praying, and not just in our own parish," Regan said. "I know people of other faith communities in Fort Scott were praying for us. And that’s so much appreciated." 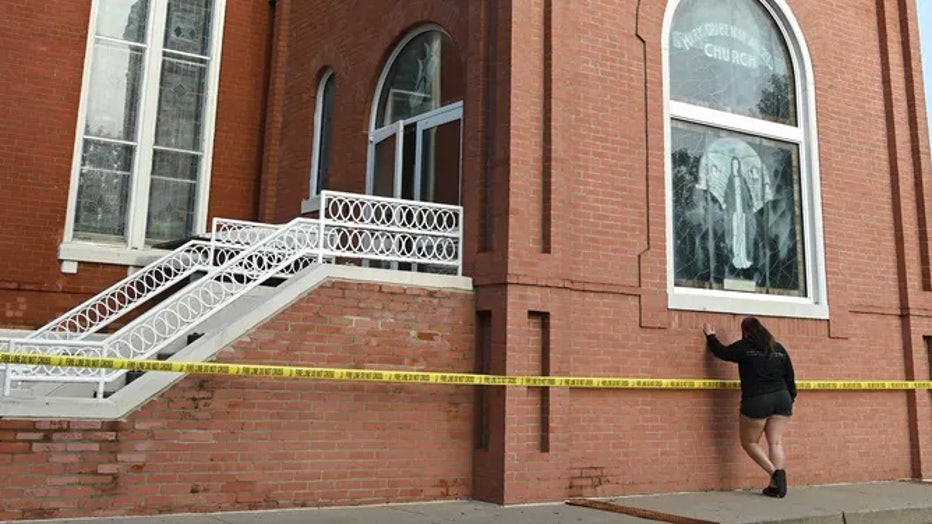 Fort Scott photographer Kenny Felt was among the crowd of over 500 people who watched the church burn. He was able to document the fire and damage.

"This isn’t my church but it’s the church to many people I love which means it’s important to me and Fort Scott," he said. "I can’t speak to what will come later. I can tell you those of you who prayed that pieces of the church could be saved, your prayers were heard." 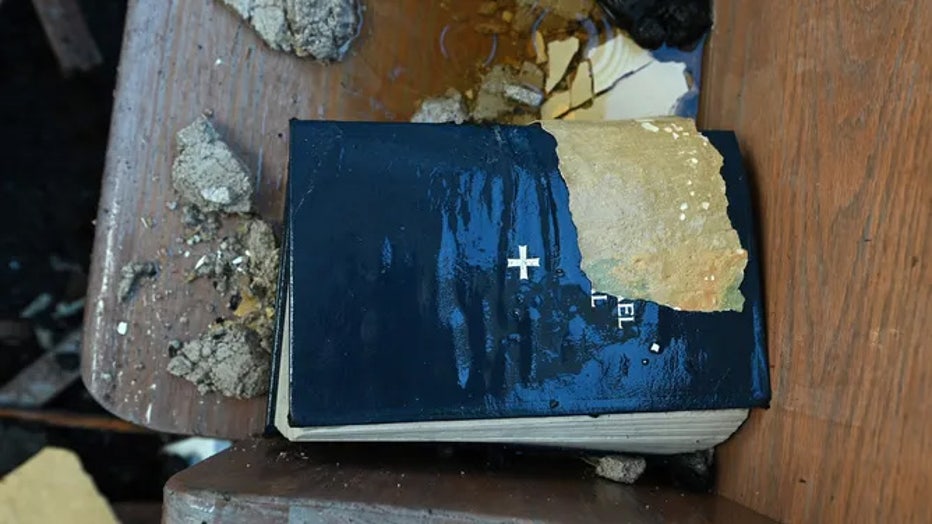 When Felt walked into the church Tuesday morning he said he was in utter disbelief it was still standing with seemingly-untouched items that survived the fire.

"When I walked into the church … I looked up and saw a statue of Jesus with a large and heavy piece of wood laying on his shoulder - perhaps a message from Him saying ‘Put your burdens on my shoulders. I got this!’" he said.

While the destruction was extensive, church leaders feel they will be able to rebuild. However, school administrators had to cancel classes on Tuesday for safety reasons as they developed a plan to return to the building. 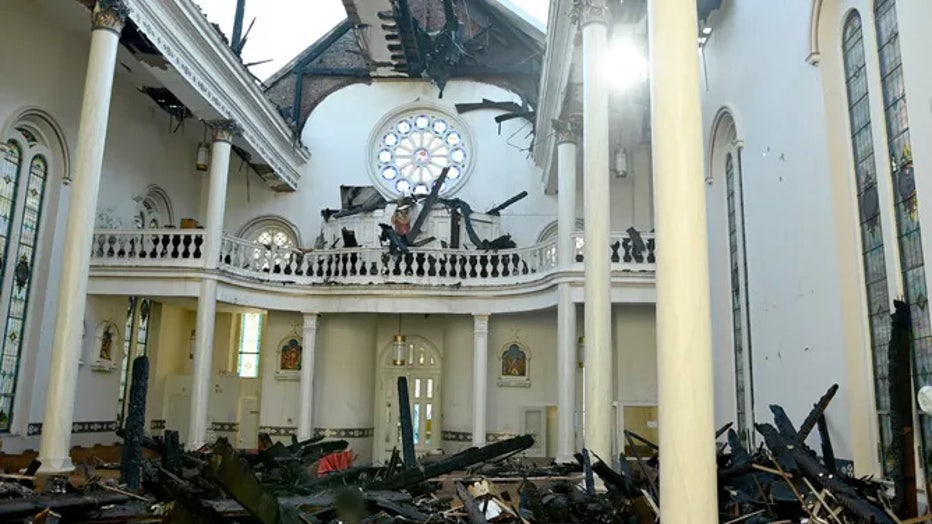 While the destruction was extensive, church leaders feel they will be able to rebuild. (Kenny Felt Photography)

"I will say, we’ll be back in school one way or another very soon," Regan added. "Our main priority is safety, but also getting our kids back in school and getting them back to a sense of normalcy."

One firefighter sustained a minor injury in the fire. 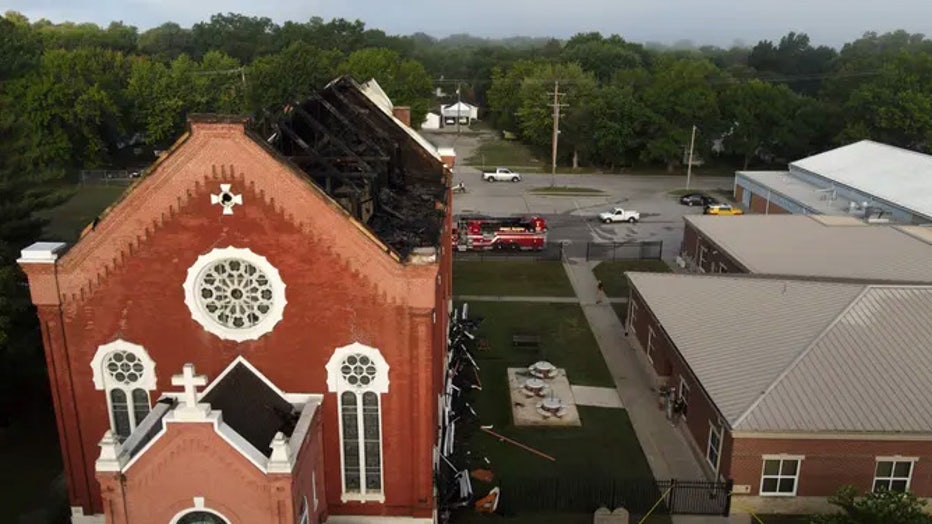 "The world is this is not heaven, right?" Regan said. "So things like this happen, and it’s just trials and tribulations. But we will overcome this."