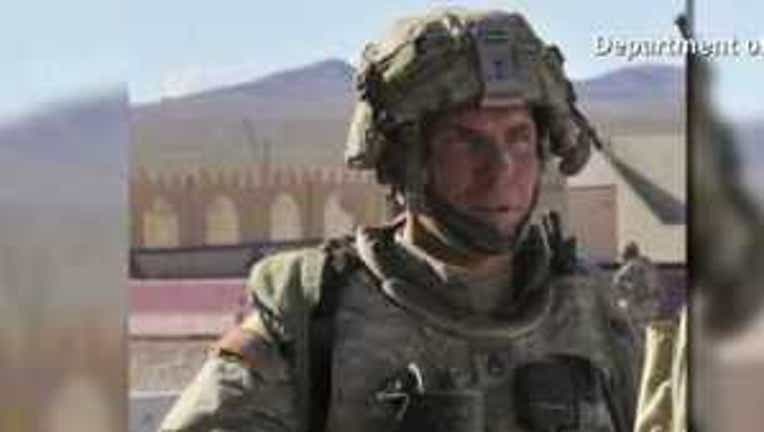 JOINT BASE LEWIS-MCCHORD —
Looking gravely across a courtroom in Afghanistan, 7-year-old Zardana raised her hand Saturday and swore to testify truthfully about the night a man who prosecutors say was a U.S. soldier shot her in the head, shot her brother in the leg and killed her grandmother.

“Yes I do, and I’m not going to lie,” said Zardana, wearing a lavender headscarf and fiddling with a juice box as her image was beamed by video to another courtroom in Washington state, where U.S. Army Staff Sgt. Robert Bales is charged with 16 counts of murder.

Alternately grave and smiling while sitting at the long witness table next to an interpreter, Zardana was asked to testify only about the color of the T-shirt her attacker was wearing during the predawn attack March 11 in the village of Alkozai.

“He was wearing pants like this color,” Zardana said, pointing to the interpreter’s khaki shirt, “and also a T-shirt like you’re wearing,” nodding toward defense lawyer John Henry Browne’s black T-shirt.

Even that brief testimony was an accomplishment: Doctors at a remote U.S. Army post near Kandahar, seeing pieces of brain in her hair after the shootings, had given her up as hopeless. They turned to other, less injured patients. Then when they were finished, they discovered that the little girl was, against all odds, still breathing.

Zardana spent three months in a U.S. Navy hospital in San Diego over the summer. “The first time I saw her, I wasn’t sure she was going to live,” her father, Samiullah, testified Saturday. “The only thing she was doing was opening her eyes.”

But in the U.S., he said, she underwent successful medical treatment. “They tried their best and they helped a lot…. She’s better now.”

Zardana was followed at Saturday's military pretrial hearing by three other young survivors of the shootings: Robina, also 7; Hekmatullah “Khan” Gul, 10; and Rafiullah, who is in his mid-teens.

All three calmly gave detailed accounts of how their relatives were felled by gunfire as Bales, a 39-year-old veteran of four combat deployments, stared at the video screen without expression.

Robina, wearing a deep red scarf and talking animatedly as she folded her fingers together, described how she hid behind her father for protection, only to get hit by a bullet when he was shot.

“My father … was cursing the person as he was coming in the house. Then they shot my father right through the throat and the chest,” she said. “At the same time, the bullet penetrated my body, and hit me in the leg.”

Rafiullah, Zardana’s brother, said the two of them were staying with their grandmother and younger sibling when the gunman entered, a blazing light on his gun, and pointed his pistol at his sister.

His grandmother, Na’ikmarga, “tackled” the gunman as Zardana and Rafiullah bolted next door, he said. Na’ikmarga eventually caught up with the two youngsters, but the gunman followed and shot all three of them, killing Na’ikmarga and several other people who were at the adjoining compound. Rafiullah was hit in the leg.

Most of the children were queried about whether more than one soldier was present during the attacks — a reference to claims by some villagers that at least two, and possibly more, U.S. soldiers were seen on the night of the killings.

Robina insisted she had seen “a lot of lights” outside the family compound. “It almost made it like daylight,” she said. “There were too many lights.”

In an earlier interview with the Los Angeles Times, Hikmatullah Gul, who usually goes by “Khan,” said two U.S. soldiers were in the room where his father, Mohammad Dawud, was killed in front of his family.

“One held my father, and one shot him,” he said in that interview.

On the witness stand Saturday, Khan didn’t repeat that assertion but did say he saw something outside. “There was light outside and there were soldiers,” he said.

Army criminal investigations agent Leona Mansapit testified that Dawud’s wife, Masuma, told her that two U.S. soldiers had entered her home. One led her husband out the door. As she tried to follow, another pushed her back and then grabbed on to her husband.

“The other soldier had a pistol to his head, and pulled the trigger and shot him,” Mansapit said she was told by the widow, who so far has not testified, reportedly because of reluctance on the part of conservative male family members to allow Afghan women to participate in the proceedings.

“She mentioned that she heard other Americans speaking English among themselves, like they were searching other rooms in the compound,” Mansapit added.

Asked by co-defense counsel Emma Scanlan if she had any reason to doubt Dawud’s account, Mansapit said no. “I wasn’t questioning her credibility, or anything like that.

But then Mohammad Dawud’s brother, Mullah Baraan, said he double checked with Masuma shortly before the hearing and concluded that her initial report to investigators that she had seen two U.S. soldiers in the house was “a mistake.”

Such confusion has permeated the proceedings, known as an Article 32 hearing, held to air evidence and determine whether Bales should be held for a court-martial, and whether the death penalty should be considered.

In a recent interview with the Los Angeles Times, Baraan said villagers simply find it hard to believe that Bales could have carried out two separate attacks over a five-hour period without anyone at Camp Belambay being aware of it.

“They say it is only one person. We think this is crazy.… They never go around alone. Never, ever a soldier goes by himself, unless they have a helicopter, they don’t go out … because they are scared,” Baraan said.

He said villagers also will be skeptical of any attempt by Bales’ defense to claim he was mentally incapacitated.

“If someone is crazy, he would shoot the people at the gate. But he passes everybody, and goes to shoot these people he maybe met once before, and shoots them one by one? Why didn’t he shoot the soldiers on the way? Why didn’t he shoot his friends if he was so crazy? This is our question,” he said. “We aren’t stupid. We can count. They want to pin it on a crazy guy.”