Vice President Kamala Harris spoke about the "progress" made amid a "tough" situation at the U.S.-Mexico border during her first trip to the border in El Paso, Texas, Friday.

EL PASO, Texas - Vice President Kamala Harris on Friday used her first trip to the U.S.-Mexico border since taking office to call for an end to political "rhetoric" and "infighting" over immigration, an issue that Republicans have been eager to weaponize against her.

Harris’s trip came after months of criticism from Republicans and some in her own party over her absence and that of President Joe Biden from the border at a time when immigration officers have logged record numbers of encounters with migrants attempting to cross into the U.S.

Her half-day stop — in which she toured a Customs and Border Protection processing center and met with migrant children there, visited an intake center on the border and held a roundtable with local service providers — is unlikely to quell GOP efforts to use immigration as a political cudgel against the administration.

Harris defended both the timing of her visit and the choice of El Paso for the stop. Some critics had said the location is too far removed from the epicenter of border crossings creating a strain on federal resources. She told reporters after landing in El Paso that she had said in March that she would come to the border and it was "not a new plan." 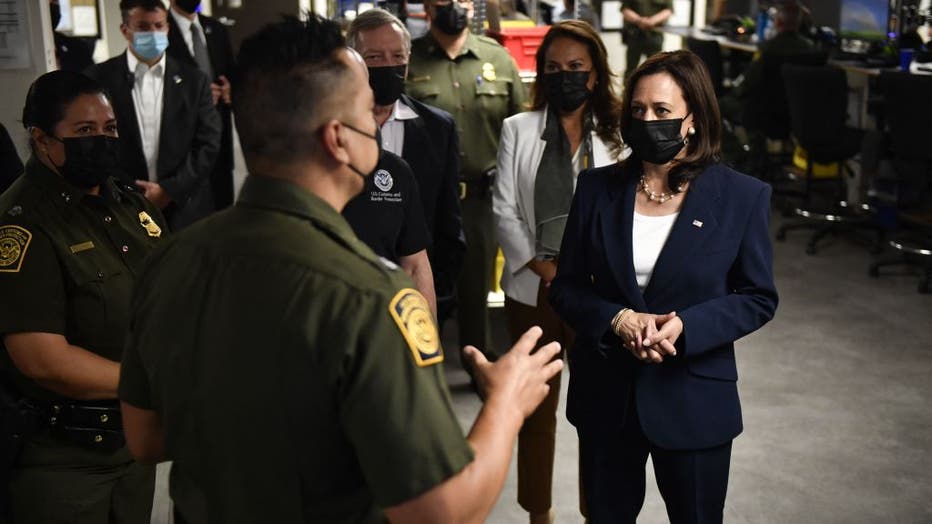 And she said the choice of El Paso was meant to underscore a shift to a more humane approach to immigration policy by the Biden administration after the hardline stance of former President Donald Trump.

"It is here in El Paso that the previous administration’s child separation policy was unveiled," she said. She also noted Trump’s "remain in Mexico" policy, which forced asylum seekers to wait on the other side of the border for their claims to be adjudicated.

"We have seen the disaster that resulted from that here in El Paso," she said.

Harris visited the region with Homeland Security Secretary Alejandro Mayorkas, Texas Democratic Rep. Veronica Escobar and Illinois Democratic Sen. Dick Durbin, a prominent Democratic voice on immigration reform. Both Mayorkas and Escobar said they invited Harris specifically to the area, and Mayorkas was quick to emphasize that border security is in his portfolio, not the vice president’s.

But Republicans faulted Harris for a trip that they dismissed as little more than a photo session. Texas Sen. Ted Cruz, a conservative Republican and leading administration critic on immigration, charged that Biden’s policies "opened the floodgates to human smugglers and drug cartels."

Her schedule included a tour of a Customs and Border Protection processing center and talks with advocates from faith-based organizations as well as shelter and legal service providers.

While Cruz said he was glad Harris had visited, "if the vice president came to Texas without a concrete plan to secure our border and is unwilling to reverse her administration’s failed immigration policies that caused the crisis, then her visit is nothing short of a glorified photo-op."

Harris has borne the brunt of attacks from Republicans over immigration since Biden assigned her to lead the administration’s efforts to address the root causes of migration to the U.S. from countries like Mexico, El Salvador and Guatemala. She’s emphasized that her focus is on improving conditions for residents of those countries through economic and humanitarian aid, to encourage them to stay home rather than make the journey to the U.S..

Republicans have tried to paint the administration as indifferent to border security, seeking to revive a potent political weapon against Democrats for the 2022 midterm elections. Trump plans to visit the area less than a week after Harris, and he’s certain to seize on her trip to keep driving the GOP narrative.

Other administration officials have made multiple visits to the border, but the absence of Biden and Harris had left some Democrats worried that damage already has been done. There’s concern that the Biden administration has ceded the border security debate to Republicans.

Kamala Harris on border visit: Want to stop immigration at "root cause"

Vice President Kamala Harris says she will visit the southern border amid the immigration crisis while answering questions from reporters in Mexico City. Harris went on to say she wants stop immigration at the root cause during her visits to Guatemala and Mexico.

"The administration is making Democrats look weak," said Texas Democratic Rep. Henry Cuellar in an interview with The Associated Press. "I’ve heard, from Democrats and Republicans in my area, what the heck is going on with this administration?"

Cuellar’s district spans from south of San Antonio to the U.S.-Mexico border, and last year he won reelection by the slimmest margin of his nearly two-decade-long career. While he says he’s not worried about his own reelection, he adds, "I worry about my colleagues."

Biden’s first few months in office have seen record numbers of migrants attempting to cross the border. U.S. Customs and Border Protection logged more than 180,000 encounters on the Mexican border in May, the most since March 2000. The numbers were boosted by a coronavirus pandemic-related ban on seeking asylum, which encouraged repeated attempts to cross because getting caught carried no legal consequences.

Republicans jumped on those figures to attack Biden and Harris as weak on border security. Administration officials, including Harris, refute the charge. Harris repeatedly sent a message to migrants during her recent visit to Guatemala: "Do not come."

But those comments drew fire from some progressives, most notably New York Rep. Alexandria Ocasio Cortez, who called the message "disappointing."

It was an incident that underscored the political no-win situation for Harris, taking on an intractable problem that’s frustrated past administrations and has been used by both parties to drive wedges and turnout during campaign season. If Biden chooses not to run for a second term, Harris will be seen as the leading contender to replace him, and the immigration issue could become either a chance to showcase her accomplishments or an albatross.

During a meeting with faith-based organizations, as well as shelter and legal service providers, Harris said she and Biden "inherited a tough situation.’"