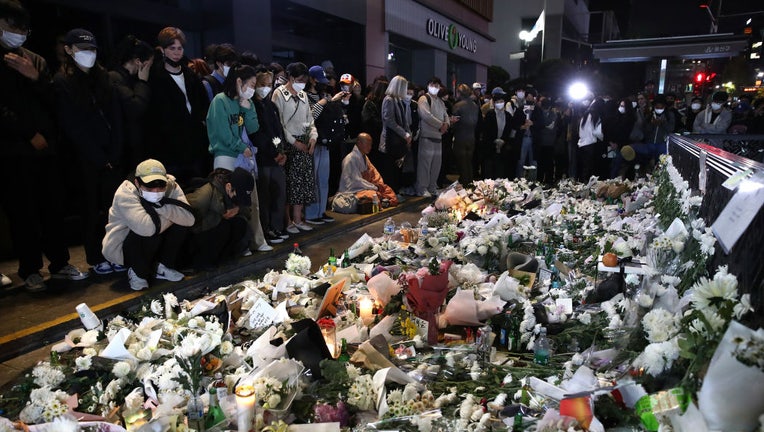 People pay tribute for the victims of the Halloween celebration stampede, on the street near the scene on October 31, 2022 in Seoul, South Korea. (Chung Sung-Jun/Getty Images)

SEOUL, South Korea - Singer-actor Lee Jihan was among the more than 150 victims killed in the crowd surge tragedy Saturday in Seoul, South Korea.

Jihan broke into the Korean entertainment industry as a contestant in the second season of "Produce 101," a Korean singing competition for K-pop hopefuls trying to earn a spot in an 11-member boy band, according to Billboard.

After appearing on the reality show, Jihan transitioned to acting in 2019 and began his career by appearing in the online sitcom "Today Was Another Nam Hyun Day" where he played a high school student who is wild about ramen, the Korean Times reported Monday.

935 Entertainment, one of the agencies that represented Jihan, released a statement on his passing. The statement obtained by the Korean Times read in part "Our beloved actor Lee has left us," the agency said in a release. "He was a kind and warmhearted person. We still remember him smiling to everyone he met, and it is unbelievable that we can't see this anymore."

Deadline reported Monday the young entertainer was reportedly scheduled to appear in the upcoming MBC series "Season of Kkokdu" and had wrapped up filming his scenes in September.

The Associated Press reported Monday that South Korean police are investigating what caused a crowd surge that killed more than 150 people including 26 foreigners during Halloween festivities in Seoul in the country’s worst disaster in years.

Saturday’s disaster was concentrated in a narrow alley in Seoul’s Itaewon neighborhood, a popular nightlife district, with witnesses and survivors recalling a "hell-like" chaos with people falling on each other like dominoes, according to the Associated Press.

The Itaewon area, famous for its cosmopolitan atmosphere, is the country’s hottest spot for Halloween-themed events and parties, which have grown increasingly popular among young South Koreans in recent years. An estimated 100,000 people were gathered there in the country’s largest Halloween celebration since the pandemic began, the Associated Press reported.