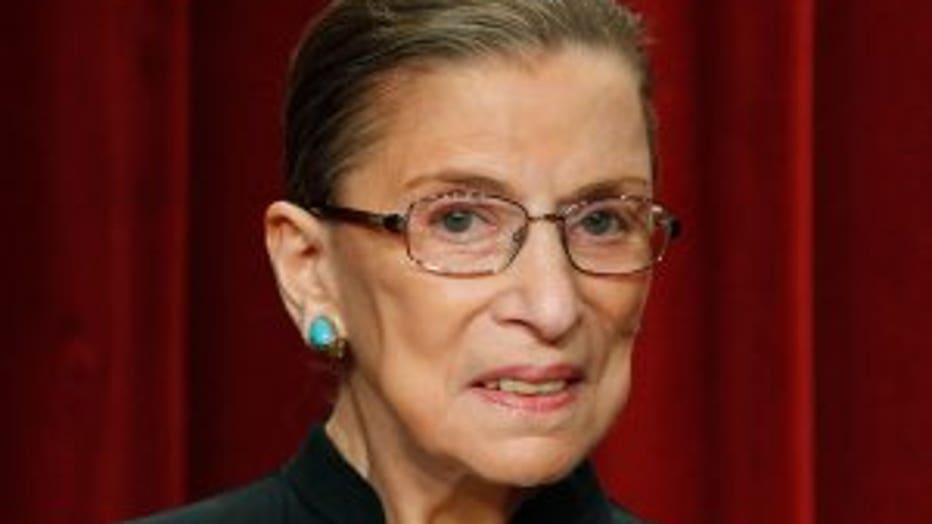 WASHINGTON, D.C. -- Eighty-five-year-old Supreme Court Justice Ruth Bader Ginsburg fractured three ribs in a fall in her office at the court and is in the hospital, the court said Thursday.

She was admitted to the hospital for treatment and observation after tests showed she fractured three ribs.

In her absence, the court went ahead Thursday with a courtroom ceremony welcoming new Justice Brett Kavanaugh, who joined the court last month. President Donald Trump and new acting Attorney General Matthew Whitaker were on hand.

Ginsburg has had a series of health problems. She broke two ribs in a fall in 2012. She has had two prior bouts with cancer and had a stent implanted to open a blocked artery in 2014. She also was hospitalized after a bad reaction to medicine in 2009.

But she has never missed Supreme Court arguments. The court won't hear arguments again until Nov. 26.

Rib fractures are common among older adults, particularly after falls. The severity depends in part on whether the ribs are cracked or broken all the way through, and how many are broken. The extent of Ginsburg's injury was not clear.

A complete break requires making sure the two ends are in alignment, so that a sharp piece of bone doesn't puncture nearby blood vessels or organs. Broken ribs typically heal on their own in six weeks to a month, and patients are advised to limit strenuous activity. But they can be very painful and controlling pain is key. A chief complication is pneumonia, when patients don't breathe deeply enough or cough enough because of the rib pain.

Appointed by President Bill Clinton in 1993, Ginsburg rebuffed suggestions from some liberals that she should step down in the first two years of President Barack Obama's second term, when Democrats also controlled the Senate and would have been likely to confirm her successor.

She already has hired clerks for the term that extends into 2020, indicating she has no plans to retire.