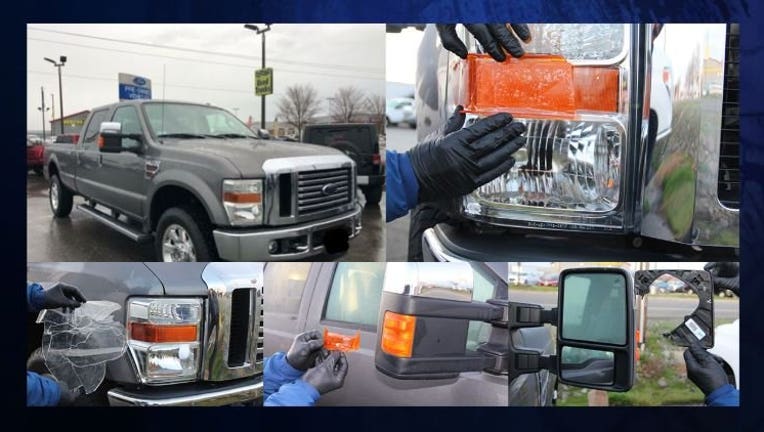 SKAGIT COUNTY -- It’s  a simple request but the answer could be crucial to help the Washington State Patrol solve a deadly hit and run case that has left a family in agony.

Do you know someone who owns a dark-colored 2008 to 2010 Ford Super Duty F-250, F-350 or F-450, like the one above, who was driving in Skagit County last November and showed up in your neighborhood or at your work with a broken headlight, passenger side mirror or possible dents to the front right fender?

Troopers are doing everything they can to find that truck and identify the driver who hit 53-year-old Tonya Pearson-Yoder on the I-5 freeway, at the Bow Hill Rest Area. "She was hit twice. She was left and she was hit by a bigger truck and it destroyed her, so it took our mom,” said Tonya’s daughter, Mandi Walters.

Tonya’s family is consumed with finding that Ford truck and the wretched hit and run driver that just left her to die on a cold November night like she was nothing more than roadkill.

WANTED: Driver who hit woman on freeway, left her to die

Tonya’s family says she had an infectious laugh, especially when she was doting on any of her three grandkids. “They were the light of her life and vice versa. She was the most amazing gramma,” said Tonya’s daughter, Lisa Cummings.

Tonya also had two daughters and a son who describe her as empathetic and a woman who could relate to anyone. “Anyone that did anything bad to her, ‘Well, they have this going on.’ That was her in a nutshell,” said Lisa. 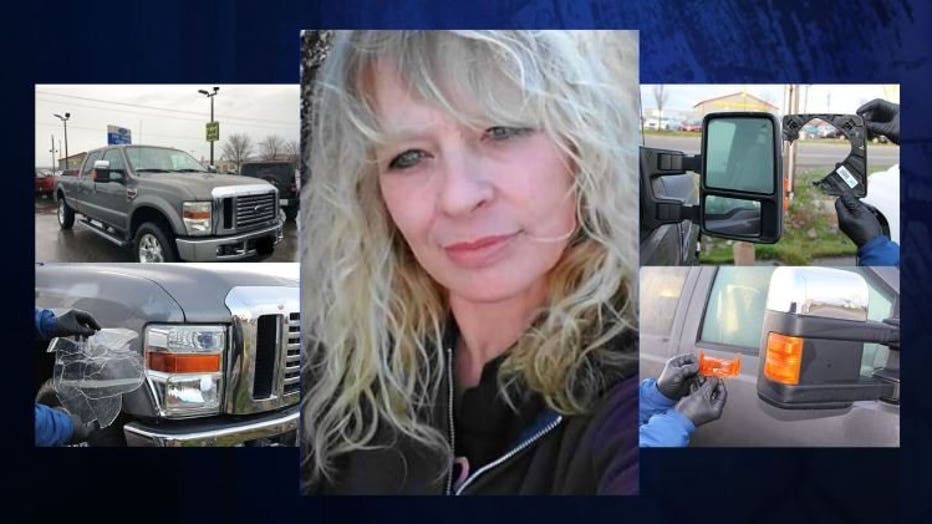 She was also full of spirit. "That woman was so positive and happy. She had more energy than we did. She could keep up with her grandkids better than we could,” said Mandi.

Tonya’s family was the center of her life. She knew there was nothing more important. Her daughters leaned on her to lift them up or calm them down. Now, they are trying to cope with the anguish of losing her. "It's hard when we've had two holidays and a grandkid’s birthday with her in a box instead of here,” said Lisa.

Trooper Heather Axtman with the Washington State Patrol says it’s an absolutely devastating case. She says Tonya parked her truck on the northbound shoulder of I-5, near the Bow Hill Rest area in Skagit County. It was after 1 a.m. on November 20th, 2019. She then walked across the interstate.

So, why would Tonya, who wasn't dressed for the weather that night, risk her life by crossing  I-5 to get to the southbound rest area? The answer is simple. Love. “Her loved one was here in the southbound rest area and she was trying to get to him,” said Trooper Axtman. It was her boyfriend.  "They had a conversation. He tried to get her inside his vehicle. She didn't want to and she ultimately walked out of this rest area,” described Trooper Axtman.

Troopers say they've verified that Tanya's boyfriend drove south of the rest area to a casino to buy her a pack of cigarettes, believing that would convince her to continue their discussion.

“Her boyfriend has been very forthcoming, has talked to our investigators to great length and his story is 100% legit,” said Trooper Axtman. When he returned, Troopers were already shutting down the freeway. Detectives say Tonya had been hit twice trying to cross the interstate. First, by a pickup truck and then by a semi. The semi driver stopped and called 911. The pickup driver kept on going, leaving behind a lot of evidence.

"We have a lighting fixture from the passenger headlight and we have pieces from a passenger side mirror.  What that shows our investigators is that Tonya was standing at the time she was originally hit, by what we believe is a Super Duty F-250, 350 or 450. We don't know if that's a single cab, an extended cab, or a quad cab."

Detectives believe the Ford truck is dark in color and could have damage to the right front fender. They've scoured local body shops and auto dealers looking for the vehicle. “We have no idea that this person is a Washington resident, but what we do know is that the damage is significant enough that they had to fix it. Somebody knows something,” said Trooper Axtman.

“I am angry and I am obsessed. I will absolutely find the avenue for that one lead that brings this person to justice,” professed Tonya’s younger sister, Danyel Davis. "I've always said that Tonya had the purest heart." Tonya was always her protector and Danyel was her defender, now more so than ever as Tonya’s case remains unsolved. “I will not stop. I will never stop until this person has been arrested and I'm sitting at their arraignment,” said Danyel.

But for now, this is a family which cannot heal and couldn't even have an open casket. The funeral director said the trauma was too severe. “He said, ‘I can't tell you no, but you're mom doesn't look like herself and it wouldn't be a good feeling and I wouldn't want that to be my last memory of her. But, I really, really needed to kiss her goodbye, because I loved her,” said Mandi.

This heart-wrenching pain. This unimaginable sorrow. It's not fading. They can't move on, knowing the driver is still out there. Everywhere they go, their heads are on a swivel looking for the Ford Super Duty that hit their mom.

“For this person to be found, or come forward, it would feel like she mattered,” said Mandi. "We want to close this wound for good and put her to rest like she deserves,” said Lisa.

Again, Troopers don't know if the truck is an F-250, F-350 or F-450, but it would have had damage that had to be fixed. If you spot it in your neighborhood, worked on it, or know who drives one that had that kind of damage last November, Crime Stoppers of Puget Sound will pay you a $1,000 cash reward. You will remain anonymous. Submit tips through the P3 Tips App on your cell phone, or call 1-800-222-TIPS. You can also go to www.p3tips.com.