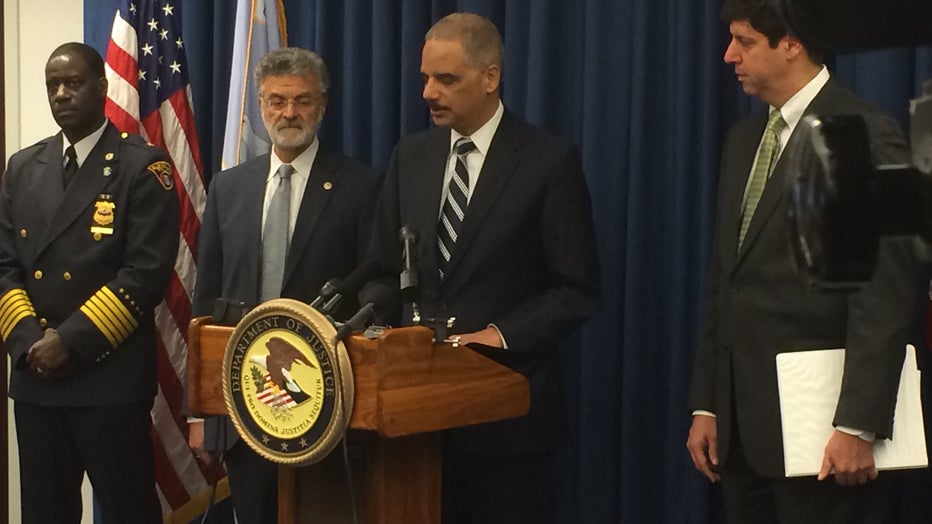 (CNN) -- Cleveland police officers use guns, Tasers, pepper spray and their fists either unnecessarily or in retaliation, while using excessive force on those "who are mentally ill or in crisis," the Justice Department announced Thursday.

As a result of this "pattern ... of unreasonable and unnecessary use of force," the city and Justice Department have signed an agreement "to develop a court-enforceable consent decree that will include a requirement for an independent monitor who will oversee and ensure necessary reforms."

The results of the federal review come as the Cleveland Division of Police is under fire for the November fatal shooting of 12-year-old Tamir Rice. The incident sparked outrage in an era when the Michael Brown shooting and similar situations have put police use of force under a microscope, though Chief Calvin Williams has defended the shooting, saying Rice reached for an air pistol that was "indistinguishable from a real firearm."

According to the investigation's findings, the department's practices erode public confidence in the police, making it difficult and dangerous for the city to deliver police service, the department said.

"Accountability and legitimacy are essential for communities to trust their police departments, and for there to be genuine collaboration between police and the citizens they serve," Attorney General Eric Holder said in a statement.

"Although the issues in Cleveland are complex, and the problems longstanding, we have seen in city after city where we have been engaged that meaningful change is possible. There are real, practical and concrete measures that can be taken to ensure not only that police services are delivered in a constitutional manner, but that promote public safety, officer safety, confidence and collaboration, transparency, and legitimacy."

The Justice Department said it launched its probe in March 2013 after "a number of high profile use of force incidents and requests from the community and local government to investigate the division." Mayor Frank Jackson requested the investigation after a controversial police chase and shooting that killed two people in December 2012.

Not only did the investigation reveal a practice of unreasonable use of force but "in some cases unnecessary force in violation of the Fourth Amendment of the Constitution."

That includes unnecessary shootings and "head strikes with impact weapons," the report says. It also includes "excessive force against persons who are mentally ill or in crisis, including in cases where the officers were called exclusively for a welfare check."

The investigation found that the department employs "poor and dangerous tactics that place officers in situations where avoidable force becomes inevitable."

The Justice Department concluded that Cleveland's officers are not provided "adequate training, policy guidance, support, and supervision. Additionally, systems of review that would identify problems and correct institutional weaknesses and provide individual accountability are seriously deficient."

The department fails to review its officers' use of force, investigate other allegations of misconduct, "respond to patterns of at-risk behavior," enforce appropriate policies and establish "effective community policing strategies," according to the Justice Department.

"Throughout the investigation, the Department of Justice provided its observations and concerns to the city, and in response, the division has begun to implement a number of remedial measures, however, much more work is needed," the department's statement said.

"Together, we can build confidence in the division that will ensure compliance with the Constitution, improve public safety and make the job of delivering police services safer and more effective," Gupta said in the statement.

Attorneys and investigators from the Justice Department's Civil Rights Division's Special Litigation Section and the U.S. Attorney's Office for the Northern District of Ohio reviewed thousands of pages of documents, including training materials, internal reports, video footage and investigative files. They also interviewed "officers, supervisors and command staff, and city officials; and spoke with hundreds of community members and local advocates."