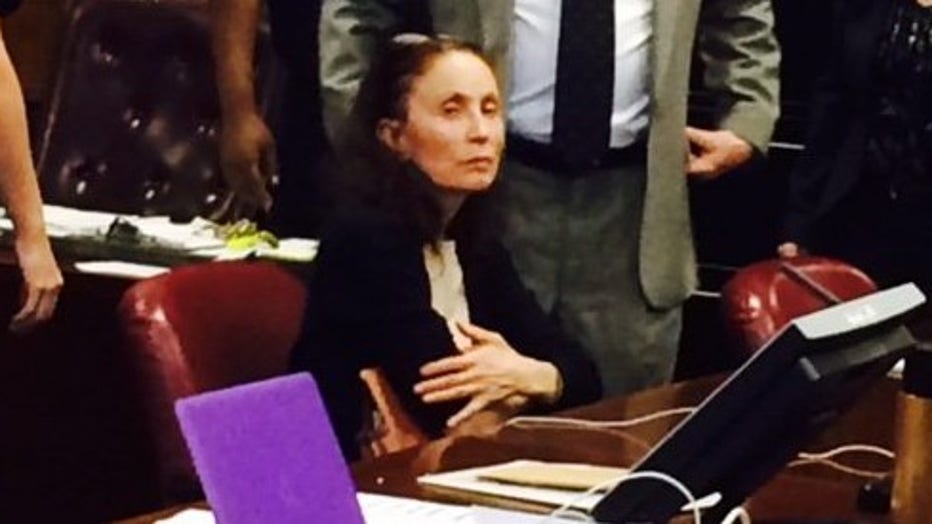 The jury accepted her claim that she acted in a state of "extreme emotional disturbance." Jordan, who has vowed an appeal, faces a 5- to 25-year prison sentence.

"Gigi Jordan showed no mercy to her son, and should receive none at the time of her sentencing," Manhattan District Attorney Cyrus Vance Jr. said in a statement.

Jordan, 53, displayed little emotion as the verdict was announced at the close of a sensational two-month trial in Manhattan, in which prosecutors described in chilling detail how the businesswoman, who made a fortune in pharmaceuticals, forced little Jude Mirra to swallow a cocktail of painkillers and anti-inflammatories in 2010. Prosecutors said she forced many of the drugs down his throat with a syringe.

At her trial, which started on September 10, no one disputed the unthinkable manner in which Jude spent his final hours on February 5, 2010. Police found his cold body after they were dispatched to the luxury Peninsula Hotel in Manhattan. The call to police came after a relative of Jordan's was unable to reach her.

When police arrived at the hotel, they found Jordan sitting next to the bed where her son lay unresponsive, surrounded by pills and pill bottles.

An autopsy found four of the painkillers and anti-inflammatories used to kill the boy still undigested in his stomach. Orange juice and vodka were used to wash down the drugs.

Prosecutor Matt Bogdanos presented expert testimony that showed the boy's injuries were consistent with Jordan climbing on top of Jude and holding open his mouth as she poured the lethal cocktail.

But defense lawyer Allan Brenner painted a portrait of Jordan as a desperate mother ultimately driven to kill Jude by her two former husbands. The defense said one ex-husband had allegedly threatened to kill her, a crime that would have left Jude with her other former husband -- his biological father -- who she believed had sexually abused the boy.

"This was not an act carried out with murderous intent," Brenner told jurors in closing arguments.

The prosecution said there was no evidence Jude was ever sexually abused.

On the stand, Jordan, a former nurse who started a home health care company, portrayed her actions as a mercy killing. Her ex-husband was threatening to kill her, she said.

"You're a dead woman," she claimed he told her.

"I made the decision I was going to end my life and Jude's life," she told the jury, placing her hand over her mouth.

Jordan said the boy was physically and sexually abused not only by his biological father but also by others, including the woman who took Jude to school. She testified that the boy was assaulted by "a good number of people."

The boy's father has denied the allegations and has not been charged, CNN affiliate WCBS has reported.

While on the stand, Jordan at first appeared calm as she described for a jury the last time she saw her son alive. Jude's vocabulary was limited. He typed on a BlackBerry to communicate with her.

"We were typing throughout some period of time. We were saying goodbye to each other," Jordan told the jury and then began to cry.

"At some point, I put the pills together," she recalled. "I gave him the pills."

"Which drugs did you give him more of?" Brenner asked.

"A lot more of the Ambien," she said. "I gave him more Xanax, but the Ambien is the one I gave him the most of. I gave him Hydrocodone, which were large. I was drinking a vodka orange and there was a little left. I broke up the pill and put it into the juice mixed with vodka."

Brenner sought to show that Jordan, believing she was ultimately protecting her son, brought the drugs to the hotel room with the intention of killing them both, but she survived the suicide attempt.

Prosecutors said the killing was premeditated and Jordan expected to survive.

As Jude lay dying, the prosecution said, Jordan sent an email to a financial adviser instructing him to transfer the $125,000 trust she set up for her son to her personal account.

In addition, Jordan transferred $8 million from a savings to a checking account before checking into the hotel with her son.

Jordan told the jury she planned on giving the money to charity before taking her life.