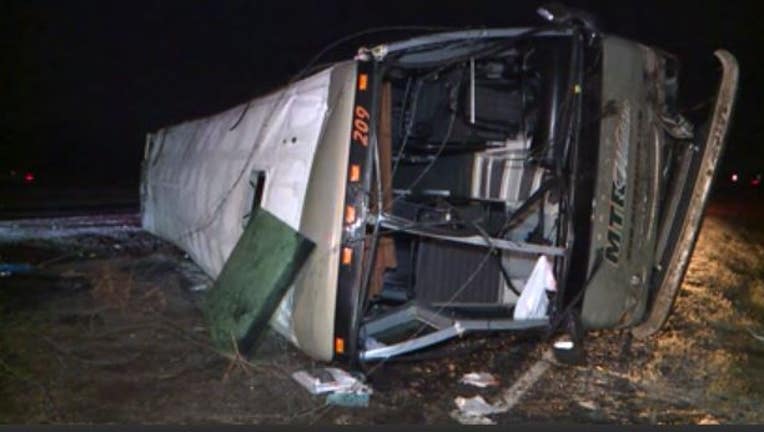 SEATTLE - A jury has awarded over $1.4 million to four University of Washington marching band students injured in a bus crash in 2018 as the group was headed to Pullman to perform at the Apple Cup.

The driver of the bus was going too fast for the icy conditions on Interstate-90, Washington State Patrol said. The bus slid off the interstate and rolled onto its side. There were also no seatbelts on the bus.

Forty-five of the 56 people on board were injured.

A total of $1,482,200 was distributed among the four students that filed a lawsuit against charter bus company MTRWestern.

Alexia Brown received the largest award of the four, with $569,000. She was a freshman alto saxophone player on her first trip to the Apple Cup. Brown was tossed out of the rolling bus and regained consciousness to find herself tangled up in barb wire. She had multiple fractures to her spine and PTSD.

Senior Edith Myers-Power was the section leader for the tenor saxophone players. She suffered an AC joint separation in her shoulder, which required surgery. She was also diagnosed with PTSD. Myers-Power graduated a few months later and never played again for the UW band.

Brown and Myers-Power never marched again or played for the UW band.

Monica Mursch, a saxophone player, broke her clavicle during the roll of the bus. She was diagnosed with post-crash trauma. A junior, she was able to return to marching and playing her senior year.

Jacob Koreen suffered primarily from bruises, lacerations, and PTSD. Koreen was a baritone player. After the crash, he continued to march and play with the band the rest of the year. He told the jury he did it for his friends who couldn’t still march.

"After this long fight for justice, we are pleased the jury agreed this was a horrible crash," said Anthony Marsh of Hermann Law Group. "These four students survived an astounding tragedy. We hope anyone on the bus still fighting for justice will keep fighting until they get what is fair."

The same law firm to represent the four students have also represented victims' families in the Boeing 737 MAX crashes and 'Ride the Ducks' crash victims in Seattle.