President Joe Biden spoke from the White House on Aug. 6, 2021, after the release of the July jobs report showing that hiring surged and the unemployment rate dropped to 5.4%.

WASHINGTON - U.S employers added 943,000 jobs in July and drove the unemployment rate down to 5.4% in another sign the economy is bouncing back with surprising vigor from COVID-19. But there is growing fear the fast-spreading delta variant will set back the recovery.

The worry is that the resurgent virus could discourage people from going out and spending and trigger another round of shutdowns or other restrictions.

"That is a definite downside risk,’’ said Rubeela Farooqi, chief U.S. economist at High Frequency Economics. "The risk is from a more cautious consumer, if they don’t want to engage in outside activities. ... You’re also hearing about big companies that are delaying a return to work. That might be something that slows things down.’’

The Labor Department collected its data for the report in mid-July before the Centers for Disease Control and Prevention last week reversed course and recommended that even vaccinated people resume wearing masks indoors in places where the variant is pushing infections up.

Still, the July numbers looked good. They exceeded economists’ forecast of more than 860,000 new jobs. Encouraged by their prospects, 261,000 Americans returned to the job market in July. And the unemployment rate fell from 5.9% in June. 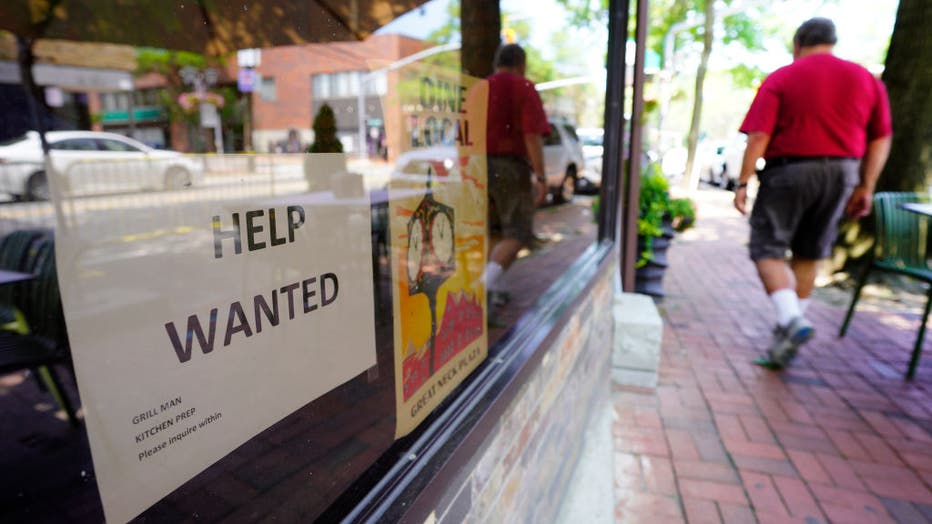 Moreover, the report found that as customers come back and businesses scramble to find workers, they are raising wages: Average hourly earnings were up 4% last month from a year earlier.

The Labor Department also revised its jobs numbers for May and June, adding 119,000 jobs.

The economy lost over 22 million jobs in March and April 2020 in a practically overnight recession as the coronavirus forced businesses to shut down and people to stay home. Since then, the U.S. has recovered nearly 17 million jobs, meaning it is still almost 6 million short.

"If the pace of hiring over the last three months continues, all jobs lost due to the pandemic would be regained in seven months," Leslie Preston, senior economist at TD Economics, wrote in a research report. "However, the pace is likely to cool a bit and the risk of the delta variant looms.’’

The unexpectedly strong numbers come at a critical moment for President Joe Biden’s agenda, with the Senate set to take up a $1 trillion infrastructure bill this weekend before moving on to a more than $3 trillion expansion of the social safety net pushed by the Democrats.

Biden said the jobs report validates his efforts to stabilize the economy and slow the spread of the virus, and he encouraged lawmakers to pass the rest of his agenda.

"The bottom line is this: What we’re doing is working," Biden said, adding, "We’ve got a lot of hard work left to be done."

The U.S. is seeing an average of more than 98,000 new COVID-19 cases per day, up from fewer than 12,000 a day in late June — though still well below the peak of 250,000 reached in January. The vast majority of new cases are among people who have not gotten vaccinated.

Over the past week, a growing number of state and local governments and major employers have made masks and vaccinations mandatory in a move that could help beat back the virus and protect the economy.

A failure to contain the surge could lead to more closings and cancellations of various events and prompt schools to roll back plans to reopen, making it difficult for many parents to go back to work.

"The next 10 to 14 days are going to be critical to try to get it under control,’’ said Labor Secretary Marty Walsh. "We need to get more people vaccinated. Where there are mask mandates in place, we need to follow that."

He added: "It’s really important that we take this seriously so we don’t get into a situation where we have to go into shutting down parts of our country."

Farooqi said she is optimistic the job rebound can continue despite the variant, but she is holding off on her forecast for August because "there are a lot of unknowns right now."

The rollout of vaccines encouraged businesses to reopen and consumers to return to shops, restaurants and bars. Many Americans are also in surprisingly strong financial shape because the lockdowns allowed them to save money and bank relief checks from the government.

As a result, the economy has bounced back with unexpected speed. The International Monetary Fund expects U.S. economic output to grow 7% this year, its fastest pace since 1984. And employers are advertising jobs — a record 9.2 million openings in May — faster than applicants can fill them.

Some businesses blame generous federal unemployment benefits — including an extra $300 a week tacked on to regular state jobless aid — for discouraging Americans from seeking work. In response, many states have dropped the federal assistance even before it is scheduled to expire Sept. 6.

Walmart is offering up to $5 more per hour to many warehouse employees as it tries to retain workers in the tight labor market.

Layne’s Chicken Fingers, an eight-restaurant chain in Frisco, Texas, is raising wages, paying bonuses, offering health insurance and promising young workers the chance for advancement. Two of the four managers of its company-owned outlets are 19, and another just turned 20.

"We’re finding they can handle it -- with a lot of oversight,’’ said CEO Garrett Reid.

The Animal Humane Society near Minneapolis is running flat-out trying to find homes for animals. It has raised wages to $15 an hour for staffers who take care of the cats and dogs and help visitors pick out pets.

Eileen Lay, the organization's chief financial and operating officer, knows what she’s up against.

Associated Press writers Anne D'Innocenzio in New York and Martin Crutsinger and Zeke Miller in Washington contributed to this report.