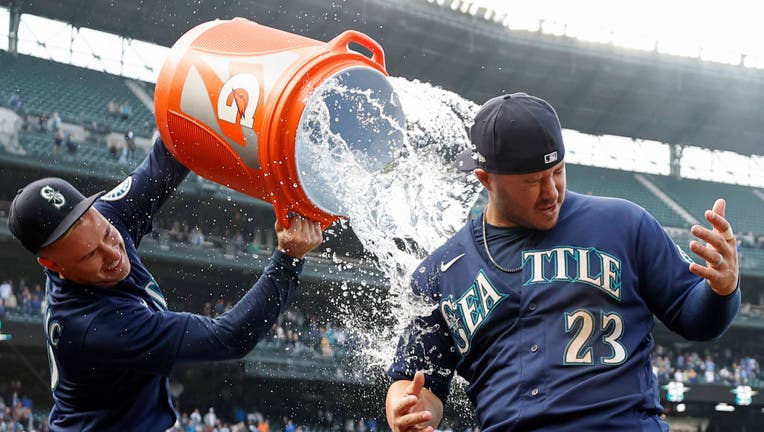 SEATTLE - Julio Rodríguez has shined on every stage during his spectacular rookie season.

The next will be the brightest the 21-year-old has faced to date: the playoffs.

"We deserve being the spot we are. And we are a really good team. I know we are really good team. And we got the stuff to compete against anybody," Rodríguez said. "I’ve been saying that throughout the season. I truly believed in the talent we have here."

Rodríguez put a final exclamation point on his Rookie of the Year candidacy with his 28th home run. Ty France hit a game-ending single and the Seattle Mariners capped the regular season with a 5-4 win over the Detroit Tigers on Wednesday.

Rodríguez set a franchise record with his sixth leadoff homer this season and finished off his rookie campaign hitting .284 with 25 doubles, 75 RBIs and 25 stolen bases.

His home run also topped Alvin Davis — the 1984 AL Rookie of the Year — for most homers by a rookie in Mariners history.

"What else you can say about Julio? He’s a generational type player," Seattle manager Scott Servais said. "And fortunately for us, he’s going to have a Mariners uniform on for a long, long time."

Mitch Haniger added a two-run homer and Luis Torrens — the winning pitcher in the first game of Tuesday’s doubleheader — hit a two-run homer in the sixth inning that gave the Mariners a 4-3 lead.

Seattle won it in the ninth after Gregory Soto (2-11) walked Curt Casali and his throwing error on J.P. Crawford’s grounder moved Casali into scoring position. Jarred Kelenic walked and France chopped a single down the right-field line.

"This whole homestand was really important," France said. "Not only just the clinching aspect, but we wanted to have momentum going into the playoffs."

"There is a lot of fight in this organization. There’s a lot of work to be done," Tigers manager A.J. Hinch said. "You may not hear a ton from us about it in the coming week and coming months but by the time we get back to (spring training) we’re going to be on the right track."

Seattle starter Marco Gonzales wore the brunt of trying to save as much of Seattle’s bullpen as possible for the upcoming matchup with Toronto. Not part of the roster for the wild card series, Gonzales went seven innings and threw 106 pitches, allowing eight hits and struck out five. Riley Greene’s two-out RBI single in the seventh pulled Detroit even and cost Gonzales a chance at his 11th win.

Paul Sewald struck out the side in the eighth and Erik Swanson (3-2) struck out a pair in the ninth.

"That was a huge role for them to put on me and I embraced it," Gonzales said.