TAMPA, Fla. - A Leon County judge on Thursday denied a motion from the state asking the court to dismiss a lawsuit filed by parents, including several in Tampa Bay, that claims Gov. Ron DeSantis' order banning school mask mandates is unconstitutional.

The judge determined parents do have legal standing to sue the governor; they're now asking for an injunction that would allow districts to institute COVID-19 safety measures, including requiring face coverings, without risk of penalty from the state.

A day earlier, Hillsborough County schools became the latest district to pass a mask mandate, requiring them for all students a staff for the next 30 days with the possibility of a medical opt-out.

"I hope that the governor will listen to those questions [discussed by the school board] and know that we're not a political at all as a board. We’re just really trying to fend off anything to mitigate the safety and welfare of our children," Board Chair Lynn Gray said following the meeting. 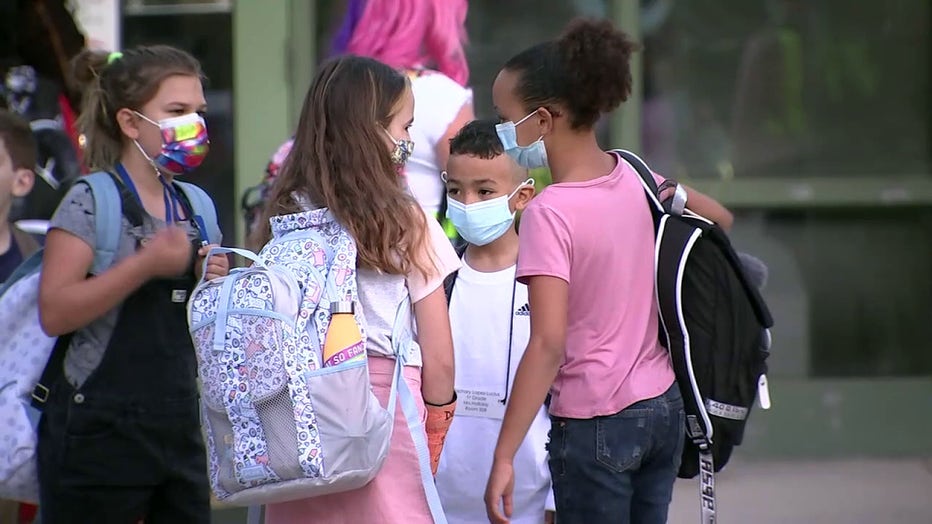 Kids wear masks as they return to school in Hillsborough County in August of 2021.

"There are parents who are sending their kids to school in ways that they thought were the most healthy for their kids, particularly these little kids -- kindergartners, first graders," DeSantis said. "And they basically took that away from the parents. And so my view is that the parents understand what's best for their kids."

The Florida Board of Education heard the cases of the Alachua and Broward County school districts this week and determined they violated the governor's order. It's unclear what penalty the districts might face, although state Board of Education members indicated they may consider removing district leaders from office.

The governor, meanwhile, is now facing pushback from Washington D.C. President Biden ordered the Secretary of Education to take any measures necessary, including potential legal action, to fight governors who are viewed as preventing local school boards from enacting COVID-19 safety measures.

"While about all the world burns and while parts of our country burn, you have this this obsession that a little 5-year-old should not be able to go to school without wearing that mask for eight hours a day," the governor continued. "As a parent, I'm offended that the federal government thinks that they know better than we do as parents."

The lawsuit over the governor's order will go to trial beginning Monday morning.