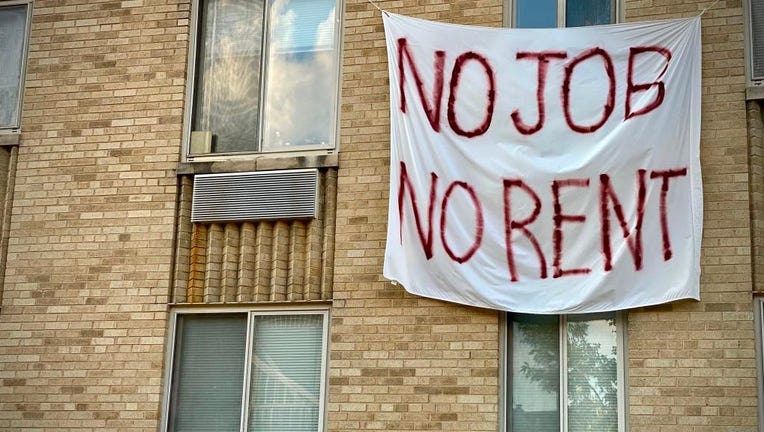 FILE - A banner against renters eviction is displayed on a controlled rent building in Washington, D.C. on Aug. 9, 2020. (ERIC BARADAT/AFP via Getty Images)

SEATTLE - A King County Superior Court judge is considering whether to nullify Seattle laws meant to protect tenants from eviction after the laws were challenged by rental property owners.

Landlords argue Seattle violated their constitutional rights with rental regulations including a new legal defense for tenants who face eviction once the city lifts its current eviction moratorium, The Seattle Times reported.

In court Friday, attorneys for the rental property owners argued that law and two others stripped property owners of their rights to receive timely rent payments and seek legal action when tenants fail to pay.

Defending the laws, city attorneys emphasized that tenants will still owe back rent.

Landlords are "being asked to help share some of the burdens of some difficult situations that our society and our city face, and no one welcomes additional burdens," said attorney Roger Wynne. "But an unwelcome law is not an unconstitutional law."

King County Superior Court Judge Johanna Bender said she would rule within 30 days. The outcome of the case could have a significant effect on evictions as the city emerges from the coronavirus pandemic.

Social services providers are concerned about a potential spike in homelessness among tenants unable to pay their rent once city, state and federal eviction moratoriums expire. It’s not clear yet when the moratoriums will end.