After over five years of investigations and court filings, a shellfish trafficking case brought by the Washington Department of Fish and Wildlife has ended with a judge ruling the court didn’t have jurisdiction to hear the case in the first place

MT. VERNON, Wash. - After over five years of investigations and court filings, a shellfish trafficking case brought by the Washington Department of Fish and Wildlife has ended with a judge ruling the court didn’t have jurisdiction to hear the case in the first place

It’s the second big win for Tulalip fishermen Hazen Shopbell and Anthony Paul. In early 2021, the pair received a $50,000 settlement for a countersuit over a false arrest claim stemming from the case.

WDFW began their investigation into Shopbell, Paul, and their company Puget Sound Seafood Distributors back in 2016. The lead investigator believed the pair were illegally trafficking shellfish, selling clams off-reservation without proper documentation.

Days before the trial was set to begin, a flurry of court filings changed the case and the arguments of the state, including where the alleged crimes had taken place. At issue: Did the actions being prosecuted happen on tribal land, or inside Washington?

On Monday, Judge Brian Stiles determined that the state’s case did not belong in a Skagit County courtroom, telling lawyers as he dismissed the case.

"My decision is consistent with the heart of the Treaty of Rafeedie Consent Decree, preserving Treaty Rights that were gained many years ago. This court shouldn’t be involved in those issues," Stiles ruled. 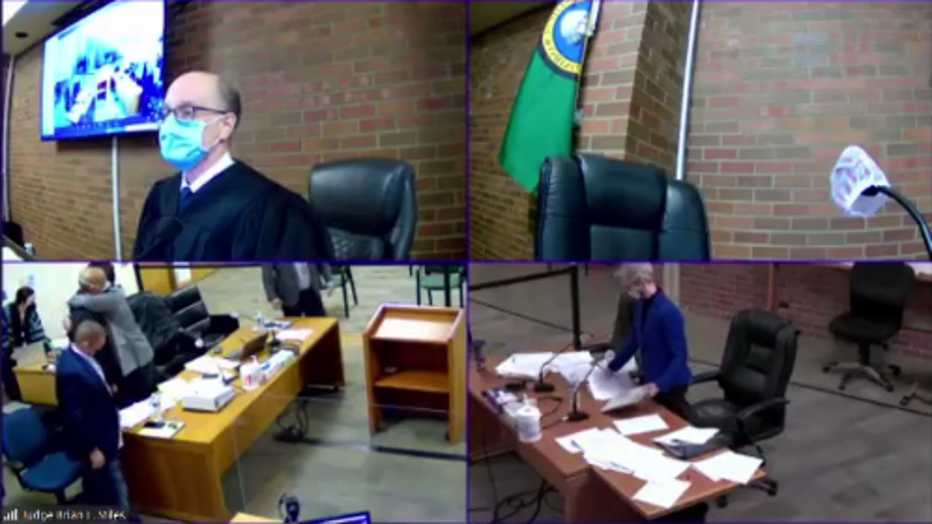 Defendants Shopbell and Paul hug their lawyers following a ruling by the judge that tossed out five felony charges against them.

The question over who should have had jurisdiction has floated in the background for years. The Tulalip Tribe chairwoman essentially told WDFW to back off in previous letters.

Following reports on this case, the Northwest Indian Fisheries Commission wrote a similar letter, urging them to stop enforcement actions that violated law. The letter said it looked like WDFW was, "focusing its enforcement efforts against tribal members who typically do not have the resources to defend themselves."

It’s a similar argument to what attorney Gabe Galanda had said in court, arguing that rather than go after powerful tribes – WDFW was instead going after individual tribe members.

WDFW has denied that it was going after tribal members, though questions were by defense attorneys about hand-written notes by WDFW investigator Wendy Willette. Those notes included questions like, "Why is PSSD selling crab to other wholesalers while monopolizing the Tulalip crab fishery?" and "Why has PSSD taken all business from other established Tulalip buyers?"

Galanda specifically noted her use of terms "reverse-racism," and a quote: "We’re going to sell to our own kind now," in her notes.

The latest ruling doesn’t mean things are over for Shopbell and Paul, it’s still possible that the state could appeal the decision. To date, WDFW has made it clear that despite the complaints of racism, and targeting of tribal members that they've simply followed the investigation where it led to.

WDFW issued the following statement after the charges were dismissed:

"The Washington Department of Fish and Wildlife (WDFW) and tribal co-managers take the protection of natural resources seriously. Our jobs require us to investigate and document apparent violations of law and submit them to prosecutors and the courts.  This does not mean that every charge and every case that gets referred leads to a successful prosecution.

"Both state and tribal commercial fish dealing licenses and their associated laws and rules are designed to help enforcement agencies track natural resource products from the point of harvest all the way to the consumer. These requirements help ensure consumer confidence in the safety and sustainability of the seafood they eat. Both WDFW and regional tribes strive to maintain healthy population levels of fish and shellfish species in Washington while providing a safe and healthy food source to its residents. "