The Supreme Court ruled Thursday in a 5-4 decision that the Biden administration can repeal the Trump administration’s Migrant Protection Protocols, commonly known as the "Remain in Mexico" policy, reversing a lower court ruling.

AMARILLO, Texas - A federal judge on Thursday temporarily blocked the Biden administration from ending a Trump-era policy requiring asylum-seekers to wait in Mexico for hearings in U.S. immigration court.

U.S. District Judge Matthew Kacsmaryk in Texas stayed the termination until legal challenges by Texas and Missouri are settled but didn't order the policy reinstated. The impact on the program wasn't immediately clear.

The decision comes as El Paso, Texas, and other border cities face a daily influx of migrants that could grow larger if separate asylum restrictions enacted under President Donald Trump end next week as scheduled.

Thursday's ruling could prove to be a temporary setback for the Biden administration, which may appeal.

The Department of Homeland Security said in a statement that it disagreed with the ruling and was considering its next steps. It said the government was well within its authority to end the policy. 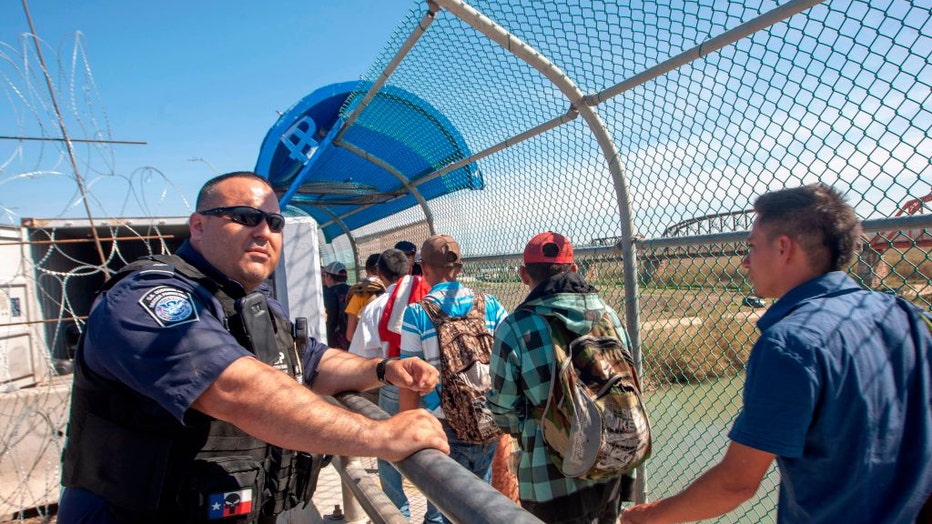 FILE-Sixteen Central American migrants cross the International Bridge II to be interviewed by U.S. immigration authorities and have the possibility of receiving asylum. (JULIO CESAR AGUILAR/AFP via Getty Images)

Under Trump, about 70,000 asylum-seekers were forced to wait in Mexico for U.S. hearings under the policy introduced in January 2019. President Joe Biden — who said it "goes against everything we stand for as a nation of immigrants" — suspended the policy on his first day in office.

That sparked a long and tortured legal and administrative path.

Kacsmaryk, a Trump appointee in Amarillo, ordered that the policy be reinstated in 2021. The Biden administration complied with the order after agreeing to changes and additions demanded by Mexico. But it didn't enforce the policy widely and only a few thousand people were sent back to wait in Mexico.

The U.S. Supreme Court ruled 5-4 in June that Biden had the ability to end what technically are known as Migrant Protection Protocols. But it threw back to Kacsmaryk one main issue: determining whether the administration’s action was "arbitrary and capricious" and thus violated federal law for crafting regulations.

In his 35-page ruling, the judge said it was likely an October 2021 memo that was the administration's latest effort to nail down termination of the policy did indeed appear to violate the law.

Among other things, the administration failed to consider the benefits of the policy, including reducing illegal immigration and "unmeritorious asylum claims," the ruling said.

Trump made the policy a centerpiece of border enforcement, which critics said was inhumane for exposing migrants to extreme violence in Mexico and making access to attorneys far more difficult.

Kacsmaryk said the Biden administration memo mentioned conditions that migrants might face while in Mexico but not the hardships they face "when making the dangerous journey to the southern border" in the first place.