U.S. Supreme Court Justice Ruth Bader Ginsburg, died at 87 of metastatic pancreatic cancer, according to the Associated Press. She was the oldest sitting member on the court.

WASHINGTON (AP) - President Donald Trump met Monday with Judge Amy Coney Barrett at the White House as the conservative jurist emerged as a favorite to replace the late Ruth Bader Ginsburg on the Supreme Court, the start of a monumental Senate confirmation fight over objections from Democrats it’s too close to the November election.

Trump said he expects to announce his pick by week’s end, before the burial of Ginsburg, the court's liberal icon, at Arlington National Cemetery.

The president told reporters he was still going to be interviewing other candidates and might meet with Judge Barbara Lagoa when he travels to Florida later this week. But Barrett has long been favored by conservatives, and those familiar with the process said interest inside the White House seemed to be waning for Lagoa amid concerns by some that she did not have a proven record as a conservative jurist.

Democrats, led by presidential nominee Joe Biden, are protesting the Republicans' rush to replace Ginsburg, saying voters should speak first, on Election Day, Nov. 3, and the winner of the White House should fill the vacancy.

RELATED: Trump calls Ruth Bader Ginsburg ‘an amazing woman,’ Biden says she ‘stood for all of us’

The mounting clash over the vacant seat — when to fill it and with whom — injects new turbulence in the presidential campaign with the nation still reeling from the coronavirus pandemic that has killed nearly 200,000 Americans, left millions unemployed and heightened partisan tensions and anger.

Up until now, the race has been largely a referendum on how Trump has managed or mismanaged the COVID-19 pandemic.

Democrats point to hypocrisy in Republicans trying to rush through a pick so close to the election after Senate Majority Leader Mitch McConnell led the GOP in refusing to vote on a nominee of President Barack Obama in February 2016, long before that year’s election. Biden is appealing to GOP senators to “uphold your constitutional duty, your conscience” and wait until after the election.

Ginsburg, 87, died Friday of metastatic pancreatic cancer. She will lie in state at the U.S. Capitol this week, the first woman ever accorded that honor. First, her casket is to be on view mid-week on the steps of the high court. She is to be buried next week in a private service at Arlington National Cemetery. 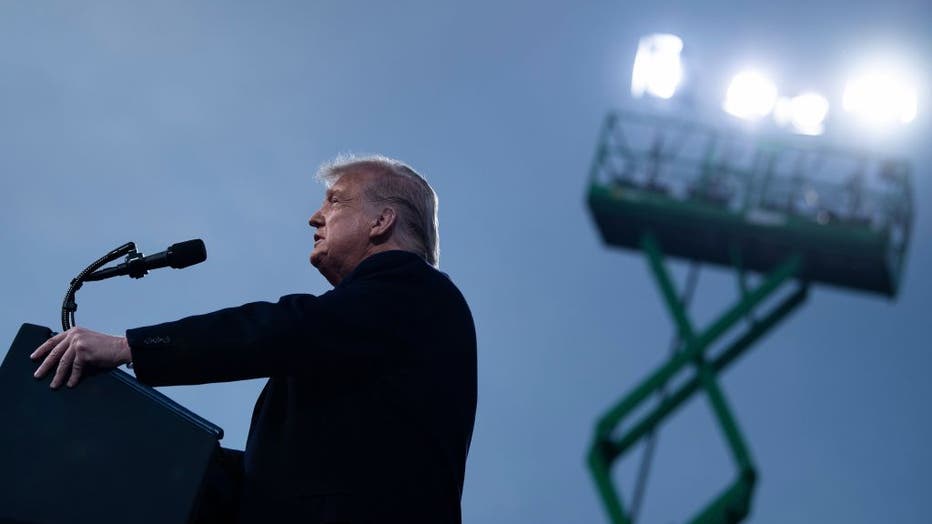 Conversations in the White House and McConnell’s office have been increasingly focused on Barrett and Lagoa, according to a person granted anonymity to discuss the private deliberations.

A judge on the U.S. Court of Appeals for the 7th Circuit, Barrett, 48, was a strong contender for the seat that eventually went to Brett Kavanaugh in 2018. At the time, Trump told confidants he was “saving” Barrett for Ginsburg’s seat.

Lagoa has been pushed by some aides who tout her political advantages of being Hispanic and hailing from the key political battleground state of Florida.

Trump said he is planning to name his pick by Friday or Saturday, ahead of the first presidential election debate. With just over a month before the election, McConnell said the Senate has “more than sufficient time."

No nominee has won confirmation so quickly since Sandra Day O’Connor — with no opposition from either party — became the first woman to serve on the Supreme Court in 1981.

Both sides are mobilizing for a wrenching confirmation fight punctuated by crucial issues before the court — healthcare, abortion access and even the potential outcome of the coming presidential election. Some protesters showed up early Monday morning outside the homes of key GOP senators.

At a Trump rally later Monday in Ohio, people chanted, “Fill the seat!”

Trump has said he would choose a woman, and he admitted that politics may play a role. He gave a nod to another election battleground state, Michigan, and White House officials confirmed he was referring to Joan Larsen, a federal appeals court judge there.

The president also indicated that Allison Jones Rushing, a 38-year-old appellate judge from North Carolina, is on his short list. His team is also actively considering Kate Todd, the White House deputy counsel who has never been a judge but was a clerk for Justice Clarence Thomas.

As the Senate returned to Washington on Monday, several key GOP senators, including Mitt Romney of Utah, declined to say whether they would agree to a swift vote.

Four Republicans could halt a quick confirmation and Trump criticized Republican Sens. Susan Collins of Maine and Lisa Murkowski of Alaska for opposing a vote before elections. The president warned they would be “very badly hurt” by voters.

Others, including GOP Sens. Chuck Grassley of Iowa and Cory Gardner of Colorado, declined to join in opposing the president's plan.

Trump went so far as to disparage reports that Ginsburg had told her granddaughter it was her wish that a replacement justice not be confirmed until the inauguration of a new president. With no evidence — just “it sounds to me like” — he suggested the wish came from his political foes including Rep. Adam Schiff, the House Intelligence Committee chairman.

Schiff said Trump sank to a new “low” with that comment. He said he had nothing to do with Ginsburg’s dying wish but would “fight like hell to make it come true.”

A day earlier, Biden appealed to Republicans to join Murkowski and Collins in opposing a confirmation vote before the Nov. 3 election. He said, “Let the people speak. Cool the flames that have engulfed our country.”

On Monday, Biden focused on joblessness and the pandemic rather than the court vacancy as he campaigned in Wisconsin, aligning himself with the country’s workers, especially those who voted for Trump in 2016 after having backed Obama and himself four years earlier.

He noted that COVID-19 deaths in the U.S. are surging past 200,000 and said of the count, which many Democrats say Trump has done too little to stop, “I worry we’re risking becoming numb to the toll that it has taken on us and our country and communities like this.”

Biden and his team are working closely with Democratic leaders in Congress, and he has spoken with Schumer.

The sudden vacancy seems certain to electrify both parties: Democrats were breaking fundraising records while a packed Trump crowd in North Carolina Saturday loudly chanted “Fill that seat.” But it remains unclear if the high bench vacancy will persuade disenchanted Republicans to return to Trump or fire up women or suburban voters to break for Biden.

Republicans hold a 53-47 edge in the Senate. If there were a 50-50 tie, it could be broken by Vice President Mike Pence.