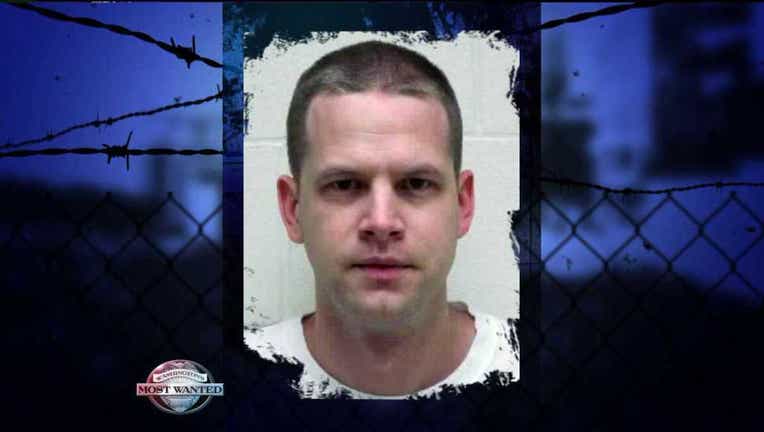 FUGITIVE CAPTURED Dec 12, 2012 -- U.S. Marshals say Jonathan Voss was arrested Wednesday at his girlfriend's home in Yakima. The U.S. Marshals Pacific Northwest Violent Offenders Task Force made contact at that address with his girlfriend, who stated Voss was there, but she was unaware of his location in the house. Task Force officers saw Voss leave an outbuilding located behind the residence, but then quickly went back inside and locked the door when he saw deputies. Deputies breached two doors in the outbuilding where they found Voss hiding inside of a spiderhole that was dug in the back corner. Voss was dressed in full military BDU's and combat boots. Marshals say he admitted to seeing himself on Washington’s Most Wanted. He also admitted digging the hole as a hiding place in response to having seen himself on show. Voss was booked into the Yakima County Jail. ; FUGITIVE WANTED BY DOC IN PIERCE COUNTY Nov 30, 2012-- It plays like a prison movie plot: An inmate fakes sick, setting up a scheme to get to a hospital and pull off a strong-armed escape. But, the script is all-too real -- and so is the manhunt for this week’s top fugitive. It all went down on Thanksgiving morning. While families were planning their holiday feast, cops say convicted sex offender, Jonathan Voss, was planning his jail escape. “Voss was arrested on Thanksgiving,” says Department of Corrections Ofc. Emily Isaacs. “When he was taken to the jail, he said he needed medical attention, saying he was sick, and faking an illness. He was transported to the hospital where his restraints were removed so he could be treated. But, when he was told the restraints were going to go back on him, he ripped out his IV, ripped off all the medical equipment on him, charged the officer, shoved him out of his way, and took off, escaping from the hospital." Voss is a high-violent offender supervised by the DOC out of Pierce County, but that hospital he escaped from is in Enumclaw. Here are the details on JONATHAN VOSS:

He has a slew of convictions for failing to register as a sex offender, so this latest run from the law is far from his first. If you know how cops can get missing sex offender and escaped inmate, Jonathan Voss, back behind bars, call an anonymous tip into: CRIME STOPPERS: 1-800-222-TIPS You must call the Crime Stoppers hotline with your tip to be eligible to receive a cash reward for information leading to a fugitive’s arrest. CLICK HERE for information on how to TEXT A TIP to Crime Stoppers