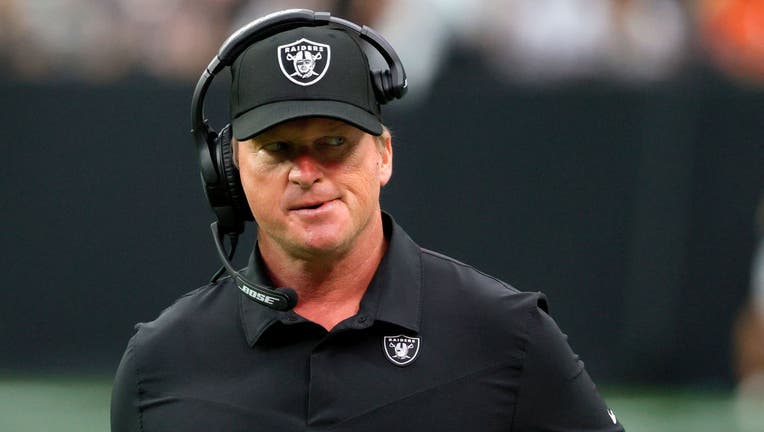 LAS VEGAS, NEVADA - OCTOBER 10: Head coach Jon Gruden of the Las Vegas Raiders reacts during a game against the Chicago Bears at Allegiant Stadium on October 10, 2021 in Las Vegas, Nevada. The Bears defeated the Raiders 20-9. (Photo by Ethan Miller/G

According to multiple reports, Gruden informed his staff he will resign as head coach after a series of emails showed him delivering racist, homophobic and misogynistic comments in emails during his time at ESPN.

Gruden later announced through the Raiders he was resigning.

"I have resigned as Head Coach of the Las Vegas Raiders. I love the Raiders and do not want to be a distraction. Thank you to all the players, coaches, staff, and fans of Raider Nation. I’m sorry, I never meant to hurt anyone," he said in a statement.

A bombshell report from the New York Times on Monday night revealed Gruden, while he was a commentator at ESPN, sent homophobic, misogynistic and other distasteful emails to former Washington Football Team president Bruce Allen between 2010 and 2018. The back-and-forth came before Gruden signed a 10-year, $100 million contract with the Las Vegas Raiders.

Gruden in at least one email, according to the Times, called NFL Commissioner Roger Goodell an anti-gay slur and a "clueless anti-football p---y" and argued that Goodell shouldn’t have allegedly pressured then-St. Louis Rams coach Jeff Fisher to draft "queers," in reference to former NFL defensive lineman Michael Sam, who was the first openly gay player to be selected in the draft.

The email appeared to show a complete disconnect from Gruden’s messaging when his own player Carl Nassib came out as gay before the start of the 2021 season and became the first active openly gay NFL player.

According to the newspaper, Gruden denounced the emergence of female referees. Sarah Thomas became the first permanent female official in NFL history in 2015. Shannon Eastin had also become a replacement official during the 2012 season. In 2017, Gruden reportedly replied to a sexist meme from Hooters co-founder Ed Droste about female NFL officials and replied, "nice job roger."

Gruden’s criticism and mocking was not limited to Goodell and female referees. The newspaper reported that Gruden wrote that former All-Pro defensive back Eric Reid should be fired for protesting during the national anthem and criticized a bill that would’ve forced the then-Washington Redskins to change their name in 2015, Caitlyn Jenner and Joe Biden when he was Barack Obama’s vice president.

The emails were reviewed as part of an NFL workplace investigation into the Washington Football Team. Gruden’s emails about Goodell were flagged in the investigation. Among them, were disparaging remarks about NFL Players Association executive director DeMaurice Smith.

Gruden wrote in the chain: "Dumboriss Smith has lips the size of Michelin tires."

The email was first obtained by the Wall Street Journal on Friday.

Gruden said he didn’t have a racist bone in his body and apologized in a statement to the Wall Street Journal. He admitted to ESPN on Sunday that there were also emails that included vulgar remarks about Goodell.

"I was in a bad frame of mind at the time [in 2011], and I called Roger Goodell a [expletive] in one of these emails too. They were keeping players and coaches from doing what they love with a lockout. There also were a lot of things being reported publicly about the safety of the sport that I love. I was on a mission with high school football [in the Tampa, Florida, area] during that time, and there were a lot of parents who were scared about letting their kids play football. It just didn't sit well with me," he said.

Gruden said there may have been between five and seven emails that were flagged by the league. The NFL told the outlet it is considering discipline against Gruden despite his not being in the league at the time.

When asked about the emails again on Sunday night, Gruden pushed back and said he wasn’t a racist.

"All I can say is I’m not a racist. I can’t tell you how sick I am. I apologize again to De Smith. But I feel good about who I am and what I’ve done my entire life. I apologize again for the insensitive remarks. I had no racial intentions with those remarks at all," he said, via The Athletic.

"I’m not going to answer all these questions today. … I think I’ve addressed it already. I can’t remember a lot of the things that transpired 10 or 12 years ago. But I stand here in front of everybody apologizing. I know I don’t have an ounce of racism in me. I’m a guy who takes pride in leading people together, and I’ll continue to do that for the rest of my life. And again, I apologize to De Smith and anybody out there that I have offended."

Smith opened up about the Gruden controversy on Twitter.

"The email from Jon Gruden – and some of the reaction to it – confirms that the fight against racism, racist tropes and intolerance is not over. This is not about an email as much as it is about a pervasive belief by some that people who look like me can be treated as less," Smith started off.

"The email has also revealed why the comments by some with powerful platforms to explain this away are insidious and hypocritical. It is as if there is a need to protect football above the values of equality, inclusion and respect."

"The powerful in our business have to embrace that football itself has to be better, as opposed to making excuses to maintain the status quo."

Gruden has said he has been trying to reach out to Smith to apologize. Smith said he received Gruden’s messages.

"I appreciate that he reached out to me & I told him that we will connect soon, but make no mistake, the news is not about what is said in our private conversation, but what else is said by people who never thought they would be exposed and how they are going to be held to account," Smith tweeted.

Raiders owner Mark Davis condemned Gruden on Friday and said he would address the matter with Gruden. With the latest report, it’s clear that Gruden’s seat is hotter than it was just a few days ago.

Get updates on this story from FoxNews.com.