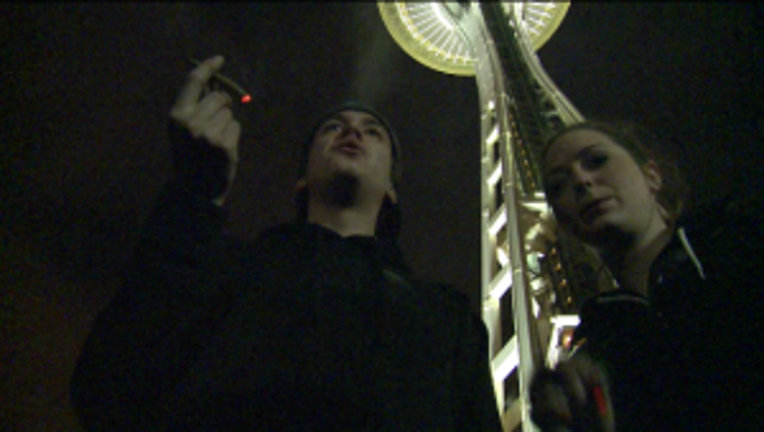 SEATTLE -- Residents fired up joints in a 'smoke-out' at Seattle's iconic Space Needle and at other locations as recreational marijuana use became legal in Washington state at 12:01 a.m. Thursday.

Expecting celebratory pot smoking on the streets, the Seattle Police Department told its officers Wednesday night to only issue verbal warnings to those seen violating the new law's provisions, one of which is not to smoke pot in public.

"Until further notice, officers shall not take any enforcement action -- other than to issue a verbal warning -- for a violation of I-502," the marijuana legalization initiative, said the SPD email sent out to officers.

Voters in the Nov. 6 elections in Washington state and Colorado became the first in the nation to approve recreational use of marijuana. Washington's law took effect 30 days after Election Day.

Seattle's pot users celebrated early Thursday -- and some of those who could not wait for the midnight hour lit up Wednesday night -- in a smoke-out at the Space Needle. The event was organized by the local chapter of NORML, the organization that works to reform marijuana laws.

Yet even supporters of legalized pot admit there is still a lot of gray area in the new law, which makes it legal to possess up to one ounce of marijuana. But the catch is that it is illegal to sell, grow or give it away marijuana. It will be that way for the next year while the Washington state Liquor Control Board is putting together licensing rules for the legal growing, transporting and selling of pot.

Even after that happens, there will be no public smoking areas for pot users, such as there is for cigarette smokers. In fact, smoking pot in public places will still be illegal. And it will be illegal on federal property, including in national parks. Administrators of universities in Washington said it will be banned on campuses, too, just as alcohol is prohibited.

“We are in uncharted territory here,” Seattle City Attorney Pete Holmes said Wednesday. “We are trying to substitute a legal license system for what is nearly a wholly illegal system.”

King County prosecutor Dan Satterberg said because marijuana is still illegal on the federal level, he expects the Justice Department to file a lawsuit to stop the state from regulating the selling and taxing of pot in retail stores.

“It's a little early for marijuana advocates to be doing the touchdown dance, because this play is going to be reviewed in the booth,” Satterberg said.

Holmes said he remains hopeful that federal authorities will respect the will of the voters.

If they do, supporters say the new law will not only keep thousands of people out of jail, it will raise a half-billion dollars a year in tax revenue.

U.S. Attorney Jenny A. Durkan in Seattle issued the following statement Wednesday afternoon: "The Department of Justice is reviewing the legalization initiatives recently passed in Colorado and Washington state. The department’s responsibility to enforce the Controlled Substances Act remains unchanged. Neither states nor the Executive branch can nullify a statute passed by Congress.

"In enacting the Controlled Substances Act, Congress determined that marijuana is a Schedule I controlled substance. Regardless of any changes in state law, including the change that will go into effect on December 6th in Washington state, growing, selling or possessing any amount of marijuana remains illegal under federal law.

"Members of the public are also advised to remember that it remains against federal law to bring any amount of marijuana onto federal property, including all federal buildings, national parks and forests, military installations, and courthouses.”

The leader of the "no on I-502" campaign, meanwhile, spoke about what he called the drawbacks of pot legalization. Watch the interview below.