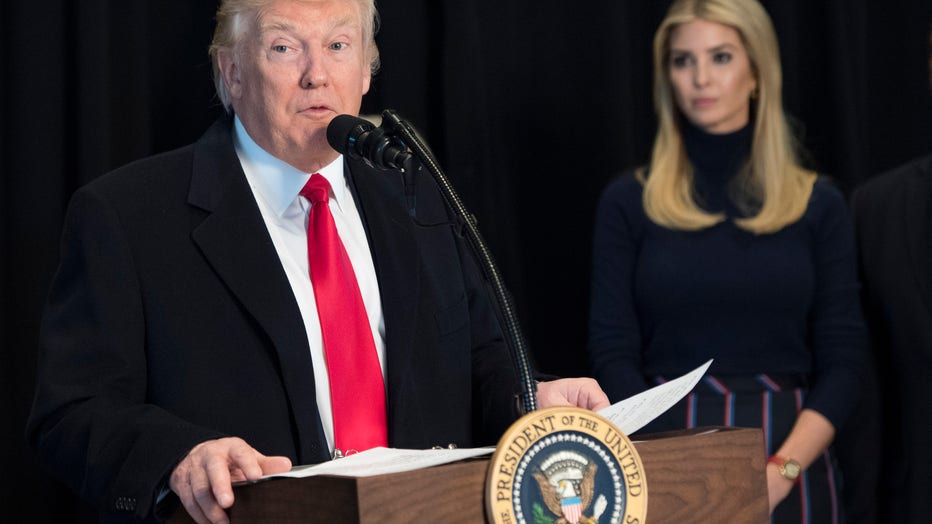 President Donald Trump drew stinging criticism Tuesday for his belated response to the recent spike in anti-Semitic vandalism and threats against Jewish communities across the country.

At a visit to the National Museum of African American History and Culture early Tuesday, the president, who last week described himself as “the least anti-Semitic person,” described the wash of threats and crimes against Jewish communities as “horrible.”

“It's gonna stop and it has to stop,” Trump told NBC News — an answer Jewish leaders said was not only overdue, but out of step with the actions of his administration.

“The President’s sudden acknowledgement is a Band-Aid on the cancer of Antisemitism that has infected his own Administration,” said Steven Goldstein, executive director of the Anne Frank Center for Mutual Respect, in a statement. “His statement today is a pathetic asterisk of condescension after weeks in which he and his staff have committed grotesque acts and omissions reflecting Antisemitism, yet day after day have refused to apologize and correct the record.”

Trump’s response came hours after a Tuesday-morning tweet from Hillary Clinton, his Democratic rival in the November election, urging the president to address the attacks.

“ threats, cemetery desecration, and online attacks are so troubling and they need to be stopped,” Clinton said. “Everyone must speak out, starting with .

Groups such as the Anne Frank Center say that Trump’s response on Tuesday did little to reassure Jewish communities that he would substantively deal with anti-Semitism, especially given that, as Goldstein said, the administration’s attitude toward anti-Semitism “is the worst we have seen from any Administration” — a reference to the White House’s refusal to mention Jews in its Holocaust Remembrance Day statements late last month, and its subsequent defensiveness to criticism of the omission from Jewish leaders and anti-discrimination groups.

Almost 70 bomb threats were reportedly called in to Jewish community centers in 27 states over the last month, prompting evacuations and rattling communities. Over the long President’s Day weekend, almost 200 headstones were vandalized at a Jewish cemetery in University City, Missouri.

White House Press Secretary Sean Spicer, when asked Tuesday about the Anne Frank Center’s statement, said that Trump has been “unbelievably forceful” in denouncing discrimination in the past, but that “no matter how many times talks about this, it's never good enough."

"I wish that had praised the President for his leadership in this area," Spicer added.

Trump was asked about the rise of anti-Semitic hate crimes (and what he would do to curb them) twice last week by two reporters during press conferences at the White House.

He did not issue a denouncement either time and, in the second, hotly criticized exchange, called the question “insulting” before brusquely telling the reporter, an Orthodox Jew, to sit down.

The road ahead, but with no roadmap

Trump’s remarks on anti-Semitic threats must be followed by a comprehensive plan detailing the steps he will take to combat rising anti-Semitism, many Jewish groups have charged.

“To combat a problem you first have to define it, and the definition of this particular problem is anti-Semitism, pure and simple. Then you need a robust plan of action,” American Jewish Committee CEO David Harris said in an e-mailed statement. “Let's hope it will be forthcoming — and soon.”

No such plan has come out of the White House yet, but Trump’s statements came the same day as reports claiming that he is slated to narrow the focus of the Obama’s Countering Violent Extremism program to target only extremist Islamist groups — a notable pivot from the existing program, which works to deter domestic attacks stemming from any violent ideology through community partnerships and tolerance campaigns. In the past, grants from the program have helped rehabilitate former Neo-Nazis.

It is not immediately known how a shift away from the broader focus would impact law enforcement efforts around anti-Semitic hate crimes, and the White House is yet to confirm or deny the report’s details.

However, it’s not hard to imagine that Trump, who ran on a campaign that focused on eradicating “radical Islamic terror,” would recast the program to meet those more specific goals.

A step like that could be a mistake, though, according to data compiled by the Anti-Defamation League. White supremacists, the group says, are “by far the most violent” of any extremist movements in the U.S., committing about 83 percent of the extremist-related murders in the country in the past 10 years.