OLYMPIA -- An enormous debris field is creeping toward the U.S. in the wake of the massive earthquake and tsunami that shook Japan in 2011, killing nearly 16,000 people and launching 1.5 million tons of floating objects into the sea.

That most concentrated part of the junk field is easily broader than Texas and centered approximately 1,700 miles off the Pacific coast, between California and Hawaii, although the National Oceanic and Atmospheric Administration (NOAA) hasn't published more precise estimates. The agency estimates that the trash overall is scattered across an area in the ocean about three times the size of the continental United States. 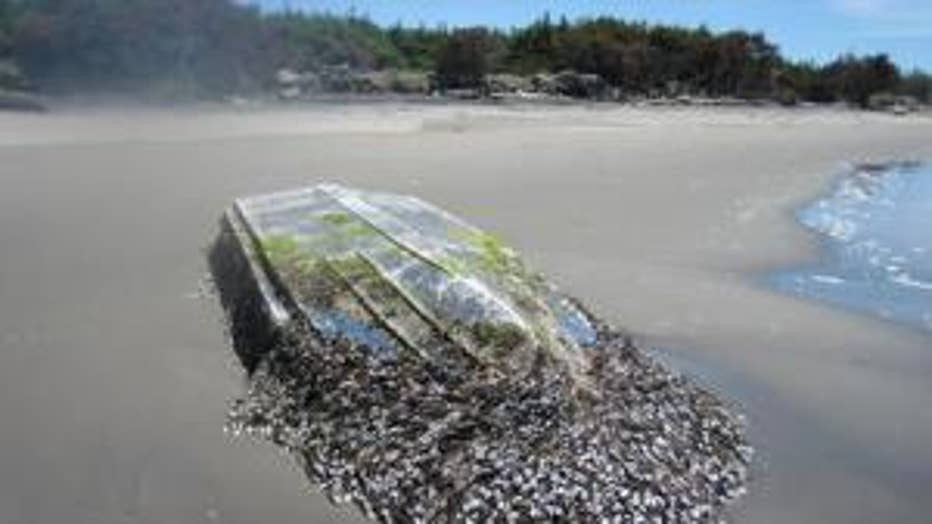 The debris ranges from pulverized particles to entire docks that washed over from Japan, to intact boats, motorcycles, soccer balls, traditional Japanese flooring, and even some Japanese sea creatures never seen on the U.S. West Coast. “High windage” items reached the Pacific Northwest as early as winter 2011. Smaller debris is “sailing” here on the tides -- NOAA estimates that the widely scattered detritus may show up intermittently along shorelines for a long period of time, over the next year or more.

In addition to physical junk, a wave of slightly radioactive water released from the broken Japanese Fukushima nuclear reactor is predicted to reach shore in 2014 -- but scientists point out that it is so diluted that it is harmless.

In one of the more dramatic photos of debris, two rooftops and an upside-down boat can be seen floating in the ocean. In another, a giant dock from Japan washed ashore in Oregon.

Even more interesting may be what's living on the dock.

"At first we were only thinking about objects like the floating docks, but now we’re finding that all kinds of Japanese organisms are growing on the debris," John Chapman of the Marine Science Center at Oregon State University told FoxNews.com.

"We've found over 165 non-native species so far," he added. "One type of insect, and almost all the others are marine organisms … we found the European blue mussel, which was introduced to Asia long ago, and then it grew on a lot of these things that are coming across the Pacific ... we’d never seen it here, and we don’t particularly want it here," he said, arguing that it could be "invasive" and displace current marine life.

Many other creatures have been found, too.

"In the debris we found the Northeastern sea star ... as well as a type of brown algae that's used to make miso soup. We’d never seen it here before."

For more on this FOX News story, click here.