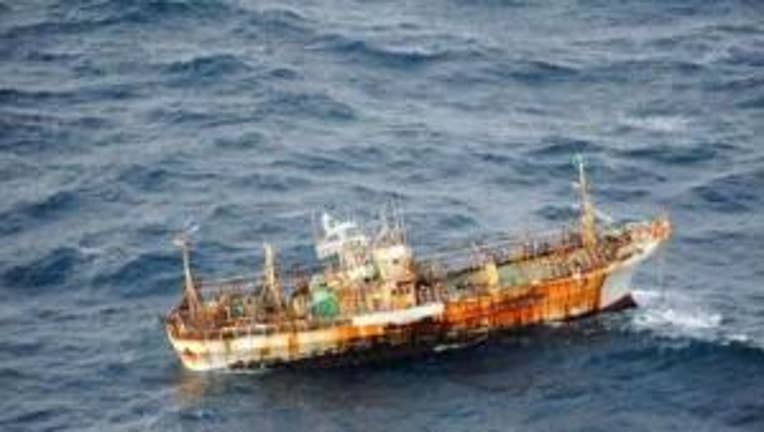 SEATTLE -- A 150-foot Japanese fishing vessel that was washed away last year in Japan’s major earthquake and tsunami has traveled across the Pacific Ocean and is about 120 nautical miles off Canada’s Haida Gwaii, formerly the Queen Charlotte Islands, Sen. Maria Cantwell, D-Wash., said Friday.

Japanese local officials confirmed that the boat had originated in Japan, she said.

On its current trajectory and speed, the vessel won’t make landfall for approximately 50 days, Cantwell, a member of the Senate Commerce, Science and Transportation Committee, said in a statement.

In conversion, 120 nautical miles is about 138 statute miles. The name of the Queen Charlotte Islands was formally changed by Canada in 2010 to Haida Gwaii ("Islands of the People").

“This 150-foot fishing vessel is the first major West Coast tsunami debris confirmed by Japanese officials. And now, we’ve learned that larger debris could reach our coastlines sooner than expected. With some debris already moving towards the West Coast, we need more data and better science to track and respond to tsunami debris,” Cantwell said.

“This discovery is further proof that the U.S. government needs a comprehensive plan for coordination and response to the tsunami debris. Coastal residents need to know who is in charge of tsunami debris response – and we need clearer answers now,” Cantwell said.

She said that residents "can’t afford to wait until more tsunami debris washes ashore to understand its potential impact on Washington state’s $10.8 billion coastal economy. And we can’t afford to cut the NOAA marine debris program by 25 percent with no plan in place for Japanese tsunami debris."

After a devastating earthquake and tsunami struck Japan on March 11, 2011, an enormous amount of debris was washed out to sea. One year later, very little is known about the composition or trajectory of the debris, other than it's moving across the Pacific toward the United States.