WASHINGTON - A House committee tasked with investigating the Jan. 6 Capitol insurrection is moving swiftly Tuesday to hold at least one of Donald Trump's allies in contempt as the former president is pushing back on the probe in a new lawsuit.

Trump is aggressively trying to block the committee's work by directing former White House aide Steve Bannon not to answer questions in the probe while also suing the panel to try to prevent Congress from obtaining former White House documents. But lawmakers on the House committee say they will not back down as they gather facts and testimony about the attack involving Trump's supporters that left dozens of police officers injured, sent lawmakers running for their lives and interrupted the certification of President Joe Biden's victory.

"The former president’s clear objective is to stop the Select Committee from getting to the facts about January 6th and his lawsuit is nothing more than an attempt to delay and obstruct our probe," said Chairman Bennie Thompson, D-Miss., and Republican Rep. Liz Cheney of Wyoming, the panel’s vice chairwoman, in a joint statement late Monday.

They added: "It’s hard to imagine a more compelling public interest than trying to get answers about an attack on our democracy and an attempt to overturn the results of an election." 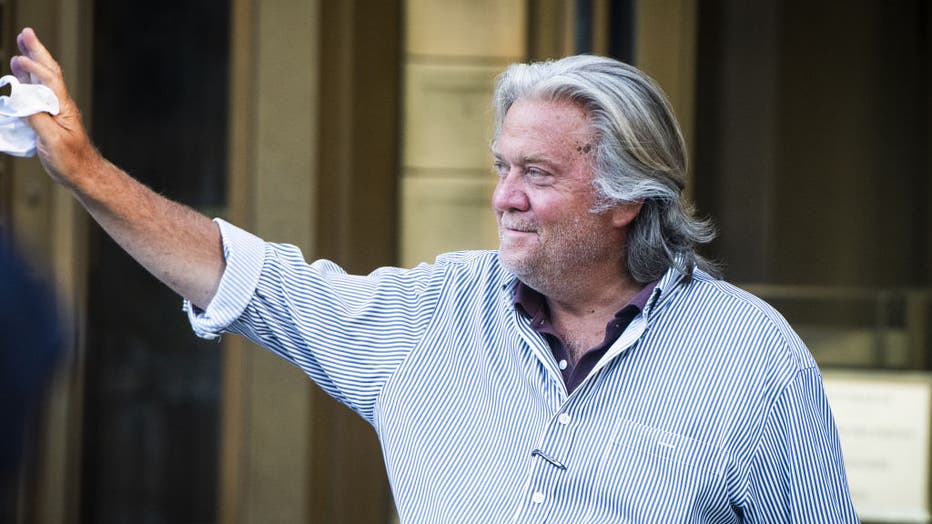 Trump’s lawsuit, filed after Biden decided to waive his right to block the document release over executive privilege concerns, claims that the panel’s August request was overly broad and a "vexatious, illegal fishing expedition," according to papers filed in federal court in the District of Columbia.

The lawsuit was expected, as Trump has repeatedly made clear that he will challenge the investigation of the violent attack by a mob of his supporters. But Trump’s challenge went beyond the initial 125 pages of records that Biden recently cleared for release to the committee. The suit, which names the committee as well as the National Archives, seeks to invalidate the entirety of the congressional request, calling it overly broad, unduly burdensome and a challenge to the separation of powers. It requests a court injunction to bar the archivist from producing the documents.

The Biden administration, in clearing the documents for release, said the violent siege of the Capitol more than nine months ago was such an extraordinary circumstance that it merited waiving the privilege that usually protects White House communications.

The legal challenge came a day before the panel is scheduled to vote to recommend that Bannon be held in criminal contempt of Congress for his defiance of the committee’s demands for documents and testimony. In a resolution released Monday, and scheduled to be voted out of the panel on Tuesday, the committee asserts that the former Trump aide and podcast host has no legal standing to rebuff the committee — even as Trump’s lawyer has argued that Bannon should not disclose information because it is protected by the privilege of the former president's office.

Bannon was a private citizen when he spoke to Trump ahead of the attack, the committee said, and Trump has not asserted any such executive privilege claims to the panel itself.

"Mr. Bannon appears to have played a multi-faceted role in the events of January 6th, and the American people are entitled to hear his first-hand testimony regarding his actions," the committee wrote in the resolution.

The resolution lists many ways in which Bannon was involved in the leadup to the insurrection, including reports that he encouraged Trump to focus on Jan. 6, the day Congress certified the presidential vote, and his comments on Jan. 5 that "all hell is going to break loose" the next day.

Once the committee votes on the Bannon contempt measure, it will go to the full House for a vote and then on to the Justice Department, which would decide whether to prosecute.

In a letter obtained by The Associated Press, the White House also worked to undercut Bannon's argument. Deputy Counsel Jonathan Su wrote that the president's decision on the documents applied to Bannon, too, and "at this point we are not aware of any basis for your client’s refusal to appear for a deposition."

White House Press Secretary Jen Psaki said Oct. 8, 2021, that President Joe Biden determined an assertion of executive privilege "is not warranted" for the first set of documents from the Trump White House.

"President Biden’s determination that an assertion of privilege is not justified with respect to these subjects applies to your client’s deposition testimony and to any documents your client may possess concerning either subject," Su wrote to Bannon's lawyer.

Bannon’s attorney said he had not yet seen the letter and could not comment on it. While Bannon has said he needs a court order before complying with his subpoena, former White House Chief of Staff Mark Meadows and former White House and Pentagon aide Kashyap Patel have been negotiating with the committee. It is unclear whether a fourth former White House aide, Dan Scavino, will comply.

The committee has also subpoenaed more than a dozen people who helped plan Trump rallies ahead of the siege, and some of them have already said they would turn over documents and give testimony.

The committee has demanded a broad range of executive branch papers related to intelligence gathered before the attack, security preparations during and before the siege, the pro-Trump rallies held that day and Trump’s false claims that he won the election, among other matters.