Actor James Cromwell glued his hand to a Starbucks counter during a PETA protest in New York City on May 10, 2022, calling for the coffee chain to stop charging extra for vegan milk. Credit: PETA via Storyful

The 82-year-old, known for his roles in "Babe," "L.A. Confidential," "The Green Mile," and TV roles like "Six Feet Under" and "Sucession," participated in a protest organized by the animal rights group People for the Ethical Treatment of Animals (PETA). The event was livestreamed on Facebook.

Cromwell sat on the Starbucks counter wearing a "Free the Animals" T-shirt, joined by several other protesters. In his other hand, the actor held a sign that read, "Starbucks: End the vegan upcharge," while he read a statement denouncing the extra fee for vegan milk alternatives.

"My friends at PETA and I are calling on Starbucks to stop punishing kind and environmentally conscious customers for choosing plant milks," Cromwell said in a statement. "We all have a stake in the life-and-death matter of the climate catastrophe, and Starbucks should do its part by ending its vegan upcharge."

Cromwell glued his hand to the counter, then later used a knife to scrape it off. Police said there were no arrests. 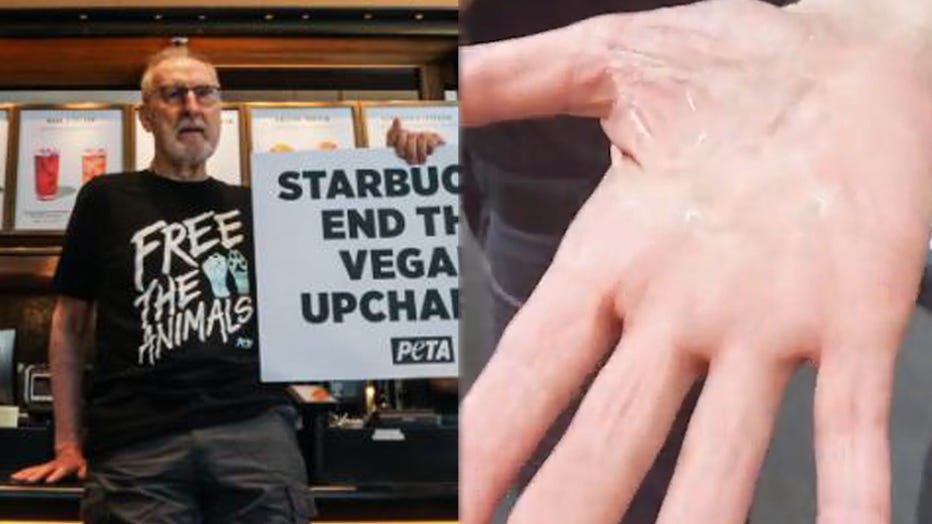 Actor James Cromwell is pictured at a Starbucks in midtown Manhattan protesting the chain’s extra charge for plant-based milk. He superglued his hand to the counter in protest, PETA said. (Credit: PETA via Storyful)

Starbucks' locations in the United States charge 50 cents to a dollar more for drinks made with plant-based milks.

"Customers can customize any beverage on the menu with a non-dairy milk, including soymilk, coconutmilk, almondmilk, and oatmilk for an additional cost (similar to other beverage customizations such as an additional espresso shot or syrup)," a Starbucks spokesperson said in a statement to the Associated Press. "Pricing varies market by market."

The spokesperson added that Starbucks respects customers’ right to voice their opinions "so long as it does not disrupt our store operations."

Cromwell, nominated for an Academy Award for his role as the farmer in "Babe," is a veteran protester who was charged with trespassing in 2017 for interrupting an orca show at SeaWorld in San Diego.

In its own statement, PETA said the dairy industry "is a major producer of the greenhouse gases that contribute to the climate catastrophe and is responsible for immense animal suffering."

The U.S. Environmental Protection Agency states that the agriculture industry accounted for about 11% of the total U.S. greenhouse gas emissions by the economic sector in 2020.

Livestock, and particularly cattle, produce methane as part of their normal digestive process — which represents "over a quarter of the emissions from the Agriculture economic sector," according to the EPA. Meanwhile, the management of manure accounts for about 12% of the total greenhouse gas emissions from the agriculture sector.