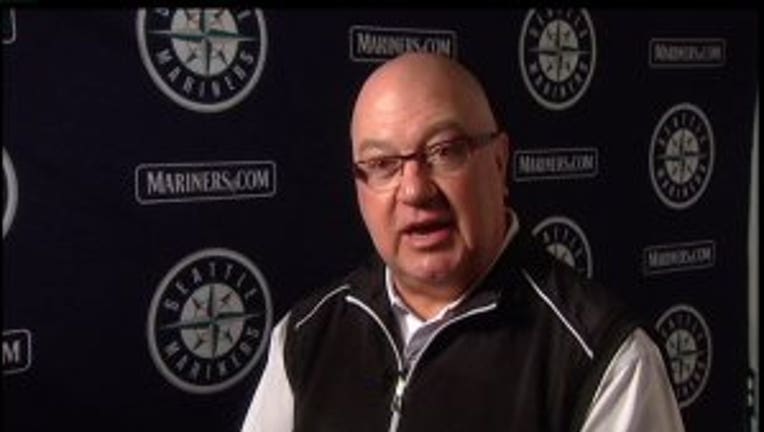 PEORIA, Ariz. -- Jack Zduriencik had quite the festive holiday season this offseason.

He spent most of it on the phone.

“Jack and I were talking on Christmas Day, New Years, Thanksgiving Day, whatever it may be,” Mariners Manager Eric Wedge said.

Even his vacation road trip with his wife, Debbie, was productive, despite laws against texting and driving.

“Funny enough, first time, I’d say ‘Debbie, here, answer this text message, tell him this, and this.’ It worked out pretty cool, actually. As long as I was willing to pull over when she wanted to take pictures, that was fine,” Zduriencik said.

Such was the life of the Mariners General Manager in what he calls his busiest off-season so far in Seattle.

“I don’t think there’s a question about that, because when the season ended, we knew exactly what we wanted to do.”

But what they wanted at first, never panned out. Slugger Josh Hamilton chose the Angels. Justin Upton used a no-trade clause to avoid coming to Seattle. Jack Z was forced to turn to Plan B.

“I don’t think I’ve ever seen anybody work as hard and as tireless as he was,” Wedge said. “Talking about kicking the tires. And just exhausting every option. And taking a good look at every opportunity, knowing what we wanted to accomplish.”

Mariners fans remain skeptical. After all, 12 years have passed without a playoff run. Others question a general manager who’s now counting on offense from a player he himself traded away from Seattle in 2009 – Michael Morse.

“You know, I tried to get him back a couple different times. So, one thing is, I’m not afraid to admit my mistakes, and that was one of them, quite frankly. I wish I’d have kept him.”

It’s that humility that endears many to Zduriencik, trusting patience will ultimately win the day. It might be his fifth season in Seattle, but projected stars are just now on the verge.

“Everybody wants to be a part of a winning program and a winning culture. We’re further ahead than probably most people think.”

It’s rhetoric that one day Zduriencik hopes the M’s will validate. After all, he’s seen it done before – he was with Mets when they won the world series in 1986, the Pirates during their playoff run in the early 90s, and most recently, helping build a contending team in Milwaukee.

“I saw how we went from a real low attendance to drawing three million fans a year,” Zduriencik said. And we’re going to do that here in Seattle. It’s not that far away. I’m proud of what the hawks did this year. Got a lot of friends on that coaching staff. Was like every other guy in Seattle, so when we get it going here, can’t wait to get the fans back in bundles.”