SEATTLE -- Fridays in Seattle have always been "Blue Friday."

Now, the mayor has made it official. Officially official.

Whereas, the 12s have shown their support and pride for the Seahawks by displaying their ‘I’m In!’ signs at home, work, school or car in order to join Seahawks coaches, players, and staff who reach up and tap the slogan with a hand as they access the field….

Now, therefore I, Edward B. Murray, Mayor of Seattle, do hereby proclaim January 9, 2015 to be in our city … SEAHAWKS BLUE FRIDAY!

Should the Panters win (gasp!) Seattle’s iconic record label Sub Pop has pulled together a gift basket, including vinyl LPs by Nirvana, Mudhoney, the Shins and the Postal Service, contemporary compact discs by Shabazz Palaces, Sleater-Kinney, Sarah Silverman and Luluc, and other music and memorabilia.

But with everyone wearing their blue Friday and throughout Saturday, it's impossible to imagine how the Panthers could conquer this blue wave.

The full official proclamation of "Seahawks Blue Friday" is below. 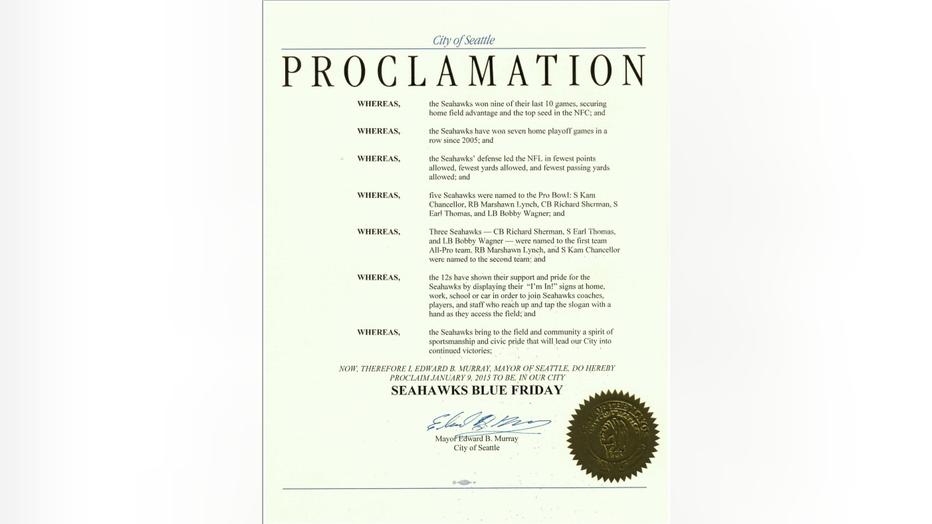