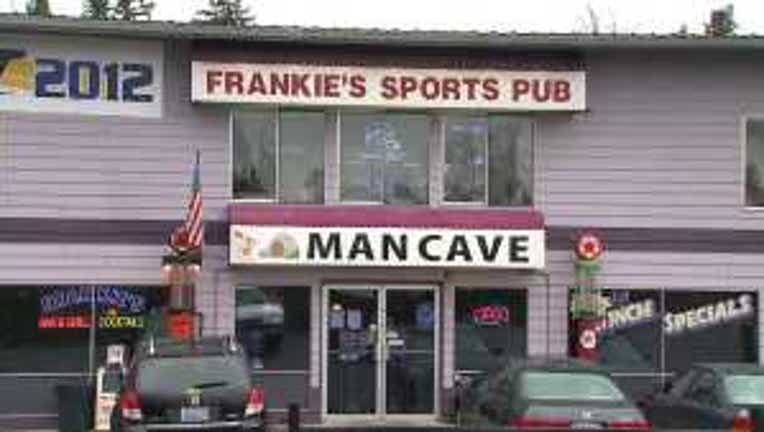 OLYMPIA, Wash. – Now that marijuana is legal in Washington, a bar owner in Olympia has come up with what is believed the first pot-smoking club in the state.

Frankie’s Sport Bar & Grill in Olympia features a sign outside encouraging people to come in and light up a joint in a special ‘private club’ the bar owner previously created for cigarette smokers on the second floor of his business. Once the marijuana became effective Thursday, owner Frank Schnarr simply opened club membership to pot smokers, too.

Schnarr charges members a $10 annual fee for his smoking club. The private club is a way to get around the state's ban on cigarette smoking in public bars and restaurants.

“The way the economy is now, I could lose this (bar) at any moment because I have no customers. To bring another type of person to come into my establishment is a plus to me,” Schnarr said Friday of his attempt to attract marijuana smokers to his club. Schnarr said that under the new law, marijuana cannot be bought or sold in the club -- just brought in and smoked.

Customer Harold Caldwell said he has been enjoying firing up joints in the club since Thursday. “This is my favorite place to go and it’s relaxing. I feel pretty good about it.”

Schnarr admits his move could place him on the radar of federal authorities, who are still debating what to do about the legalization of marijuana by voters Nov. 6  in Washington and Colorado.

But Schnarr didn't seem concerned. He said he thinks he’s just the first -- and that more private smoking rooms will soon pop up in the state.

“More power to them," Schnarr said of others possibly opening up. "If they can raise revenue for this state, that's what it's all about, that's what (making money) we're in business for.”

According to The New York Times, senior White House and Justice Department officials reportedly are considering plans for legal action against the marijuana laws in Washington and Colorado. Options reportedly include bringing cases against small-level users, filing lawsuits against the two states, or cutting off federal funding. But no decision was imminent.

Washington state Sen. Karen Fraser, D-Olympia, said of those options, “I feel those would be extreme moves and inappropriate.”

“Who knows, maybe we are the first of many states that are going to do this, and you know 100 years ago this is what happened with the women's right to vote. It was against the law at the federal level and then a few states boldly marched ahead,” she said.

UW political science professor Matt Barreto called it an “interesting bind for the president. My sense is they (federal authorities) will look the other way, but find a couple high-profile people who are well beyond the bounds of our new law and bust them, but leave everyone else completely alone.'”

If that happens, the target could be Schnarr at Frankie’s Bar & Grill.