SEATTLE -- If you think Seattle traffic is bad on a weekday morning, just wait to see what it looks like for the next three days.

Chinese President Xi Jinping’s visit to Seattle from Tuesday through Thursday will close several streets downtown and cause roving roadblocks to pop up all across the region.

City officials are already sounding the alarm, saying if commuters don’t have to go downtown, maybe they could take a few days off instead.

The road closures and bus re-routes will turn the morning commute into a nightmare for anyone who either lives and works downtown.

“The traffic backup will be impossible,” said Schuyler Thompson, who works downtown. “I guess I’ll walk if I do come downtown because I expect the absolute apocalypse.”

The Seattle Department of Transportation's Traffic Operations Center is doing what it can to plan early.

“I’m a little bit nervous,” said the SDOT's Mark Bandy. “I think we’re well-prepared but there’s stuff that can happen.”

Signal timing has already been adjusted at several intersections. Buses will be re-routed on the surface but the bus tunnel will stay open.

City officials suggest commuters change their work schedule or take the day off.

“I think I should get a hotel down here so I can sleep and walk to work tomorrow,” said Sunny Balfour.

“Look buddy, we make money when we work,” he said. “Alright?”

The Monorail will still be open to the public but police will be checking bags before people board.

Police said vehicles and pedestrians in the security zone are subject to search. 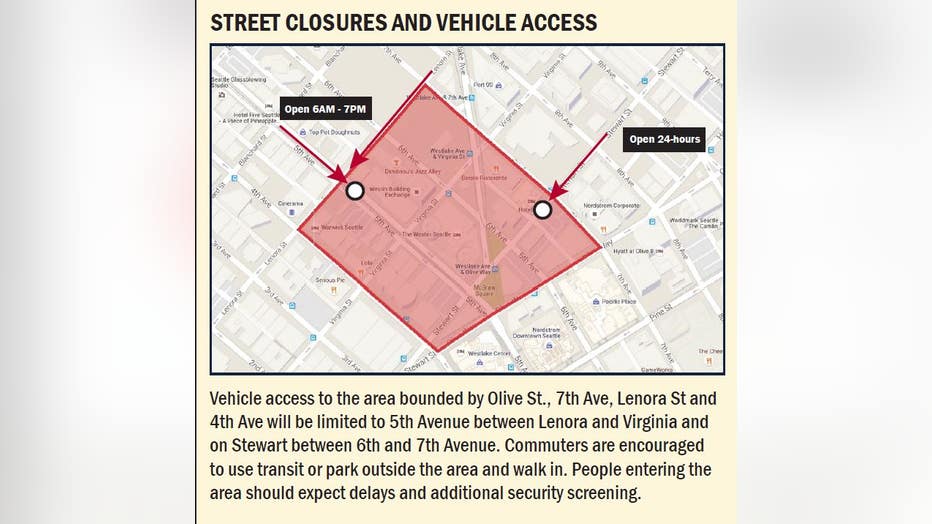