MINNEAPOLIS - Following several days of peaceful-turned-chaotic protests over the death of George Floyd, the Minneapolis National Guard, who have been called to assist local authorities in the ongoing unrest, posted a picture to their Twitter account which appeared to show some of the exhausted soldiers sleeping.

The caption read, “It’s been a long night for Citizen-Soldiers and Airmen.”

RELATED: Minnesota National Guard moves into Twin Cities as state works to crack down on riots

Floyd died on May 25 in Minneapolis after a white police officer pressed a knee into his neck. It was the latest in a series of deaths of black men and women at the hands of police in America that set off protests across the nation. 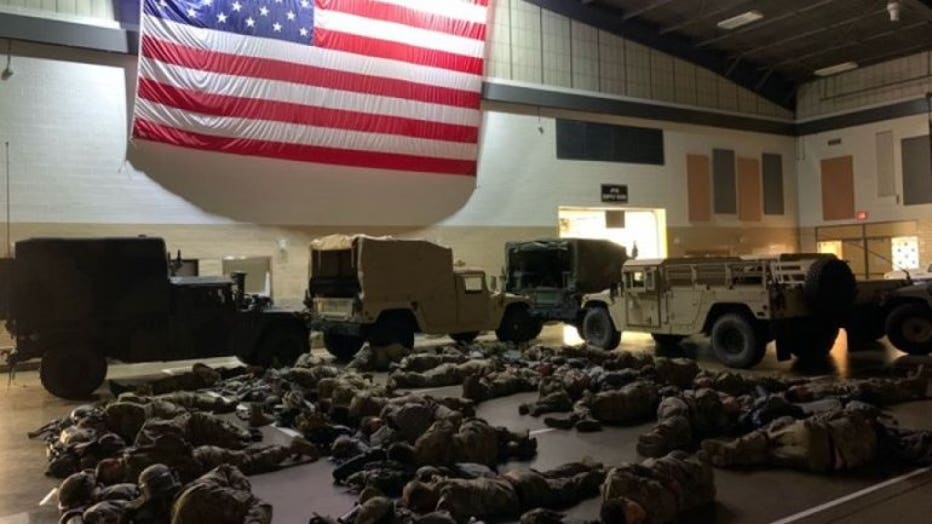 In Minneapolis, the city where the protests began, police, state troopers and National Guard members moved in soon after an 8 p.m. curfew took effect to break up the demonstrations. The show of force came after three days in which police largely avoided engaging protesters, and after the state poured more than 4,000 National Guard troops into Minneapolis. Authorities said that number would soon rise to nearly 11,000.

Just a few days before, officers were forced to evacuate from the 3rd Precinct when rioters set that building ablaze.

According to Minnesota Department of Corrections Commisioner Paul Schnell, soldiers and police were still working to clear crowds into the next morning.

RELATED: Dozens of people arrested as National Guard moves in to bring control to Twin Cities

Soldiers reportedly stood guard throughout the night protecting major sites in the Twin Cities including the state capitol.

President Donald Trump appeared to cheer on the tougher tactics, commending the National Guard deployment in Minneapolis and declaring “No games!”

Throughout the country, the National Guard had arrived to support local authorities overwhelmed by the chaos. Overnight curfews were imposed in more than a dozen major cities nationwide, including Atlanta, Denver, Los Angeles, Minneapolis, San Francisco and Seattle.

At least 13 police officers were injured in Philadelphia, and at least four police vehicles were set on fire on Saturday. In New York City, dangerous confrontations flared repeatedly as officers made arrests and cleared streets. A video showed two NYPD cruisers lurching into a crowd of demonstrators who were pushing a barricade against one of them and pelting it with objects. Several people were knocked to the ground. It was unclear if anyone was hurt.

In Georgia, Georgia Gov. Brian Kemp authorized the deployment of up to 3,000 National Guard troops to Athens, Savannah and any other cities where more demonstrations were planned. Kemp had already approved up to 1,500 Guardsmen to help enforce a 9 p.m. Saturday curfew in Atlanta.

RELATED: Protesters gather in major US cities on Saturday over death of George Floyd

A fourth day of violence in Los Angeles prompted the mayor to impose a rare citywide curfew and call in the National Guard after demonstrators clashed repeatedly with officers, torched police vehicles and pillaged businesses in a popular shopping district.

Mayor Eric Garcetti said Saturday he asked Gov. Gavin Newsom for 500 to 700 members of the Guard to assist the 10,000 Los Angeles Police Department officers. The Guard members were expected to arrive early Sunday.

The Associated Press contributed to this story. This story was reported in Los Angeles.